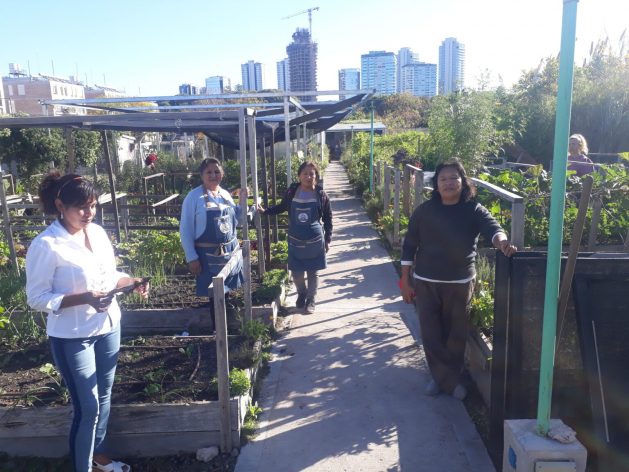 Elizabeth Cuenca, Jesusa Flores, Flora Huamán and Ángela Oviedo (from left to right) stand in the agroecological garden they tend with 10 other women in Rodrigo Bueno, a poor neighborhood in Buenos Aires. In the background loom the high-rises of Puerto Madero, the most modern and sought-after neighborhood in the Argentine capital. CREDIT: Daniel Gutman/IPS

BUENOS AIRES, Apr 21 2022 (IPS) - The space consists of just 300 square meters full of green where there is an agro-ecological vegetable garden and nursery, which are the work and dream of 14 women. Behind it can be seen the imposing silhouettes of the high rises that are a symbol of the most modern and sought-after part of Argentina’s capital city.

But the Vivera Orgánica (Organic Nursery) forms part of another reality: it is located in a low-income neighborhood which has been transformed in recent years thanks to the work of local residents and to government support.

“We started with the idea of growing some fresh vegetables for our families. And today we are a cooperative that opens its doors to the neighborhood and also sells to people who come from all over the city, and to companies,” Peruvian immigrant Elizabeth Cuenca, who came to Buenos Aires from her country in 2010 and settled in this neighborhood on the banks of the La Plata River, tells IPS.

The Barrio Rodrigo Bueno emerged as a shantytown in the 1980s on flood-prone land in the south of Buenos Aires.

It is just a few blocks from Puerto Madero, an area occupied for decades by abandoned port warehouses, which since the 1990s has been renovated and gentrified, experiencing a real estate boom that has made it the most sought-after by the wealthy in Buenos Aires.

The contrast between the exposed brick houses of Rodrigo Bueno, separated by narrow, often muddy corridors, and the slick glassy 40- or 50-story skyscrapers built between the wide streets of Puerto Madero became a powerful image of inequality in Greater Buenos Aires, a megacity of nearly 15 million inhabitants.

However, today things are completely different in Rodrigo Bueno, named after a popular singer who suffered a tragic death in 2000.

It is one of the four shantytowns in the city (out of a total of about 40, according to official figures) that are in the process of urbanization – or “socio-urban integration”, as the Buenos Aires city government describes the process.

Since 2017, streets have been widened and paved, infrastructure for public service delivery was brought in, and 46 buildings with 612 new apartments were built, which now house nearly half of the neighborhood’s roughly 1,500 families.

Many of the old precarious houses were demolished while others still stand alongside the brand-new apartments, awarded to their new owners with 30-year loans.

“When the urbanization process began to be discussed, we started having skills and trades workshops and there was one on gardening, which was attended by many women who, although we lived in the same neighborhood, did not know each other,” says Cuenca.

“That’s how we learned, we organized ourselves and were able to get a space for the Vivera, which we inaugurated in December 2019. Today we sell vegetables and especially seedlings for people who want to start their own vegetable gardens at home. We don’t earn wages, but we generate an income,” she adds. 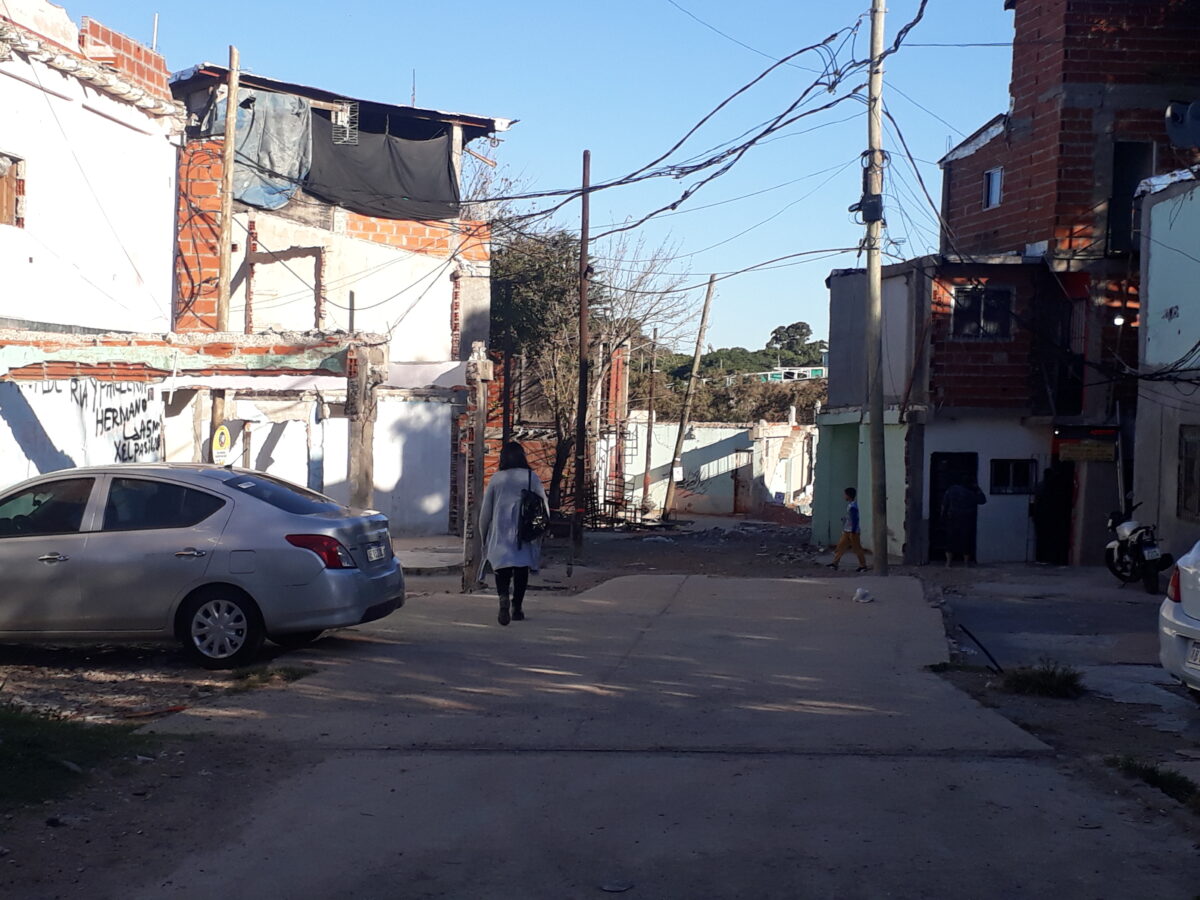 The paving of streets is progressing in the Rodrigo Bueno neighborhood, which first emerged as a shantytown on the banks of the La Plata River, where previously almost all the houses were accessed through narrow corridors, most of them made of exposed bricks and many of them built by the families themselves. CREDIT: Daniel Gutman/IPS

In just over two years, the women of the Vivera Orgánica have achieved some milestones, such as the sale of 7,000 seedlings of different vegetables to the Toyota automobile company, which gave them as gifts to its employees.

They have also sold agroecological vegetables to the swank Hilton Hotel in Buenos Aires, which is located in Puerto Madero, and have set up vegetable gardens on land owned by Enel, one of the largest electricity distributors.

But they have also earned respect from the public. “The incredible thing is that the pandemic was a great help for us, because many people who couldn’t leave their homes started to become interested in eating healthier or growing their own food. We received a lot of orders,” says Jesusa Flores, a Bolivian immigrant who is one of the founders of the Vivera.

She was working as a cleaner and caring for the elderly in family homes, when she lost her jobs due to the restrictions on movement aimed at curbing the COVID pandemic.

“La Vivera has been very important for me, because it is near our homes and we can always come here,” says Flores.

The nursery receives no government subsidies and the 14 women earn little money from it, so almost all of them have other jobs. But they are all confident that they have the potential to grow and that the nursery will become their only job in the future.

“During the worst period of the pandemic, we put together 15 boxes a day with 12 seedlings to sell, but we received 60 orders a day. We couldn’t keep up with demand,” says Angela Oviedo from Peru, who is also a member of the group. 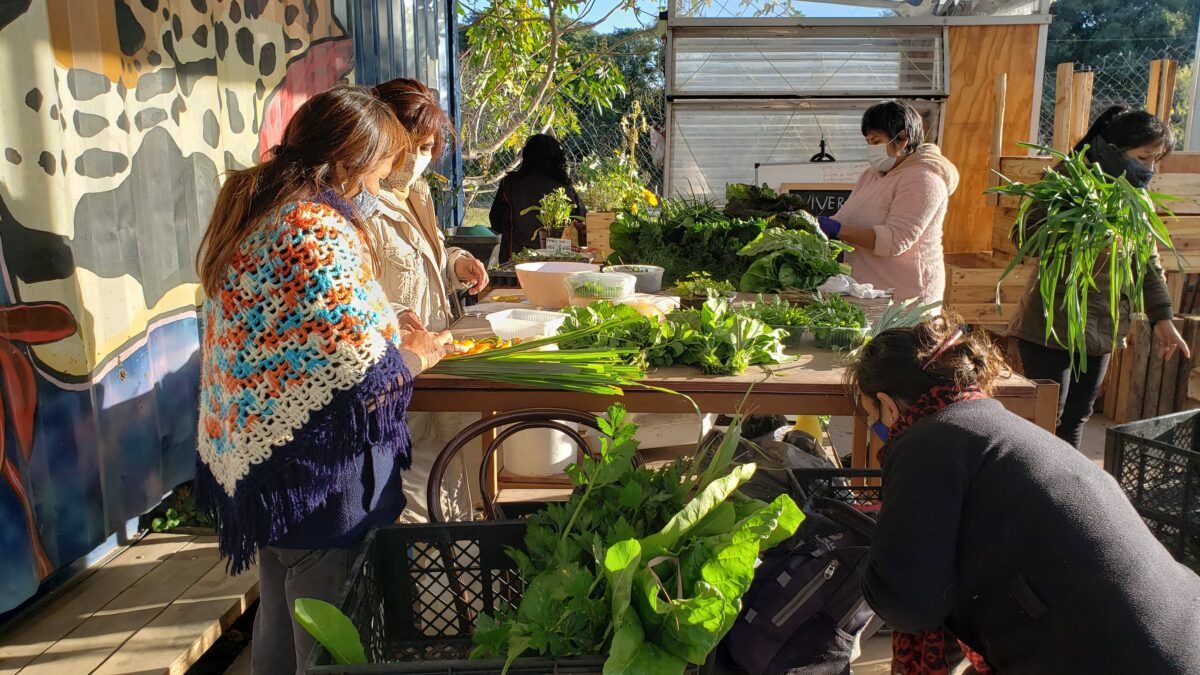 Several women prepare the products of the Vivera Orgánica, next to part of a mural painted on the door of the container that serves as the office of their small business in a low-income neighborhood in the Argentine capital. CREDIT: Ministry of Human Development and Habitat of the City of Buenos Aires

The hurdles thrown up by informal employment

The Buenos Aires city government provides technical support for the Vivera Orgánica as part of the neighborhood’s socio-urban integration process.

Low-income sectors in Argentina have been hard-hit since the process of devaluation of the peso began four years ago, accompanied by high inflation, leading to a steep plunge in purchasing power, especially for workers in the informal economy.

In 2020 the crisis was exacerbated by the COVID-19 pandemic, which caused the economy to shrink by 10 percent. And while almost all of the losses were recovered in 2021, the alarming fact is that most of the jobs that have been created since then are informal.

According to data from the Argentine Ministry of Labor, Employment and Social Security, in January this year there were 6,034,637 registered workers in the private sector, down from 6,273,972 in January 2018, before the start of the recession.

The Buenos Aires city government’s Ministry of Human Development and Habitat estimates that there are some 500,000 workers in the informal economy in the capital, who have been the hardest hit by inflation, which reached 6.7 percent last March, the highest rate for a single month in Argentina in the last 20 years.

Many analysts warn that poverty, which in the second half of last year fell from 40.6 percent to 37.3 percent according to the National Institute of Statistics and Census, will grow again in 2022. 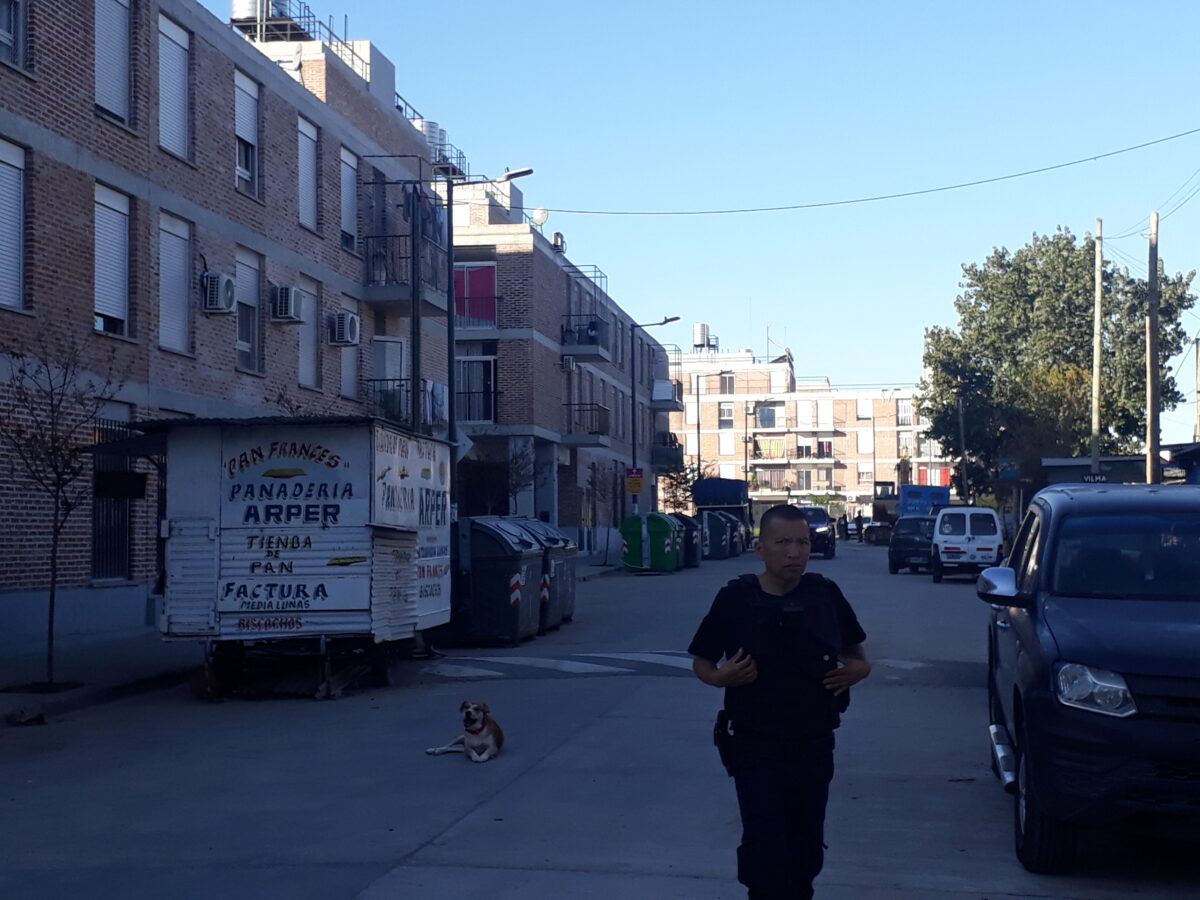 A picture of some of the buildings constructed by the Buenos Aires city government in the Rodrigo Bueno neighborhood. A total of 612 new apartments have already been delivered, through 30-year loans, to the families that lived closest to the river and were most exposed to pollution in this poor neighborhood in the Argentine capital. CREDIT: Daniel Gutman/IPS

Assistance in joining the formal sector

“In poor neighborhoods there are many businesses, but the problem is that because of the situation in the informal economy, they face enormous hurdles in order to grow and to be able to connect with the formal market,” explains Belén Barreto, undersecretary for the Development of Human Potential in the government of Buenos Aires.

“One issue has to do with productivity: in general, the entrepreneurs work in their own homes and are not able to scale up significantly. That is why we support the Vivera with technical assistance, so the project can reach production levels enabling it to sell in the city’s formal value chains,” she adds in an interview with IPS.

Barreto says that another obstacle has to do with marketing: entrepreneurs find it difficult to sell their products outside the environment in which they live, despite the growth of on-line sales.

“That is why our focus is on linking these small businesses with companies so that they can become their suppliers in order to earn a more sustainable income and scale up their production through a new market. Last Christmas we held business roundtables and managed to get more companies to buy gifts from the social and popular economy, for a total of 17 million pesos (about 150,000 dollars),” she adds.

Finally, to address the problem of access to credit for informal workers, in 2021 the Buenos Aires city government created the Social Development Fund (Fondes), a public-private fund for the social and popular economy.

The steady growth of the informal economy also prompted the local government to create last year the Registry of Productive Units of the Popular and Social Economy, which allows access to tax benefits and has so far registered some 3,000 self-managed units.

The transformation of the neighborhood has also brought greater opportunities for local residents, who are often victims of discrimination and prejudice.

Cuenca, for example, explains that “we didn’t used to have an address to give when we were looking for a job, and it was very unlikely that we would get called back.”

She sees the Vivera Orgánica as another tool for a more dignified life: “This project is part of the neighborhood and part of us; we now feel that we have different prospects.”