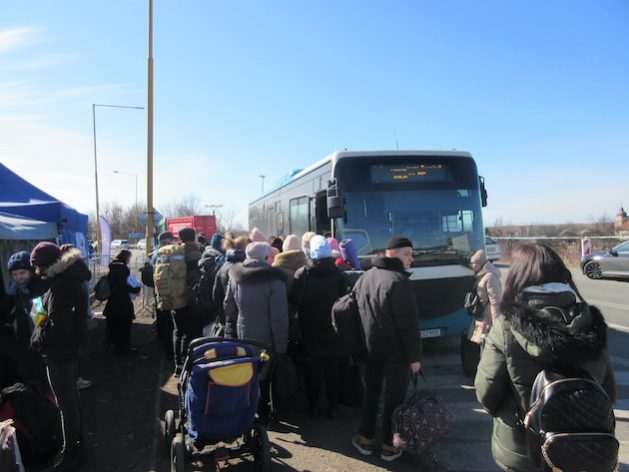 BRATISLAVA, May 25 2022 (IPS) - An ultraconservative group in Poland has begun checking with hospitals to find out if Ukrainian refugees are being offered terminations in line with the country’s strict abortion laws amid warnings refugee victims of rape are struggling to access local help and clinical services.

Increasing evidence of sexual violence by Russian troops in Ukraine has emerged in recent weeks, and in neighbouring states, including Poland, local organisations have reported refugees contacting them about terminations.

But Poland, which has taken in 3.5 million of the 6.4 million refugees who have fled Ukraine since the Russian invasion, has some of the world’s strictest abortion laws. Terminations are only permitted where the pregnancy threatens the mother’s life or health or if it results from a criminal act, such as rape or incest.

In the latter instance, confirmation of the crime must be given by prosecutors, and the Catholic fundamentalist organisation Ordo Iuris has admitted it has been checking with hospitals about this.

In a letter seen by Polish media, the group asked a Warsaw hospital to provide information on what terminations due to a criminal act it provided between February 1 and May 11. It also asked whether they had been provided to Polish women or foreigners and if, where necessary, official confirmation of rape had been provided by prosecutors.

The group admitted it had asked other hospitals for similar information and said it believes pro-choice groups could be using the rape exception to Poland’s almost total ban on abortions to help Ukrainian women skirt round legislation and get what would essentially be “abortion on demand”.

Katarzyna Gesiak, director of Ordo Iuris’ centre for medical law and bioethics, told Polish news site Wirtualna Polska: “We are aware of what the pro-abortion groups are currently doing. They place a strong emphasis on special treatment of Ukrainian women when it comes to the rape premise [for abortion]

“[But] Polish law is what it is. It doesn’t matter what country a person comes from. Without [requiring] a prosecutor’s opinion, it would be abortion on demand, without verifying if the woman is telling the truth that she was raped… Some people will always want to take advantage of a given situation.”

The claim has been dismissed by activists working with victims of gender-based and sexual violence. They say it is so difficult that the exception is meaningless.

“Getting proof from a public prosecutor that you were raped – think about how long that would take! It would just take so much time. It makes it not worth bothering with,” Mara Clarke of the UK-based Abortion Support Network, which has a Polish-based helpline, told IPS.

As well as complying with the stringent laws on terminations, they must also battle widespread stigmatisation fuelled by a vocally anti-abortion government with a close relationship to a Catholic Church widely seen as having a great influence on its policies.

Meanwhile, leaders in the Catholic Church, which, although viewed negatively by increasing numbers of Poles, still holds a central position in society – in a survey last year, 92% of the population identified as Catholic – fervently promote their support of strict legislation on terminations.

Anti-abortion campaigners have been promoting their message among refugees fleeing the war in Ukraine.

As they come over border crossings into the country, refugees are greeted with posters and flyers carrying warnings about jail terms for breaking local abortion laws, images of miscarried foetuses, and a quote from Mother Theresa saying: “Abortion is the greatest threat to peace”.

Rights activists say this can add to the trauma of those arriving from a country with more liberal laws. In Ukraine, terminations upon request are legal for up to 12 weeks and under certain circumstances to 28 weeks. The government also provides emergency contraception without prescription – for those who have suffered sexual violence or who, for other reasons, may want to terminate their pregnancy.

“It can be quite a shock when a woman from Ukraine arrives in Poland, having previously planned to terminate her pregnancy in Ukraine, or having found herself with another pregnancy that she doesn’t want to continue. There’s a high level of distress finding out that access to services is basically impossible within Poland,” Julie Taft, humanitarian director at the International Planned Parenthood Federation (IPPF), told international media.

The situation has already come to the attention of the United Nations High Commissioner for Refugees (UNHCR), which has demanded refugees coming to Poland must have access to reproductive rights that meet international standards, including abortions.

UNHCR communication officer in Poland, Olga Sarrado Mur, told IPS: “We are engaging with government structures and have established co-operation with local civil society groups to ensure victims of gender-based violence, including rape victims, can access the support they need, including legal, psychological, and clinical services, in a timely manner and in a way that does not stigmatise those victims or put them off trying to access them.”

“Reports suggest that barriers may put some women off trying to access them. This needs to be addressed,” she added.

However, it is unclear what the UNHCR could do to ensure Ukrainian refugees who are victims of sexual violence can get abortions under Polish law, given the strictness of local legislation. The time it would take for prosecutors to confirm any rape, notwithstanding the difficulties Polish law enforcement would face investigating a crime which would likely have taken place hundreds of miles away in a war zone.