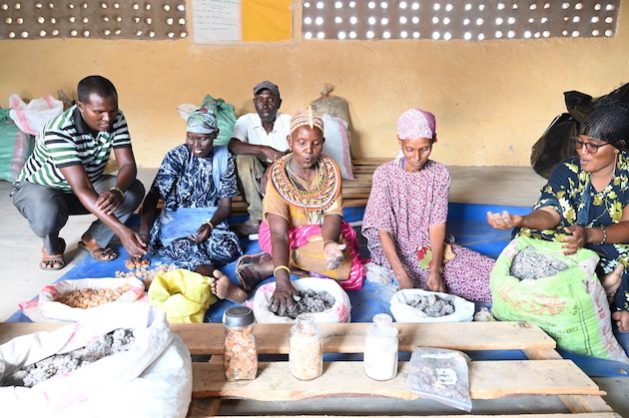 Nairobi, Jun 16 2022 (IPS) - Clad in traditional regalia and necklaces of richly coloured beads that form magnificent patterns around their necks, an army of women from the pastoral Rendile community that resides at the heart of Marsabit, a county in Kenya’s arid north, is on a mission.

Shoulder-to-shoulder, they are walking towards economic freedom armed with relevant tools up the hill to tap gum and gum-resins from acacia trees.

“We face a myriad of challenges. First, we have to fetch water before harvesting gum from acacia trees. We then sort and dry it before taking it to the market for sale. From gums and gum-resin sales, I am able to meet my family’s needs. No need to sell my sheep and goats at a throw-away price,” says Caroline Sepina, a 47-year-old mother of six, as she carefully sorts the gum, which retails at $ 5 (Ksh 550) per kilogram.

There are no men within the manyattas in Ndikir, a village located in the Marsabit sub-county. Because of the drought, men have had to move to the nearby Samburu county, searching for pasture and water for their livestock.

Here, the women are left behind, but unlike in the past, when they would be unemployed, they now have alternative livelihoods which complement their livestock.

According to Leuwan Kokton, assistant chief of the Ndikir sub-location, men usually migrate with the livestock to the nearby Samburu county to avoid severe drought, with a few livestock left to help cater for children’s upkeep and sometimes, medication.

“Through this economic venture, I do not have to sell sheep from my herds to cater for my household needs. All I need to do is just walk to the nearby trees and tap the non-wood products, then sell them at the market. This helps me preserve my sheep and goats,” Joseph Longelesh, a resident of Ndikir village told IPS in an interview.

The gums and gum-resins of commercial importance collected from the forests in Kenya include arabic, myrrh, hagar and frankincense. Kenya has resources of gums and resins with commercial production confined to the country’s drylands. Gum arabic comes from Acacia senegal or Acacia seyal, while commercial gum resins are myrrh from Commiphoramyrrha, Hagar from Commiphora holtziana and Frankincense from Boswellia neglecta S.

Tommaso Menini, the managing director for African Agency for Arid Resource (AGAR), told IPS that gum and resin are directly connected to environmental conservation. The idea is to make the pastoral communities see an alternative source of livelihood apart from livestock.

“Hagar is now an incredibly sought-after product from mostly Chinese buyers because it is highly used in their traditional medicine. Having a nearly 1.4 billion Chinese population means that the demand is high,” Menini told IPS.

“In the last years, we have seen an increasing presence of Chinese buyers setting up a base in Kenya. Before, we had agents who would send several containers to China, but since they are setting up in Kenya, they are now driving prices up because there is more demand.”

For Janet Ahatho, assistant natural resources Director at Marsabit County, these non-wood products have been in existence. Still, the locals had not been exposed to its economic potential and how to exploit them for monetary gains.

“As a county government, we have mapped the areas and worked with the locals. The people who collect the products and sell them are the herders themselves. They have attached that kind of importance to these trees, hence helping in environmental conservation,” says Ahatho.

In Marsabit county, these non-wood products are commonly found in Laisamis, Moyale and North Horr sub-counties.

“Environment destruction is reduced because we have environmental management committees in each sub-county, and they are the ones engaging the collectors and the sellers of the product. They are trained to train the community on why it is important to conserve the tree species,” says Ahatho.

In 2005, the  Regional Centre for Mapping of Resources for Development, through the technical cooperation programme of the UN Food and Agricultural Organisation (FAO), carried out resource assessment and mapping of gums and resins in Kenya.

For Ilkul Salgi, the World Vision’s Integrated Management of Natural Resources for Resilience in Arid and Semi-Arid Lands (IMARA) field officer, the locals who reside in arid counties, including Marsabit, are usually faced with drought, conflicts and how to conserve the environment amid the climate crisis.

Engineer Chidume Okoro, a Network for Natural Gums and Resin in Africa (NGARA) chairperson, says production is far from sustainable, particularly for frankincense, with debarking frequently damaging or killing trees.

According to Chidume, production of gum and resin in large quantities for commercial purposes should be done with great care, by training the locals on how to do it sustainably while saving the acacia trees.

“With much focus on exporting bulk raw materials and poor management of the resource, export markets are underexploited. Gender inequities and power imbalances exist and in some cases have led to unequal access and control over benefits from these natural resources,” Okoro told IPS.

Since exploring the non-wood products, Sepina says her children have always had balanced meals, and she can pay her children’s school fees.