Public Land Protection Cells in India: A New Hope for Our Commons 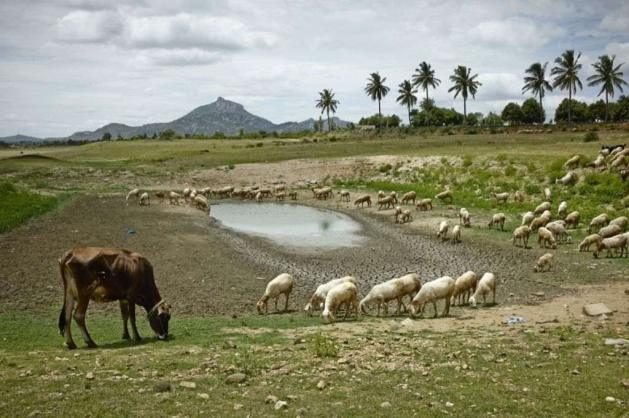 ANAND, India, Jun 3 2022 (IPS) - Common lands are natural resources that are used collectively by a community, such as forests, pastures, ponds, and ‘wastelands’. They act as a resource base for non-cash, non-market economies that provides fodder, fuelwood, water, oils, fish, medicinal herbs, and a wide variety of fruits and vegetables to the local communities.

Various studies estimate that common lands contribute between 12 and 23 percent to rural household incomes. They also capture carbon, act as repositories of biodiversity, and relics of indigenous knowledge.

India’s common lands have been steadily declining. Grazing lands alone faced a 31 percent loss in total area between 2005 and 2015. The pressures from rapid industrialisation, over-utilisation, and more perceivable ‘productive’ land uses like agriculture, infrastructure, and extraction are driving the change in the landscape. India’s clean energy transition is the latest addition to the mix.

India’s common lands have been steadily declining. Grazing lands alone faced a 31 percent loss in total area between 2005 and 2015. The pressures from rapid industrialisation, over-utilisation, and more perceivable ‘productive’ land uses like agriculture, infrastructure, and extraction are driving the change in the landscape. India’s clean energy transition is the latest addition to the mix

Common lands are also vulnerable to encroachments and private expropriation as tenure is less likely to be legally recognised in common lands than in private lands. Fuzzy boundaries that lead to costly and incomplete enforcement and overlapping land and property laws compound this issue.

To tackle this problem, on January 28, 2011, the Supreme Court of India pronounced a landmark judgement to set in motion a mechanism for the preservation of common resources across the country. In the case titled Jagpal Singh & Ors vs State of Punjab & Ors, the court recognised the socio-economic importance of common lands and directed state governments to prepare schemes for speedy removal of encroachments. The lands were then to be restored to the gram panchayat for the common use of the village.

This judgement provided hope and momentum for rural communities to reclaim the lands they had lost to encroachments, and prompted state governments to evolve mechanisms for protection, management, and restoration of common resources through programmes like MGNREGA. It also served as an inflection point for lower courts to develop jurisprudence over common lands in the country.

What are public land protection cells?

Common lands cover 36 percent and 37 percent of the total land area of Rajasthan and Madhya Pradesh respectively, and ensure dignity, security, and livelihoods for millions of rural people. At the same time, the state courts have been inundated with public interest litigations over their encroachments.

Taking this into account and following the footsteps of the Jagpal Singh judgement, the Rajasthan High Court in 2019 and the Madhya Pradesh High Court in 2021 directed the respective state governments to establish permanent institutions known as public land protection cells (PLPCs).

These cells receive complaints on encroachments of rural common lands, follow the due process of law to resolve such disputes, and restore the resources to the gram sabha or gram panchayat.

Today, PLPCs have been constituted in each district of the two states and are headed by the district collector. These institutions are a welcome intervention when more than two-thirds of India’s court litigations relate to land or property and most land conflicts relate to common lands.

At a PLPC, communities can defend their common lands by making a direct representation and avoid navigating through the complex land legislations. This reduces the need to engage professional legal assistance or pay court fees and thus allows a larger section of the population to access legal recourse at a much cheaper cost.

By institutionalising an alternative mechanism for dispute resolution, lengthy and costly court battles can be avoided and the judicial workload can be lowered. At present, the high courts only entertain cases where PLPCs do not intervene; assuming the role of a watchdog allows the judicial processes to monitor conduct and ensure accountability of these cells.

How can PLPCs be made more effective?

Despite being at a nascent stage, PLPCs are already proving to be instrumental in democratising legal information, building access to justice, and providing swift redress in encroachment cases. However, the larger role that PLPCs can play for the management and governance of common lands, beyond just settling issues of encroachments, needs to be explored further.

‘Land’ is a subject that comes under the purview of the states. More often than not, common lands are legally classified as a subset of ‘government lands’, unless the ownership of a governmental department (such as the forest department) is already established.

The responsibility to survey, record, and maintain land records also lies with the state revenue departments. Simultaneously, the Panchayati Raj system assigns the gram panchayats the duty to manage and protect the village common lands.

However, experience from the ground shows that, while access and usage rights are usually recognised at the local level, they are not formally recorded. Even when common lands are entered into permanent land records, they are not routinely updated.

Spatial identification of their boundaries is also missing. Such informational gaps weaken the claim of the community, lead to poor use and neglect of common lands, and encourage private encroachments with little to no defense.

An ideal PLPC can attempt to address some of these barriers and focus on preventing encroachments rather than removing them as a corrective measure. For instance, a strong step forward can be to undertake comprehensive identification, survey, and boundary demarcation of common lands and prepare cadastral maps.

The Digital India Land Record Modernization Programme, which seeks to overhaul the management of land records, is also largely focused on private land ownership and titling. Common lands have also been omitted from the latest SVAMITVA Scheme, which uses drone technology to survey inhabited rural areas and formalise land tenure.

PLPCs can undertake a similar exercise to create an open-access, spatially referenced database for common resources and bring them to the foreground of land governance. They can then enable the database to be synchronised with panchayat asset registers, lay the groundwork for social audits, and be the baseline to monitor encroachments.

Recently, in an attempt to deal with rampant encroachments across the state, the Madras High Court directed the Tamil Nadu government to conduct satellite imaging of all water bodies and maintain them for each district as a reference point that these resources were once intact. The PLPCs could assume this responsibility by design.

To achieve responsive governance of common resources, the effectiveness of a top-down rule of law approach, which puts encroachments at the centre stage, needs to be evaluated. Land is a political issue, and thriving common lands characterise social capital, social cohesion, and social harmony.

PLPCs can thus focus on more effective interventions to support panchayats and village institutions in managing these resources. Working to improve social relations, while having conflict resolution as an auxiliary arm, may deliver more just outcomes.

Pooja Chandran is an environmental lawyer, policy researcher, and senior project manager at the Foundation for Ecological Security.

Subrata Singh is programme director at the Foundation for Ecological Security