What Future for a World of 8 Billion?

The writer is Director, Population Division of the United Nations, Department of Economic and Social Affairs. 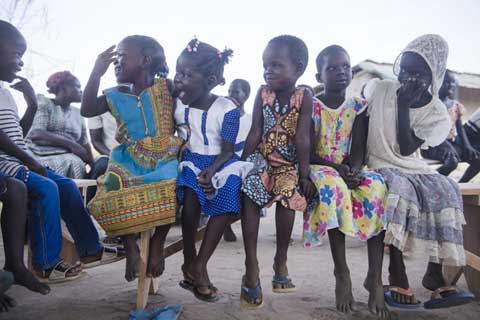 UNITED NATIONS, Jul 11 2022 (IPS) - What does a young girl from Juba, in South Sudan, an 8-year-old boy living in the slums of Mumbai, in India, a young mother from the south of Lima, in Peru, and an 83-year-old man enjoying retirement in the suburbs of Stockholm, in Sweden, have in common?

Many things, perhaps, but here is one of the most important: they are all members of the human population, whose size will surpass 8 billion people in mid-November 2022. They are part of a common humanity that aspires to live peacefully and in dignity, that desires access to quality education, adequate living conditions and decent work, and that hopes to enjoy a long, healthy and fulfilling life.

Even though all of them are part of the same humanity, the challenges and opportunities that they face in their daily lives are drastically different.

In 2015, Member States of the United Nations adopted the 2030 Agenda for Sustainable Development. At the core of this agenda are 17 Sustainable Development Goals (SDGs), which constitute an ambitious call-for-action to end poverty and hunger, protect the planet and improve the current lives and future prospects of all people everywhere.

Reducing social and economic inequalities is at the heart of the 2030 Agenda. Yet many inequalities persist and are deepening, both within and across countries and regions. Today, the probability of living a long, healthy and fulfilling life, and the challenges and opportunities that people encounter every day, differ vastly around the world.

In countries where deaths outnumber births, the population is increasing very little, if at all. In some cases, it has already started to decline or will do so soon. In some of these countries, immigration helps to counter the population loss due to an excess of deaths over births.

In other countries, emigration is exacerbating the loss of population linked to a low birth rate. As the proportion of the population above age 65 continues to grow, the shifting population places additional fiscal pressure on social security, public pension and health-care systems.

In low-income countries, where economic growth may struggle to keep up with population growth, alleviating poverty and countering high levels of inequality is a major challenge. Lack of access to resources deprives individuals of opportunities and choices.

Inadequate access to family planning services perpetuates high levels of childbearing, often starting early in life, and contributes to rapid population growth. Such growth generates ever-larger cohorts of children and young adults, whose experiences early in life will shape their prospects for success.

A sustained drop in the fertility level can stabilize the number of children and youth in a population, facilitating increased investments per child in health care and education. With such changes, along with measures to ensure access to decent work, a large and youthful population presents an opportunity for accelerated social and economic development—a phenomenon known as demographic dividend.

Today, less than 16 per cent of the global population lives in high-income countries, a percentage that is expected to fall to 13 per cent by 2050. By contrast, low-income and lower-middle-income countries are home to more than half of the world’s population (9 and 43 per cent, respectively).

The proportion of the global population living in these two groups of countries is projected to grow to more than 60 per cent by 2050. Indeed, the future growth of world population will take place mostly in low-income and lower-middle-income countries. 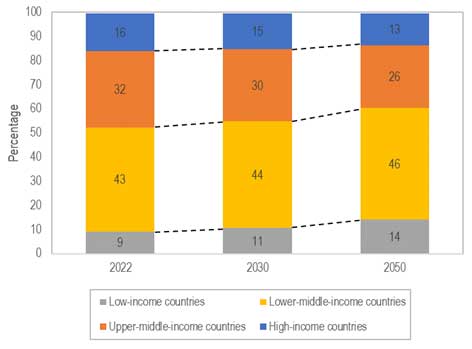 The higher rate of population growth in low-income and lower-middle-income countries is fueled by declining mortality, with fertility remaining at comparatively high levels. If the population of these countries continues to grow at the current rate, their combined size will double in about 26 years.

Today, in low-income countries, a woman gives birth to 4.5 children on average over a lifetime. This figure is projected to drop just below 3 births per woman in 2050. By comparison, women in high-income countries currently bear, on average, 1.6 children.

Despite a slight convergence that is anticipated over the coming decades, these vast differences are expected to remain largely intact.

Unequal outcomes for people across the globe call for renewed action and investment. Countries and the international community need to redouble their efforts to advance the achievement of the Sustainable Development Goals and to ensure that no one is left behind. Whether a girl in Juba or a boy in Mumbai will enjoy a long, healthy and fulfilling life depends on the world’s commitment to ensuring that all 8 billion inhabitants of the planet will have genuine opportunities to find success.