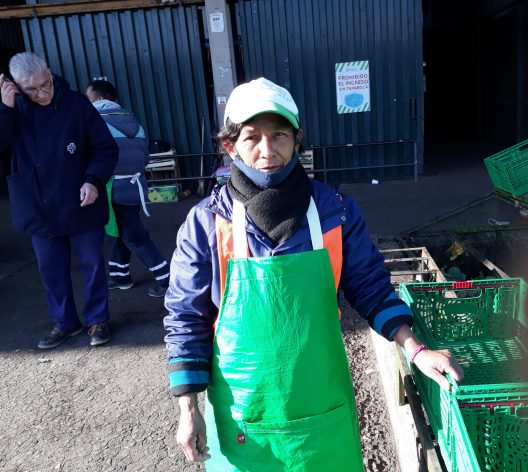 Tomasa Chávez, bundled up against the cold of the southern hemisphere winter, works at the Central Market in Buenos Aires, where she was hired in 2021 to separate edible waste that can be recovered. Until then, she went there daily on her own for 30 years to look for food and other recyclable materials among the waste that has now been given new value. CREDIT: Daniel Gutman/IPS

BUENOS AIRES, Jul 6 2022 (IPS) - For 30 years, Tomasa Chávez visited the Central Market of Buenos Aires and rummaged through the tons of fruits and vegetables that the stallholders discarded, in search of food. Today she continues to do so, but there is a difference: since 2021 she has been one of the workers hired to recover food as part of a formal program launched by the Central Market.

“Before, I used to come almost every day and collect whatever was edible and whatever could be sold in my neighborhood. Food, cardboard, wood… Now I still come to separate edible food, but I work from 7:00 to 15:00 and I get paid some money,” the short, good-natured woman told IPS.

The Central Market of the Argentine capital is a universe that seems vast and unfathomable to those who venture into it for the first time.

Covering 550 hectares in the municipality of La Matanza, on the outskirts of Buenos Aires, it is full of life; to describe it merely as a central market that supplies fruits and vegetables to a metropolis of 15 million inhabitants would be an oversimplification.

In the market there are large companies and small businesses, streets, avenues, warehouses, buildings and even areas taken over by homeless people and a rehabilitation center for people with substance abuse problems. In some places people are crowded among crates of fruit and the noise is overwhelming, but there are also large empty areas where everything is quiet.

Nearly 1,000 trucks enter the Central Market every day to pick up fresh food that is sold in the stores of the city and Greater Buenos Aires. Every month, 106,000 tons of fruits and vegetables are sold, according to official data.

There is also a retail market with food of all kinds, attended by thousands of people from all over the city, in search of better prices than in their neighborhoods, in a context of inflation that does not stop growing – it already exceeds 60 percent annually – and which is destroying the buying power of the middle class and the poor. 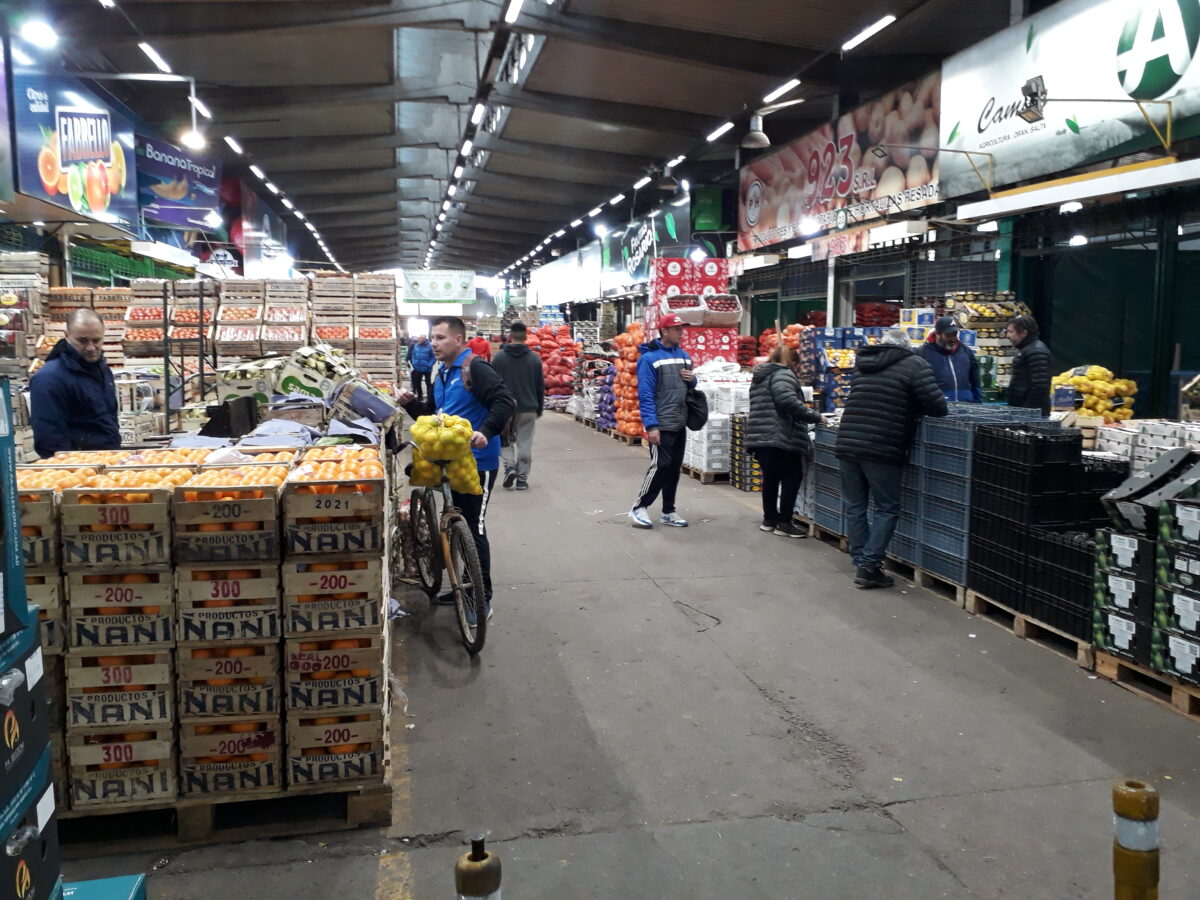 View of one of the 12 bays where the fruits and vegetables that supply the 15 million inhabitants of the Greater Buenos Aires region are sold wholesale. The activity begins at 2:00 a.m. and every day some 1,000 trucks enter the market and some 10,000 people work there. CREDIT: Daniel Gutman/IPS

As a reflection of the social situation in Argentina, where even before the COVID-19 pandemic the poverty rate exceeded 40 percent, a common image of the Market has been that of hundreds of people like Chávez rummaging through the waste, looking for something to eat or to sell.

But since August 2021, much of that energy has been poured into the Waste Reduction and Recovery Program, which is based on two main ideas: to use food fit for consumption for social assistance and the rest for the production of compost or organic fertilizer to promote agroecology.

“There was a social and environmental problem that needed to be addressed. Today we have fewer losses, we provide social assistance and create jobs,” Marisol Troya, quality and transparency manager at the Central Market, told IPS.

Coping with the crisis

The 12 gigantic bays where fruits and vegetables are sold wholesale are the heart of the Central Market, which employs 800 people and where a total of 10,000 people work every day.

At 2:00 a.m. the activity begins every day in the market with frenetic movement of crates containing local products from all over Argentina and neighboring countries, which are a festival of colors. Each bay has 55 stalls. 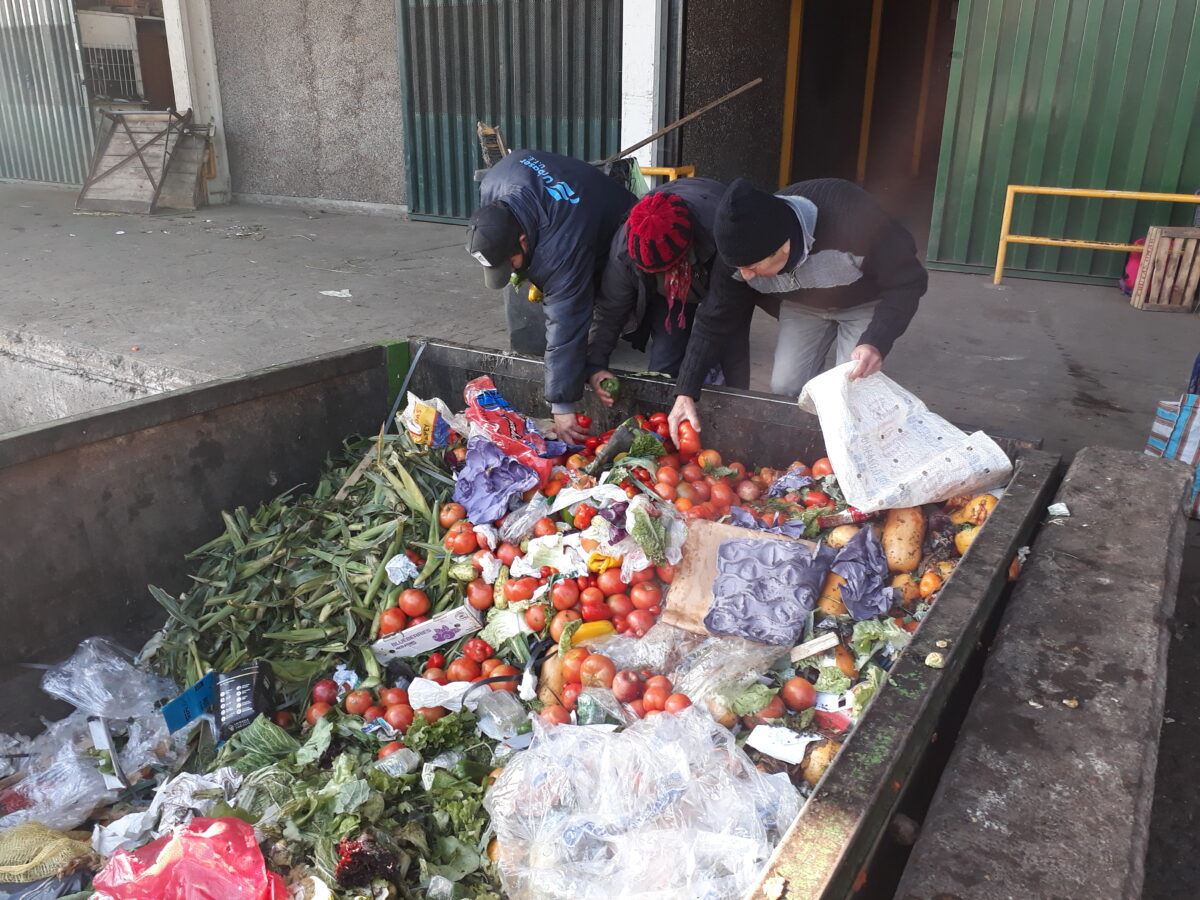 Three people look for food in a container of discarded products at the Central Market of Buenos Aires, where more than 100,000 tons of fruits and vegetables are sold every month to supply retail stores in the Argentine capital and its suburbs. With the recovery program, the Market seeks to provide environmental and social solutions. CREDIT: Daniel Gutman/IPS

“The search for food among the Market’s waste was spurred by the economic crisis and the pandemic,” said Marcelo Pascal, a consultant to the management. “We realized very quickly that there was a lot of merchandise in good condition that was discarded for commercial reasons but could be recuperated.

“There were even small stands that used vegetables found in the garbage. A lot of edible products were recovered, but the process was disorderly, so an effort was made to organize it,” he told IPS.

From August 2021 to June 2022, 1,891 tons of food were recovered for social aid, while 3,276 tons have been used to make compost, according to official figures from the Central Market, which is run by a board of directors made up of representatives of the central, provincial and city governments.

“We have reduced by 48 percent the amount of garbage that the Market was sending to landfills for final disposal, which was 50 tons a day,” agronomist Fabián Rainoldi, head of the Waste Reduction Program, told IPS. 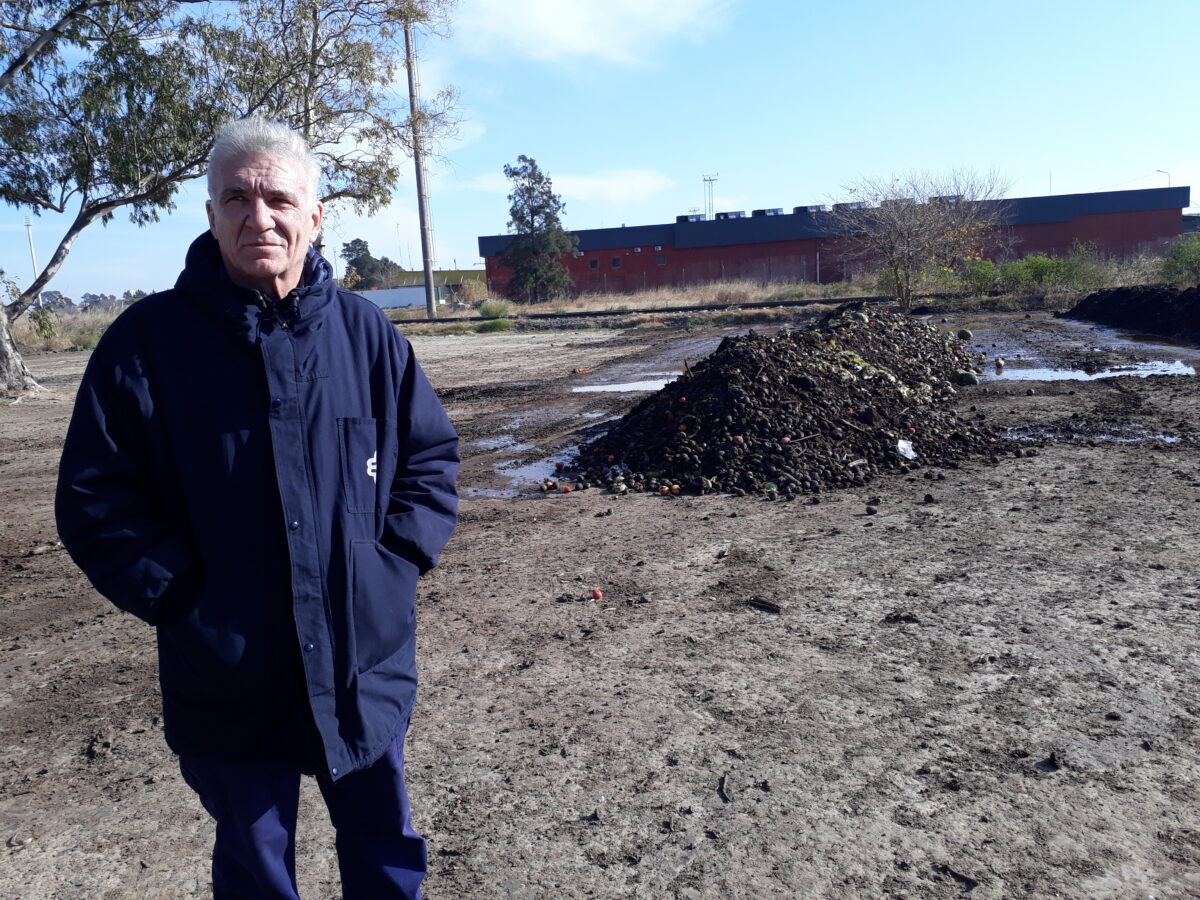 Fabián Rainoldi, head of the Waste Reduction and Recovery Program of the Central Market of Buenos Aires, stands in front of one of the mountains of organic waste that are used to produce compost, which serves as fertilizer for agroecological enterprises. CREDIT: Daniel Gutman/IPS

Justo Gregorio Ayala is working in an esplanade next to one of the wholesale bays. In front of him he has a crate of bruised tomatoes, impossible to sell at a store, but many of which are ripe and edible. His task is to separate the edible ones from the waste.

“I live here in the Market, in the Hogar de Cristo San Cayetano, and six months ago I got this job,” Ayala said, referring to the rehab center for addicts that opened in 2020 inside the Market itself.

“There were always a lot of products to recover in the Market, but now we do it better,” added Ayala, who is one of the workers hired for the Program.

He clarified, however, that the scenario varies depending on the temperature. “In summertime, because of the heat, the fruits and vegetables last much less time and the stallholders throw away more products. Now in winter we don’t find so much.”

The workers work in eight of the market’s 12 bays. There are a total of 24 workers, divided into groups of three, who separate the merchandise that the stallholders are asked to leave in the center of the bay.

The recovered goods are loaded onto trucks that are taken to a huge warehouse in the Community Action section of the Market, where they are prepared for use in social aid projects. 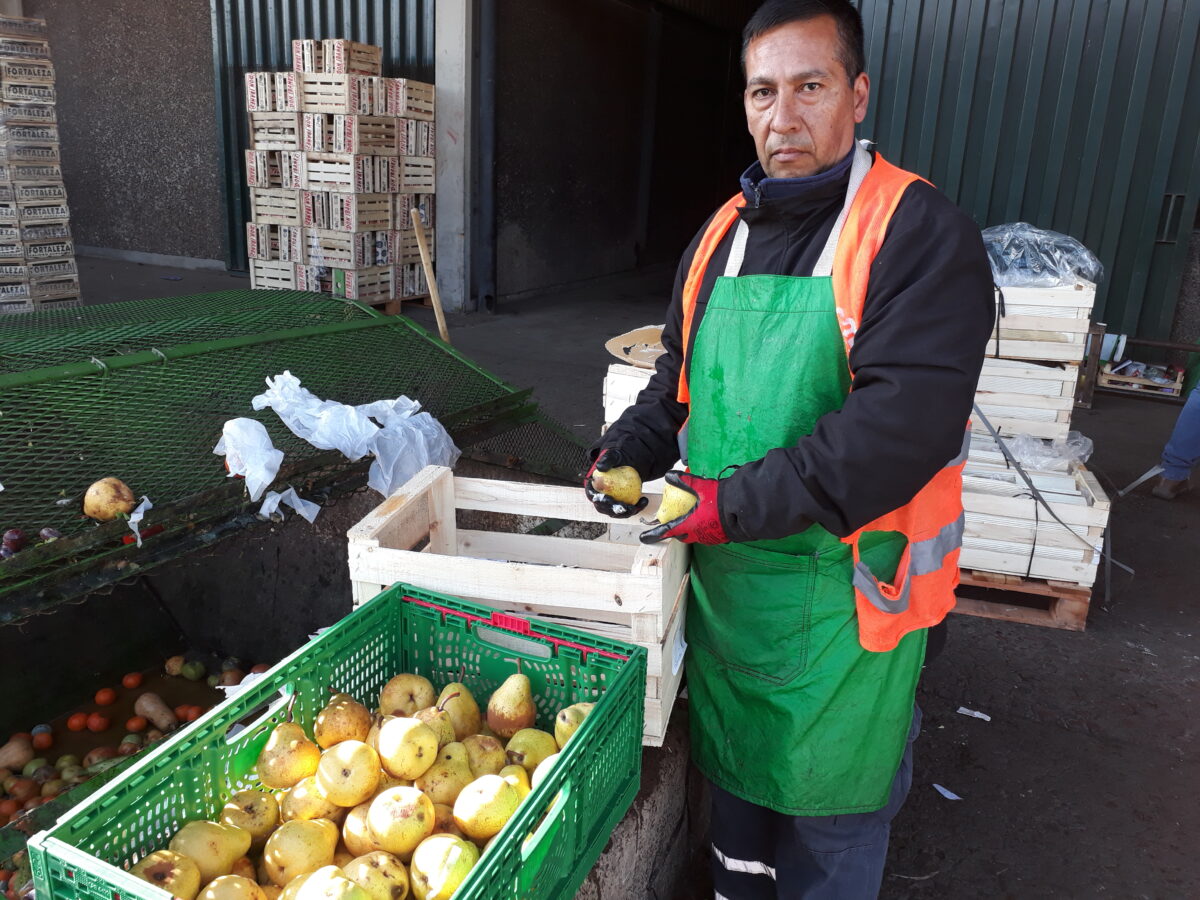 Justo Gregorio Ayala is one of the 24 workers who select edible fruits and vegetables discarded by vendors at the Buenos Aires Central Market. Since August last year, almost 19,000 tons of food fit for human consumption have been recovered and have gone to soup kitchens and other kinds of social assistance. CREDIT: Daniel Gutman/IPS

“We deliver food to 700 soup kitchens, according to a weekly schedule: about 130 per day,” said Martin Romero, head of the Community Action section, where 22 workers perform their duties, as the first vehicles begin to arrive to pick up their cargo.

“We also put together eight-kilo bags, with whatever we have available, which we deliver to 130 families,” he added to IPS.

What is not fit for human consumption ends up in the composting yard, a plot of land covering almost three hectares, where the process of decomposition of organic matter takes about four months.

“The organic waste is mixed with wood chips made from the crates, which absorb water and reduce the leachate that contaminates the soil. The organic compost is donated to agroecological gardens which use it for fertilization and the recovery of degraded soils,” explained Rainoldi.

The goal is a Central Market that makes use of everything and does not send waste to the dump. It’s a long road that has just begun.