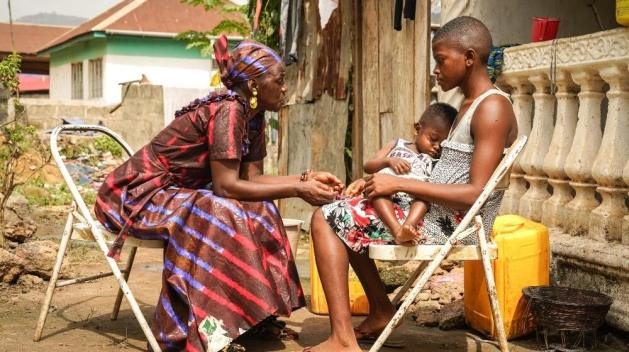 "When nearly a third of all women in developing countries are becoming mothers during adolescence, it is clear the world is failing adolescent girls,” said UNFPA Executive Director Dr. Natalia Kanem. Credit: Michael Duff/UNFPA

MADRID, Jul 8 2022 (IPS) - While women and girls have been so far enjoying some of their due rights in Western high-income countries, the overwhelming majority of teenagers and adult women in the impoverished regions of the current world’s population of 8 billions continue to suffer all kinds of inequalities.

Such a harsh reality does not only impact their basic human rights, like equal treatment, same rights as men in decision-making, working conditions, payment, property, healthcare, staggering poverty and a very long etcetera, but also the pressing need to guarantee their right to protection against all sorts of gender violence, abuse, rape, and the consequences of unwanted, unintended pregnancies in particular among teenagers and child girls.

Almost one third of women in developing countries had their first baby while they were still in their teens, the report shows, with nearly half of those new mothers aged 17 and younger – still children themselves

The UN Population Fund (UNFPA) released ahead of the 2022 World Population Day on 11 July, an extensive report titled the Gender and income inequalities driving teenage motherhood in developing countries.

Almost one third of women in developing countries had their first baby while they were still in their teens, the report shows, with nearly half of those new mothers aged 17 and younger – still children themselves.

Gender-based and income inequalities, adds the report, are highlighted as key in fuelling teen pregnancies by increasing child marriage rates, keeping girls out of school, restricting their career aspirations, and limiting health care and information on safe, consensual sex.

Entrenching these inequalities are climate disasters, COVID-19 and conflict, which are all upending lives around the world, obliterating livelihoods and making it more difficult for girls to afford or even physically reach school and health services.

This leaves tens of millions yet more vulnerable to child marriage and early pregnancy, adds UNFPA.

“When nearly a third of all women in developing countries are becoming mothers during adolescence, it is clear the world is failing adolescent girls,” said UNFPA Executive Director Dr. Natalia Kanem.

“The repeat pregnancies we see among adolescent mothers are a glaring signpost that they desperately need sexual and reproductive health information and services.”

Most births among girls under the age of 18 in 54 developing countries are reported as taking place within a marriage or union. Although more than half of those pregnancies were classified as “intended”, young girls’ ability to decide whether to have children can be severely constrained.

Indeed, the report finds that adolescent pregnancy is often – albeit not always – driven by a lack of meaningful choice, limited agency, and even force or coercion. See, for example: Daughters of a Lesser God: 800 Million Girls Forced to Be Mothers.

Even in contexts where adolescent motherhood is considered acceptable and planned for, it can carry “serious and long-term repercussions, especially when health-care systems fail to ensure accessible sexual and reproductive care and information for this vulnerable age group.”

Complications in pregnancy and childbirth are the leading cause of death among girls aged 15 to 19 years, who are also far more likely to suffer a litany of other violations of their human rights, from forced marriage and intimate partner violence to serious mental health impacts of bearing children before they are out of childhood themselves.

Girls who give birth in adolescence also often go on to have more than one baby in quick succession – which can be dangerous both physically and psychologically.

“Among those who first gave birth at age 14 or younger, nearly three quarters had a second baby before they turned 20, and a staggering 40% of those had a third before they left their teens.

Why is child motherhood so high?

Adolescent births now account for 16% of all births in the world, and the report shows women who began childbearing in adolescence had almost five births by the time they reached age 40, warns the report.

“With inequalities and humanitarian crises multiplying and intensifying, we know women and girls are bearing an unequal burden of the consequent physical, psychological and economic turmoil.”

Also according to the report, in conflict as in climate disasters, schools and health facilities are frequently reduced to rubble and devoid of staff and equipment.

Insecurity and violence render it impossible for people to move around even for basic necessities, including contraception and other critical sexual and reproductive health care.

“Crises and displacement are also known to lead to spikes in gender-based and sexual violence, in turn causing more sexually transmitted infections, unwanted pregnancies from rape, and rising rates of forced and child marriages as parents struggle to cope with financial hardship and aching hunger.”

Under these circumstances, access to employment, education and health services is disrupted or suspended entirely, pushing girls out of school, women out of the workforce and leading child marriages and unintended pregnancies to soar.

UNFPA’s State of World Population Report 2022: Seeing the Unseen highlights the alarming figure that almost half of all pregnancies in the world are unintended and explores the health, human right, humanitarian and socio-economic linkages of unintended pregnancies.

This is including the issue of gender-based violence, the increased barrier women face in accessing reproductive health services in conflict settings and the risks related to unsafe abortions.

In its report on World Population Day: “A world of 8 billion: Towards a resilient future for all – Harnessing opportunities and ensuring rights and choices for all,” for the first time in history, we are seeing extreme diversity in the mean age of countries and the fertility rates of populations.”

While the populations of a growing number of countries are ageing and about 60% of the world’s population live in countries with below-replacement fertility of 2.1 children per woman, other countries have huge youth populations and keep growing pace.

But focus should be on people, not population, highlights the United Nations Population Fund. Reducing people to numbers strips them of their humanity. Instead of making the numbers work for systems, make the systems work for the numbers by promoting the health and well-being of people.

Back to the key issue of women and teenagers, UNFPA’s report: Motherhood in Childhood: The Untold Story, features the trends and provides a wide picture of such a shocking problem.

Is this the world that human beings want?