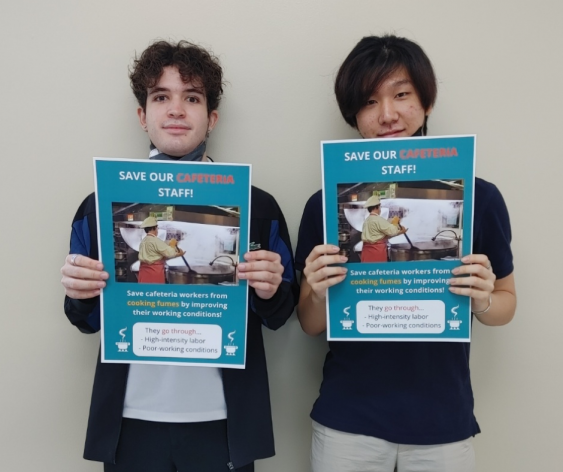 Seoul, Sep 28 2022 (IPS) - During my summer break this year, I read a news article about five school cafeteria workers who had died of lung cancer. Due to these incidents, a union of cafeteria workers, wearing their aprons and holding their lunch trays, held a protest in front of the President’s office on a scorching summer day. And it made us think about the devastating working conditions for the school lunch employees. Isn’t it so disheartening that we eat our school lunch at the expense of their health?

Did you know that one cafeteria staffer has to provide 150 student servings in a substandard kitchen with poor ventilation systems? That’s why they get lung cancer. While cooking, they inhale gasses, known as cooking fumes or cooking smoke. This substance contains “carbon monoxide, nitrogen dioxide, and several toxic volatile hydrocarbons,” which has caused 3.8 million people to die prematurely from this “indoor air pollution”. So installing a proper ventilation system in a school cafeteria is crucial to protect the kitchen staff. 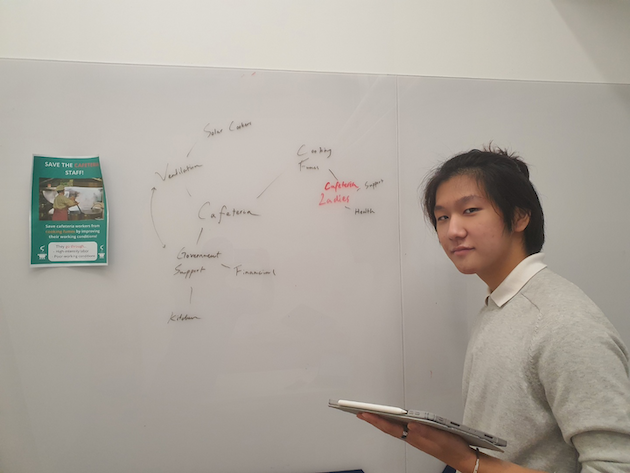 Soo Hyoun Lim holds a workshop on how youth could help the cafeteria staff in Seoul.

But why isn’t there a proper ventilation system in the first place?  Initially, South Korea did not have a school cafeteria. All school children brought their lunch boxes from home until 2011. Those who could not afford their lunch box received free lunch from school. But imagine it: Johnny is flashing out his fancy lunch box next to Jane, who is eating free lunch from school. What would Jane feel about this? Well, Korean politicians thought that no child should be left behind in terms of school lunches. So for the sake of equality, the Korean government launched a “Free School Lunch for All” program in 2011. The real problem was that they launched this free lunch program without installing a proper kitchen ventilation system to save on the budget. Basically, for the sake of political populism, they overlooked the serious problems a substandard kitchen environment would bring to the health of school cafeteria workers.

What about other countries that offer free school lunches? In Japan, for example, schools are built with a free school lunch program in mind from the beginning. So proper ventilation systems are built in. And they constantly renovate their school kitchens for the sake of the health of both cafeteria workers and students, which is a stark contrast to Korean schools. 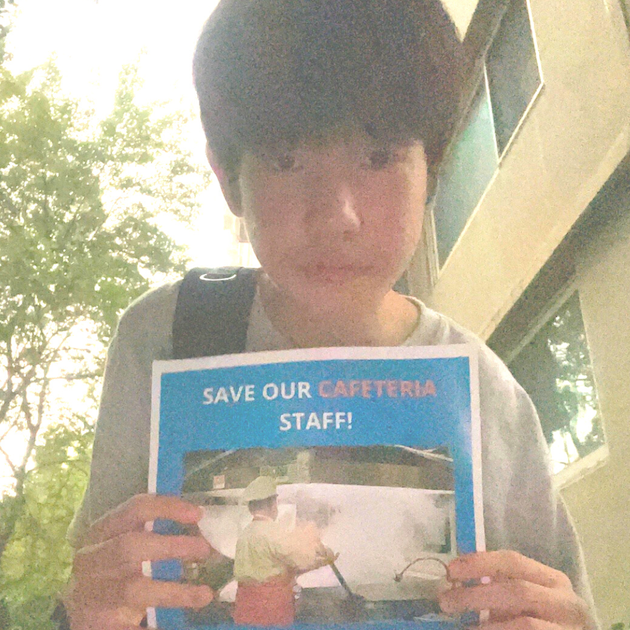 Is there anything I can do as a student?

I strongly believe that spreading the news of the devastating working environment for school cafeteria ladies using social media is a good place to start. So I made a poster and posted it on my Instagram. The result was phenomenal. We got lots of ‘Likes’ and comments from people thanking us for raising awareness of this dire situation in Korean school cafeterias. And we will continue to design new posters and post them on social media. People may wonder what difference a small media post can make. Confucius said, “The man who moves a mountain begins by carrying away small stones.” Our post may be a small stone. But wait until we have a huge collection of posts about this issue. We may move a mountain. You never know.

What else can we do as students? Well, we are writing this opinion editorial to suggest creative solutions which may reach the ears of the policymakers in South Korea. That’s something! For the answer, we thought of using clean and renewable energy: cook with the sun! Have you ever used a solar oven before? Basically, a solar cooker consists of a system of reflectors and a cooking pot. The setup converts the solar energy into heat energy to bake, boil, or steam food. In a solar oven, you can cook anything that you can cook in a conventional electric or gas oven or stove without producing toxic cooking fumes. Well, browning is unlikely in a solar oven due to lower temperatures. On the bright side, this means that we don’t need to worry about our food getting dried out or burned.

Most importantly, no deadly cooking fumes! We may not get crisp French fries or caramelized steaks, but there are huge collections of recipes designed specifically for solar ovens. If we can eliminate the harmful cooking smoke for our cafeteria ladies’ health, we will be happily satisfied with the solar cooker food. 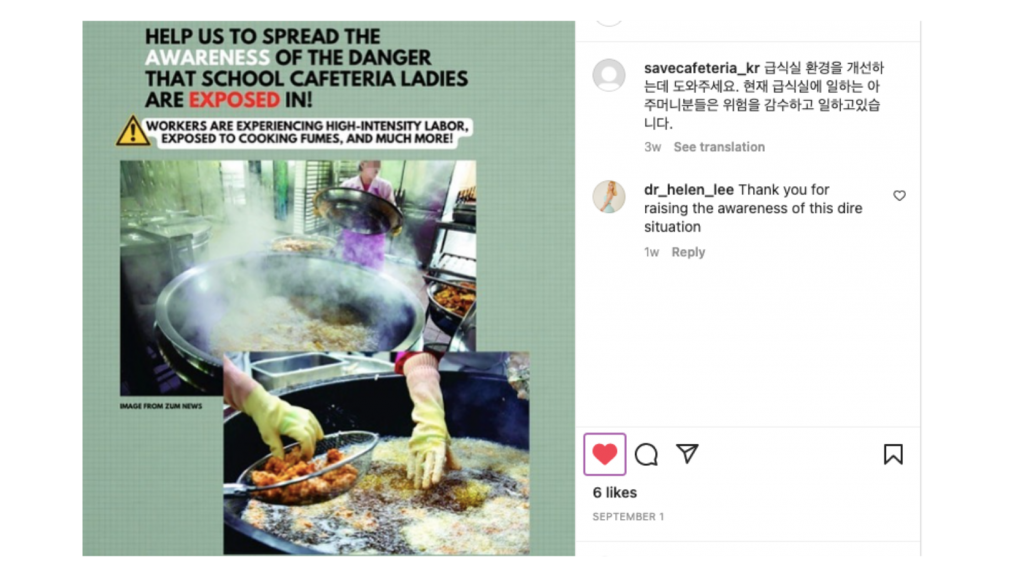 But will it work for a large crowd of people? According to Mason Terry, director of the Oregon Renewable Energy Center, multiple solar ovens were functioning superbly years ago at a refugee camp in Nepal. You may not know this, but Nepal is home to over 40,000 refugees. If it worked for such a large number of hungry people in Nepal, I’m sure that South Korea could find ways to utilize this earth-friendly oven for their students at school. Since the budget was the issue for installing proper ventilation systems in Korean schools, they can save a lot of gas and power bills by using solar ovens. And with that money saved, they can install proper ventilation systems! Again, we ardently hope that this sustainable solution reaches the ears of South Korean policymakers.

Posters on social media and talking about solar ovens. We know. They are small steps. Perhaps too small to change the current Korean cafeterias. Perhaps too weak to save the lives of our cafeteria ladies. But however small and weak these steps may be, the important thing is that we are leaving our footprints on this issue. Wayne Gerad Trotman once said, “We are not helpless. We all can make this world a better place. We can start with small steps, one day at a time.” So take a small step with us today. Tomorrow we will be a step closer to bringing changes to Korean school cafeterias.

Note: Soo Hyoun Lim was the team leader for this project.
Edited by Dr Hanna Yoon