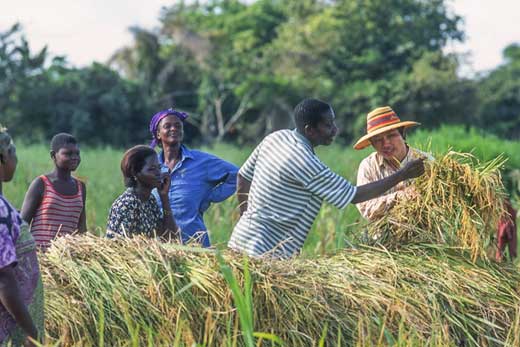 BANGKOK / BEIJING, Sep 12 2022 (IPS) - The world today faces a future that is in peril. Our challenges have become more complex and interconnected, as we see the impacts of the COVID-19 pandemic, an uneven economic recovery, a climate emergency, growing inequalities, and an increase in conflicts globally. This year also marks a grim milestone, with over 100 million people forcibly displaced.

These events accompany increasing division in the community of nations which threatens to push the achievement of the Sustainable Development Goals (SDGs) further out of reach for the Global South.

Adding to these crises, rising food and energy prices driven by the conflict in Ukraine, could push 71 million people into poverty, according to UNDP. The Global South, typically comprised of countries in South America, Africa, Asia, and Oceania, was already grappling with economic issues now exacerbated by the triple planetary crisis.

With limited resources, high vulnerability, and low resilience, people in the Global South will bear the brunt of our inaction, on climate and elsewhere. Solely depending on external aid from the Global North or G7 countries cannot be the panacea. Here, countries of the Global South can empower themselves and combine efforts to achieve sustainable development.

In the face of global threats, international cooperation remains vital, as highlighted by the International Day for South-South Cooperation. South-South cooperation seeks to complement traditional development models by throwing light on the transformations needed to deliver on priorities, including the SDGs. It offers possible solutions from Global South to Global South.

Countries of the Global South have contributed to more than half of global economic growth in recent times. Intra-South trade is higher than ever, accounting for over a quarter of world trade. It is time to further leverage these partnerships in the development space.

We already saw this while many countries were trying to obtain COVID-19 vaccines. Citizens of low and middle-income countries faced systemic discrimination in the global COVID-19 response, leaving millions without access to vaccines, tests, and treatments. India sent over 254.4 million vaccine supplies to nations across the world, under Vaccine Maitri – a vaccine export initiative.

Likewise, China has supplied over 200 million doses of vaccines to the COVAX Facility, in addition to providing millions of dollars in medical supplies to countries in the Global South, including in Africa, throughout the pandemic.

To advance development priorities, partnerships need to be rooted in shared interests that can lead to shared gains, as seen in traditional development models and assistance from the Global North. This dynamic needs to be at the core of the China-Africa relationship as well.

China, an economic powerhouse, has the potential to advance development in the Global South, especially in Africa, by bringing its experience, expertise, and resources to bear, and its assistance must advance both its interests and those of the countries where it operates.

Investments in shared goals are reflected in efforts by China to improve public health in Africa, including in the construction of the Africa Centers for Disease Control and Prevention in Ethiopia, and in clean energy, through projects such as the Kafue Lower Gorge Power Station in Zambia.

China promises to invest US$60 billion cumulatively in Africa by 2035, directed at agriculture, manufacturing, infrastructure, environmental protection, and the digital economy. This is most welcome, and those planned investments must answer the needs of the local economies and societies.

What works in one country may not work elsewhere, but true collaboration allows for learning from mistakes and sharing successes. This is where the UN’s expertise can ensure cooperation is demand-driven, in line with local expectations and needs, national development priorities, and relevant international norms and standards.

Platforms like the Forum on China-Africa Cooperation (FOCAC) can work to improve that essential partnership. This mechanism has identified shared priorities like climate change, agriculture/food systems, global health, and energy security, among others, between China and Africa.

For the first time in FOCAC’s history and with support from The Rockefeller Foundation, the UN in China is engaged as a strategic partner in this bilateral mechanism between China and Africa. The UN in China is continuing similar efforts in close consultation with relevant counterparts, including the China International Development Cooperation Agency.

For The Rockefeller Foundation, it is a nod to its legacy in China dating back to 1914, rooted in redesigning medical education to improve healthcare and its current priorities to advance Global South collaboration, especially in public health, food, and clean energy access—all global public goods.

Beyond the Global South: Action Together

With less than eight years to achieve the SDGs, truly international cooperation is our only hope. Emerging trends in technology and innovation can get us there, along with enhanced South-South cooperation efforts. But doing so requires us to “flip the orthodoxy”, as UN Deputy Secretary-General Amina J. Mohammed advised.

This can be seen in Kenya, where the Government and the UN System convened an SDG Partnership Platform with companies such as Philips, Huawei, Safaricom, GSK, and Merck. The outcomes include a downward trend of maternal and child mortality in some of the country’s most remote regions. Similar PPPs can hold promise in unlocking global progress on the SDGs.

Today, while we face a more volatile world, the spirit of South-South cooperation shows a core value that we need: solidarity. As UN Secretary-General António Guterres said, “The last two years have demonstrated a simple but brutal truth – if we leave anyone behind, we leave everyone behind”.

Deepali Khanna is Vice-President of the Asia Region Office at The Rockefeller Foundation. Siddharth Chatterjee is the United Nations Resident Coordinator in China.