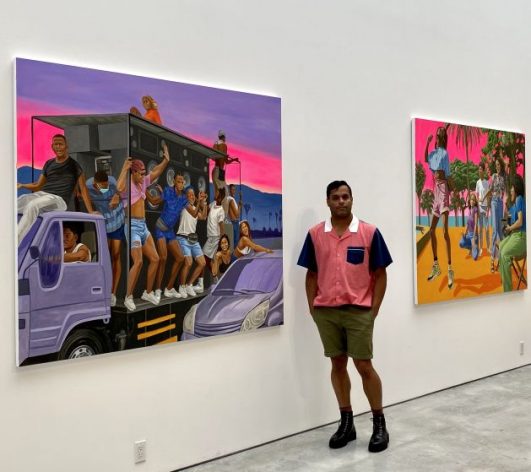 The exhibition, titled “Caribbean Summer”, pulled visitors in with its vivid colours and animated characters and also exemplified the success of alternative art events. The gallery space was provided by non-profit arts group Chashama, which describes itself as helping to “create a more diverse, equitable, and inclusive world by partnering with property owners to transform unused real estate”.

These spaces – including galleries that normally close their doors for the summer – are used for “artists, small businesses, and for free community-centric art classes”. According to Lugo, the organisation’s assistance made his show possible and has also provided motivation to continue producing work.

The 44-year-old artist said he’s particularly interested in portraying LGBTQ activists and in expanding his work to include more countries of the Caribbean. The following (edited) interview took place in Manhattan during the exhibition.

SWAN: How did the show come about?

DELVIN LUGO: So, this exhibition is a response to work that I was doing before. I had just finished a series that was about my childhood, growing up a young, gay man in the Dominican Republic, because I lived there until I was twelve years old. And I’d spent so much time kinda dealing with the past that it got to the point that I was like: you know what, I actually don’t know anything happening with the queer culture and the lives of people in DR right now. Yes, I do go back and visit, but when I go back, I go to see my relatives in the countryside, so this was a way to really educate myself and really connect with the queer community in the Dominican Republic. And in this case, it’s Santo Domingo that I’m focusing on.

SWAN: What steps did you take to make the connections?

DL: Well, I really started by reaching out to individuals on social media that maybe I’d seen stories written about, or things that caught my eye on Instagram… so, I reached out to them, and we kind of started a dialogue first. Then when I was ready to start painting, I decided to go meet them in person, and the theme that I had in mind was “chosen family”. I had a few ideas about what the situation was like there, but I really, really didn’t know.

It wasn’t until I started meeting people and they started telling me that basically they had no rights… and so I wanted to focus on artists and activists – people I really admired, people that are doing the work and doing the fight. That’s really how it started. I went there, I told my contacts to bring their chosen family, and we hung out and took pictures, and I came back here and that’s how the paintings were formed, from all the information that I had. And I usually don’t just work from one picture, I do a collage of many photos, and then I paint from that collage. 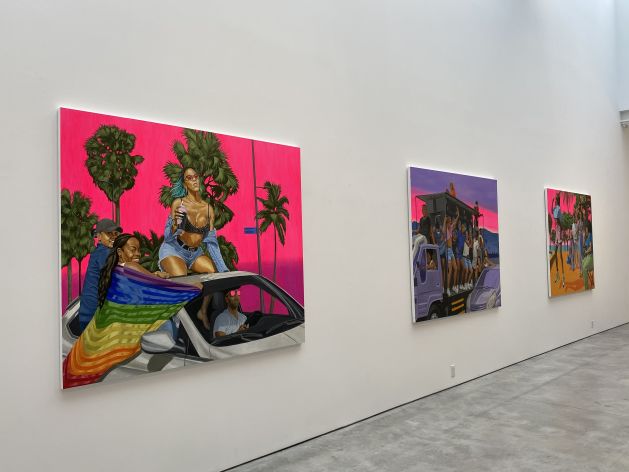 SWAN: So, there’s no painting that comes from just one photo?

DL: Well, in some cases, I borrowed pictures from an association that hosts Gay Pride marches, and I used the people pictured, but I added myself, or the car, or different aspects. With these images, I was inspired by the spirit – the spirit of celebration, the spirit of individuality… and I kind of just worked around the image, adding myself as the driver and so on.

SWAN: The paintings are super colourful, really striking – was that the intention from the start?

DL: I’ve been working with vibrant colours recently, and I knew that it was gonna be very bright… the Caribbean is bright, colourful, and also I wanted to make the paint symbolize the heat, the climate in DR as well. It also feels like summer with the hot pink. But I really do know most of these individuals. Except for some young people in one picture, I know everyone, like Agatha, a trans woman and gay activist from the Bahamas who lives in the Dominican Republic.

SWAN: Can you tell us about your own journey – have you always wanted to be an artist?

DL: I did, you know. It was one of those things that when I was done with school, I really needed to work to survive, so I took jobs and somehow I was always able to get jobs in fashion, and that really kept me busy for a long time. 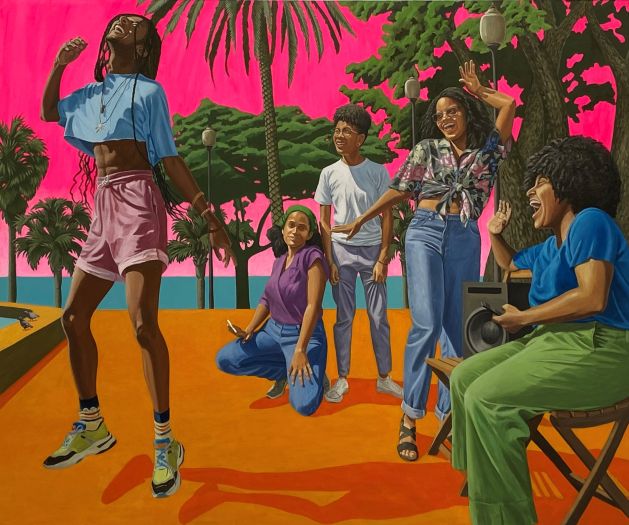 SWAN: What did you do in fashion?

DL: When I started, I did sales, like showroom wholesale, but most of the time I was working as a fashion stylist, being an assistant and then doing my own work. And that’s a fulltime job. Then slowly but surely, I started doing my own projects, like ink drawings, just things for myself, to be creative.

And that developed into my drawing more and playing with oils, which is something I had done before. To get back into it, I went to continuing education classes. I needed to be reintroduced to oils because I’d forgotten so many techniques and things that you need to know.

From then, I kept painting, praying for more time to work at it. Then Covid happened, I was let go from my job, and, in the beginning, I kept thinking that they might call me back any minute, and I truly worked around the clock on my painting for the first two months. The job didn’t call me back, but at that point it was great because by then I’d got used to an everyday practice. I can tell you that from the beginning of 2020 to even now, the way that I’ve seen my work grow and even the way that I think, and the way that I approach painting, it has been quite a learning experience.

SWAN: So, this is your first real solo show?

DL: Yeah, it really is. I’ve done a number of group shows, but this opportunity came with Chashama and I applied for it. I was already working on all these pieces, so this was the right time. It’s an introduction to my work, it’s not like a full solo show in a way.

SWAN: How long have you lived in New York?

SWAN: Where next, with the art?

DL: I want to continue painting, because it’s such a privilege to have a studio, to have a full-time practice, and I really do want to continue that. I’ve been painting from home up until October last year, and when I got my first studio – even though it’s the size of this table here – I couldn’t wait to get to the studio.

I was there to do my own thing. Still, I actually get annoyed when people tell me: “Oh, it must be so wonderful, you’re in your studio, doing your art…” It is great, but it’s also really frustrating because I’m hitting my head against the wall many a day, or leaving angry because something didn’t go right. It’s a fight.

So, for me, it’s truly just to continue creating, to continue painting, following my instincts, following the stories. I really want to continue in the same path of representing and bringing a focus to the LGBTQ community, not just in DR, but in any other parts of the world. I think it would be an interesting project actually to go elsewhere to meet the queer culture and showing them in the painting, even like in other places in the Caribbean, like Puerto Rico, Cuba, Jamaica. That would be really interesting. – AM / SWAN