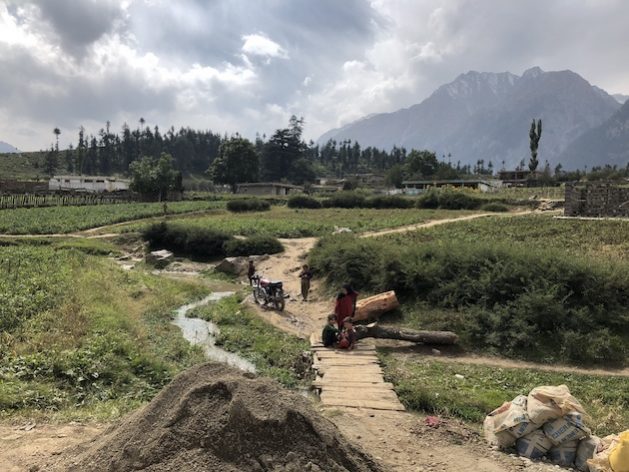 Karachi, Oct 26 2022 (IPS) - The rise in militancy in Swat still haunts many locals with flashbacks of what they went through 15 years ago.

Dr Jamila Khan can recall every last detail of the day she and her family were forced to leave their hometown of Matta, in Khyber Pakhtunkhwa’s (KP) idyllic Swat valley, along with thousands, days before the Pakistan army launched an offensive, Operation Rah-e-Rast, against the militants of Tehrik-i-Taliban Pakistan (TTP) after the failed peace agreement with the latter, in 2009.

It was not just the “excruciating” pain running with her braces (Khan is a polio survivor) but the mayhem that afternoon that she recalls.

“We ran with nothing but the clothes on our back,” and went to Madyan, a town an hour’s drive from Matta, and stayed for three months with their uncle. She was among the nearly three million people, many of whom fled Swat for several years.

She can still recall the indignity faced by “the women, the children and the elderly – some of whom were being carried on the shoulders of their sons” after they ran for their lives amidst the sound of deafening “bombing”.

“The militants forced the burqa (an enveloping outer garment worn by women which fully covers the body and the face) upon us, but that afternoon I saw women running for their lives without covering themselves with the chadar (traditional Pashtun cloth that envelops the body from head to foot),” Khan said.

“I never want to go through that again,” she said resolutely. “We will not let anyone bring us to the brink, and this time, we will not be deceived.”

The images of dead bodies on streets are as fresh as the hushed tones that echo in her ears of elders talking of young girls from her family being kidnapped, raped, and even forced into marriage to militant commanders and of defiant men who were punished in the most barbaric manner including being beheaded and slaughtered. The victims were then put on public display. “I was old enough to remember many things,” she said.

“I don’t think I have healed and come out of the horror of all that I witnessed,” said Khan. “Neither has anyone else; we just don’t talk about it and have bottled it all up.”

In 2002 a firebrand cleric from Swat, Mullah Fazlullah, set up his headquarters at his village in Imam Dehri.

Between 2004 and 2007, he started wooing the locals, especially the women, through several dozen illegal FM radio stations promising the Nizam-e-Adal (Islamic justice system), not just in Swat but the entire Malakand division, of the KP province, comprising the districts of Bajaur, Buner, Chitral, Dir and Shangla. By 2007, the TTP had established its writ in the valley, just 160 km from the country’s capital, Islamabad, while the 20,000 army troops deployed looked on helplessly. The Taliban spokesperson Muslim Khan had told IPS in a 2009 interview: “We want to give women their rightful place in Islam”.

“People say it was the women of Swat who supported Fazlullah by giving large donations, even their jewellery, but no one asks why,” said Musarrat Ahmad Zeb, a Pakistani politician from Swat, who had been a member of the National Assembly of Pakistan, from June 2013 to May 2018.

Talking to IPS from Swat, she said the TTP promised quick justice to the locals, which they had enjoyed when the wali ruled Swat and had eroded after the princely state acceded to Pakistan in 1969. Zeb is the widowed wife of Miangul Ahmed Zeb, son of the wali of Swat, Miangul Jahan Zeb.

But instead of giving the women what the TTP promised, they took away their right to life altogether. They were forced to give up jobs where there was interaction with men, they were forbidden from walking to the market unescorted and adolescent girls were not allowed to go to school.

Twenty-one-year-old Gulalai Noor is worried she may have to close down her beauty parlour in Mingora, the capital city of Swat.

“We had a fairly good clientele, but since the last two months, it’s a trickle. If this continues, how will we be able to pay the rent and utility bills of the place?” she told IPS over the phone. She not only supports her parents but also pays for her tuition. Noor is enrolled in the two-year diploma course for a lady health visitor programme.

Senator Mushahid Hussain Sayed, the chairperson of the Senate Committee on Defence and National Security, told IPS the “resurgence of terrorism” in KP was of “serious concern”, recalling the sacrifices made by Pakistan’s armed forces and the people to combat and contain the “scourge”.

But the arrival of the Taliban is not new and not in Swat alone. “They have been there for many years and are everywhere in KP. I have been bringing it to the notice of colleagues in the assembly since 2018,” Mohsin Dawar, a legislator, from North Waziristan, and chairperson of the National Democratic Movement, a nationalist party.

He told IPS the militants got energized after the Taliban took over Kabul last year.

According to a recent research paper produced by the Islamabad-based think tank, Pak Institute of Peace Studies, as many as 433 people were killed and 719 injured in 250 attacks in Pakistan between August 15, 2021.

Terming them “isolated incidents of terrorism”, the officials claimed all did not take place in KP. However, the TTP has claimed responsibility for a majority of these attacks.

Last month eight six persons, including a former peace committee head Idrees Khan, were killed by a remote-controlled bomb attack. Khan was at the forefront of mobilizing resistance against the Taliban in 2007. Earlier this month, a minister of Gilgit Baltistan was taken hostage; in return, they demanded the release of their comrades involved in the deadly 2013 terrorist attack on the Nanga Parbat base camp, in which foreign climbers were targeted. They also wanted an end to women’s sports activities in GB. “These high-profile cases create fear among the general public and are very demoralizing for them,” Dawar had said in the assembly recently.

While it was the “people’s resistance” that had “contained” the situation, he warned it can get out of hand and become “even more dangerous than last time” if not taken notice of now.

Fazal Maula Zahid, a member of the Swat Qaumi Jirga (a platform of elders and notables working for peace in the region), has high hopes for the youth and women of the valley. “If they come out as a collective force and are organized,” he said, no harm can come to the valley.

“Today’s youth are energetic and have seen or heard the troubles of their elders; they will not allow history to repeat itself,” Zahid said, adding the people had no faith in government functionaries who have done little to protect the hapless people.

For a few weeks now, residents from different towns and cities of KP, like Khawazakhela, Kabal, Matta, Mingora, Charbagh and Madyan, have been coming out to protest against the surge in terrorist attacks.

“At Mingora, there were more than 80,000 at Nishtar Chowk; it was huge,” said Zahid, who attended the event. “I am told the one at Charbagh was even bigger!”

“It is heartening that people have risen against this resurgence and showed their resolve to never again allow this phenomenon to pollute their society,” said Sayed and the “gains of the recent past are not frittered away”.

He informed that at a committee meeting held earlier this month, it was resolved to “revitalise the counterterrorism apparatus”, especially the National Counter Terrorism Authority, (responsible for making counter-terrorism and counter-extremism policies and strategies). He hoped, there “won’t be a yawning chasm between words and deeds” and the interests of the people and the state will remain paramount, not “political expediency”.

But these were only men, as the custom of segregation in public spaces is still prevalent.

However, said Zahid, in an unprecedented move, on October 21, a handful of women also protested in Madyan.

Both Noor and Khan said they, too, want to come out.

“I think if there are enough women, my family will give permission,” said Khan.

Note: Names of the women interviewed have been changed to protect their safety.