KARACHI, Aug 30 2022 (IPS) - The heavy and incessant monsoon downpours across Pakistan in the last two months have triggered floods wreaking havoc across the country, submerging entire villages and vast tracts of land and entrapping people. Anything coming in the way of the relentless water is being destroyed, including roads, bridges, and standing crops.

The Pakistani government has declared a national emergency with more than 30 million without shelter. According to the UN Office for the Coordination of Humanitarian Affairs (OCHA), 66 districts have officially been declared ‘calamity hit’ by the government of Pakistan – 31 in Balochistan, 23 in Sindh, nine in Khyber Pakhtunkhwa (KP), and three in Punjab. Many have likened the destruction to the 2010 super floods. 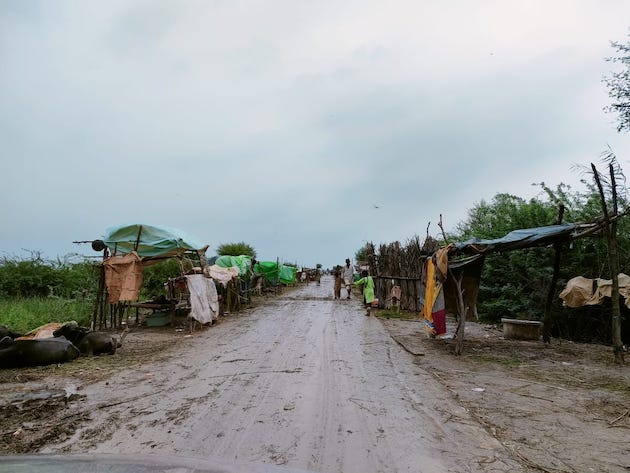 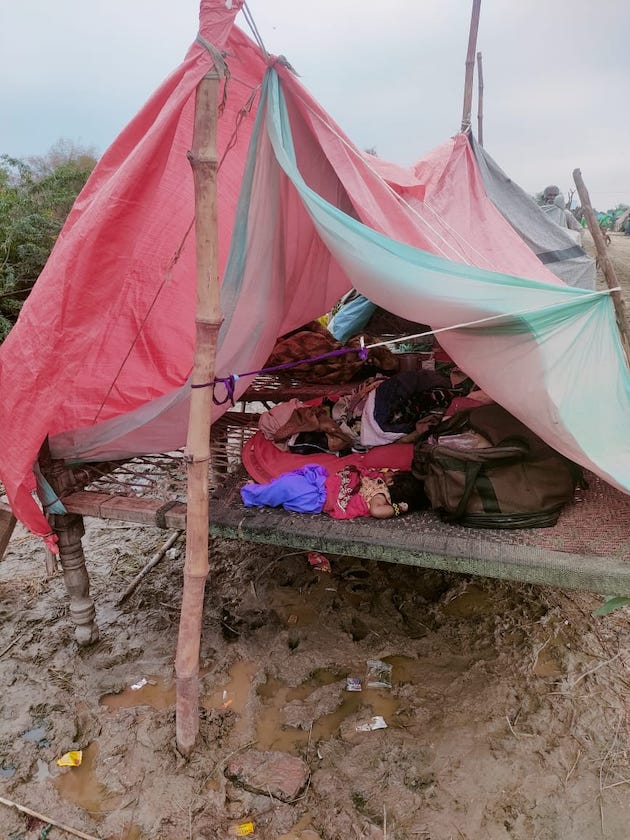 Saeeda Khatoon, 28, likened her village of Zakaria Mahesar to the famous 3rd millennium BC Moenjodaro ruins of the ancient Indus civilization, in her district of Larkana, in Sindh province, after the rains destroyed over 200 houses, some made of mud and straw and others, like hers, of brick. She, along with 11 members of her family, has found temporary shelter on higher ground, on the outskirts of the village, under the open sky, unprotected from the vagaries of the unpredictable monsoon rains.

“The water gushed into our home suddenly, and we rushed out just moments before the roof caved in,” she said, rendering them homeless. With water still waist deep, she said there was no way of retrieving their belongings from under the debris.

The monsoon season hit Pakistan this year in June, earlier than usual. Torrential rains continued well into July, with 181% above average rainfall. The Pakistan Meteorological Department (PMD) said it rained 177.5mm against its normal of 63.1mm, making this July the wettest since 1961.

“July 2022 rainfall was excessively above average over Balochistan (+450%) and Sindh (+307%), both rank as the wettest ever during past 62 years,” said the PMD’s monthly summary. And the rains continue to batter the country well into the end of August, spreading more destruction across the provinces of Punjab, KP, and the mountainous region of Gilgit-Baltistan, after annihilating Balochistan and Sindh.

According to the National Disaster Management Authority, the rains have caused havoc across Pakistan, claiming nearly 1,000 lives and more than 1400 rain-related injuries since June. More than half the casualties are from Balochistan and Sindh province.

Over 3,000 km of road network has been damaged, of which over 2,300 km is in Sindh, making it difficult for the government and non-governmental organizations to reach and rescue. “The whole province is inundated with flood water, and roads are battered; it is difficult to reach and provide relief,” said Inayatullah Ismail, senior manager, coordination at the non-profit Al Khidmat Welfare Society. “We are providing tents to the displaced people and will be setting up kitchens on the highways where people are seeking refuge.”

“Since the last three days, our teams have been distributing cooked food to nearly 30,000 flood victims who have set up makeshift camps around RDF offices,” said Soomro.

“Giving cooked meals is best as it is difficult for the displaced to cook having lost everything,” said Aqsa Iqbal, who volunteers with Serve Humanity Together. She suggested: “All those who are providing cooked food to affectees may also want to add drinking water bottles, packed snacks or biscuits, juices and fruits (dates) as well, so that they could have something that does not get spoiled, and they can consume over the next few days.” She also said most people urgently needed tents, plastic sheets, and medical aid.

Further, she said, rescue and relief workers were finding it difficult to reach people stuck in remote villages, surrounded by stagnant rainwater.

“Many of these people are young volunteers with a lot of zeal but not professionally trained. Wading through water, even shallow, was difficult, and there is always the fear that they could be bitten by snakes or fall in open potholes,” said Iqbal. That is why, she said, it would be best to bring the flood affectees to dry land, where it is easier to provide them with food, water, and medicines. 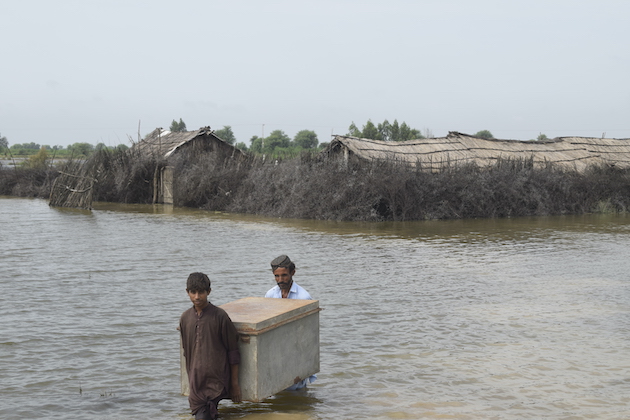 “I have never seen a greater catastrophe in my life,” said Sindh chief minister Murad Ali Shah after visiting various flood-affected districts of Sindh. He said his government was stretched for funds and had run out of tents and food. Over 10 million people in Sindh have been rendered homeless.

The government of Sindh has formally reached out to NGOs requesting help with rescue and relief work. 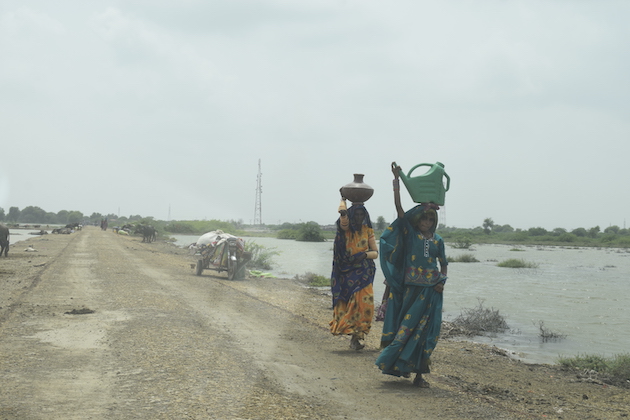 Despite being surrounded by water, the women from the Taluka Jhudo region have to walk for miles to access clean water for their families and cooking. Credit: Research and Development Foundation (RDF)

Rani Malukhani, a social activist from Khuda Baksh Marri, a village in Sanghar district, said they were starving and sitting on the roadside with nothing to protect them from the lashing rain. “Where is the government; where are the NGOs?” she said over a WhatsApp video phone call, showing how her community was sitting stranded on the roadside.

“Our homes and standing crops have been destroyed,” she cried in distress.

“There are close to 700 people in this village, and all are sitting on both sides of the 2-3 km long road under the sky,” confirmed Azra Gandehi, who works with the NGO, Research and Development Foundation (RDF). She was visiting the village for a preliminary survey and assessment of the damage so she could return with assistance. “The water is chest deep, and all had to evacuate along with their livestock.”

In the neighbouring Mirpur Khas district, things are no better. Motan Bheel, 52, and her five children and two goats, belonging to Jhudo village, had to wade through waist-deep water to reach the safety of the bank of Puraan (a sub-drain that collects saline water, agricultural effluent, and floodwater to the Arabian Sea). “There is water all around us, but not a drop to drink,” she said. “We have not received any help from the government, NGOs or philanthropists.”

Irfan Hussain, working with RDF and helping the district government in Mirpur Khas with rescue work, explained: “They have to walk nearly three kilometres to fetch water, but because they don’t have enough vessels to carry water and big containers to store, they have to keep going back and forth.”

Bheel said her 14-year-old was running a high fever for the last two days and fears it may be malaria. “There is nowhere to go to seek help, and I don’t have the money,” she said.

Hussain said she and half the villagers (from 250 households) staying on either side of the bank urgently need tents, mosquito nets and healthcare to fight malaria, diarrhoea, and scabies.

The government has turned schools and factories into relief camps, but Gandehi, who visited some, found them “too crowded”. 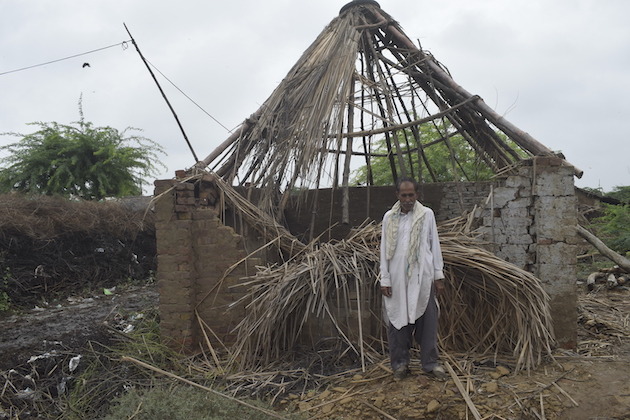 Contemplating his losses, a man stands in front of his house in Taluka Sanghar, District Sangha. He is among the millions displaced by the floods. Credit: Research and Development Foundation (RDF)

The Larkana district administration has set up around 290 camps where around 28,500 people have been shifted. But people are unhappy with the lack of facilities saying they spend sleepless nights “owing to the huge swarm of mosquitos”. The government has registered nearly 184,061 people in camps set up in 117 districts across the country.

The RDF is also helping the livestock department vaccinate animals to reduce the threat of an outbreak of diseases.

Over 17,600 animals were vaccinated and 8,000 dewormed in the last two days in Tando Allahyar, Matiari, Mipur Khas, Thatta and Tharparkar districts during the floods,” said Ashfaque Soomro, executive director of RDF. “The campaign will continue, and we will increase our outreach in ten other districts.”

The government has launched an international appeal for relief and rehabilitation. The European Union announced €350,000 as crucial humanitarian assistance focusing on addressing the urgent needs of the hardest-hit districts of Jhal Magsi and Lasbela in Balochistan.

Prime Minister Sheh­baz Sharif also appealed to the nation for Rs 80 billion needed for carrying out relief work in addition to “hundreds of billions of rupees” to rehabilitate the victims.