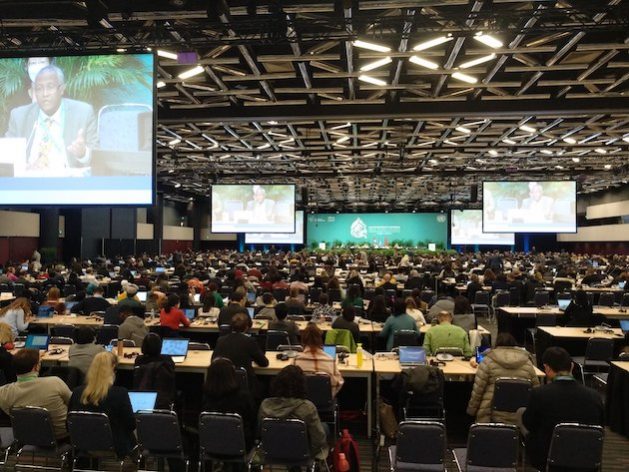 Montreal, Dec 20 2022 (IPS) - In a landmark agreement, all parties of the United Nations Convention on Biological Diversity (UNCBD) adopted the draft Global Biodiversity Framework (GBF) to protect at least 30% of the world’s lands and water by 2030.

Led by China and facilitated by the CBD, the parties of the convention adopted the draft very late on Sunday night, after 12 days of intense negotiations over 23 targets that, put together, make the framework for biodiversity protection until 2030.

The Old vs. New GBF

When COP15 negotiations began on December 7, the GBF had 22 targets. However, on December 19, the final day of the COP, there were 23 targets in the adopted document. There have not been any new additions, but Target 19 – focused on finance – has been divided into two targets: Target 19 and Target 20. Target 20, therefore, is now Target 21, Target 21 is Target 22, and Target 22 is now Target 23.

The adopted document looks leaner and shorter compared to the version presented before the parties on December 7. However, the new version – presented by China on Saturday and adopted later by all parties – has all the text considered crucial.

For example, on Target 3 – widely considered as the lifeline of the GBF and equivalent to the Climate Change COP’s goal of keeping global warming to 1.5 degrees – the old text was long and somewhat vague, with too many details but no indication of action.

In Target 19.1, focusing on resource mobilization, the draft framework proposed to increase financial resources progressively and annually from all sources by reaching at least $200 billion by 2030.

In Target 22, the draft version read: “Ensure women and girls equitable access and benefits from conservation and sustainable use of biodiversity, as well as their informed and effective participation at all levels of policy and decision making related to biodiversity.”

The adopted version of this target has a language that is richer and more action-oriented:  “Ensure gender equality in the implementation of the framework through a gender-responsive approach where all women and girls have equal opportunity and capacity to contribute to the three objectives of the Convention, including by recognizing their equal rights and access to land and natural resources and their full, equitable, meaningful and informed participation and leadership at all levels of action, engagement, policy, and decision-making related to biodiversity.”

In addition to the GBF, the parties at COP15 have approved a series of related agreements on the framework’s implementation, including planning, monitoring, reporting, and review; resource mobilization; helping nations to build their capacity to meet the obligations; and digital sequence information on genetic resources. 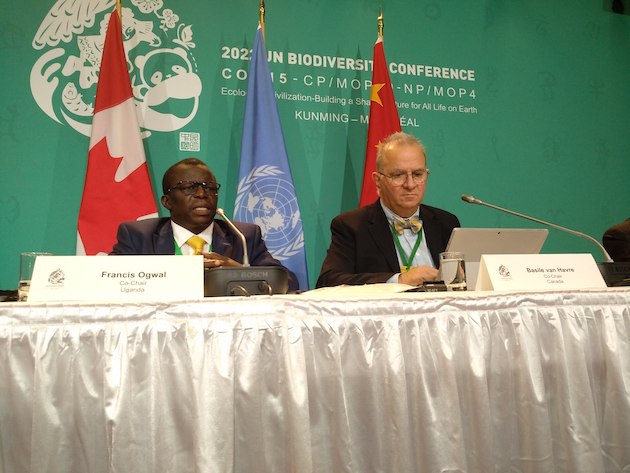 Francis Ogwal and Basile Van Havre, co-chairs of the Global Biodiversity Framework, at a press meeting after the framework was adopted. Credit: Stella Paul/IPS

COP15 delegates agreed to establish a multilateral fund for the equal sharing of benefits between providers and users of DSI within the GBF.

Another big decision was to create a specific fund for biodiversity within the Global Environmental Facility (GEF) – the nodal agency that receives, channelizes and distributes all funds for environmental protection in the world. Reacting to the decision, Carlos Manuel Rodriguez, GEF CEO and Chairperson, called GBF a significant breakthrough and supported the creation of the fund.”

“Resource mobilization has been a central theme here in Montreal over the last two weeks, both to reach an ambitious agreement, and to ensure it is implemented. I am therefore honored and extremely pleased that the Conference of the Parties has requested the GEF to establish a Global Biodiversity Fund as soon as possible, to complement existing support and scale up financing to ensure the timely implementation of the post-2020 global biodiversity framework,” Rodriguez said in a press statement.

Jennifer Corpuz of Indigenous People’s Forum for Biodiversity (IPFB), an umbrella of over 10 thousand indigenous organizations across the world, had been lobbying intensely to ensure mainstreaming of indigenous peoples’ rights in the GBF, called the adopted document, a “good compromise” and “a good start.”

According to Corpuz, the GBF – now known as “The Kunming-Montreal Global Biodiversity Framework,” contains strong language on all targets that concern indigenous peoples and local communities. The language is very strong, especially in the areas of spatial planning (Target 1), area-based conservation (Target 3), customary sustainable use (Targets 5 and 9), traditional knowledge (Goal C, Targets 13 and 21), and participation and respect for the rights of Indigenous peoples and local communities to lands, territories, and resources (Target 22).

Basile Van Havre – the co-chair of the framework, appeared to agree with Corpuz. Answering a question on the implications and meaning of various terms such as “equitable governance” in the GBF, Havre told IPS, “it would help local governments to create a mechanism for working together with different sections of the populations, especially the Indigenous peoples.”

On the adoption of a gender target (Target 23) and the adoption of the Gender Action Plan, the CBD Women’s Caucus expressed their gratitude to various parties for their support. A group of women also broke out in a jubilant dance – an expression of their joy and relief after years of persuasion to include Gender as a stand-alone target in the GBF.

The next steps and challenges ahead

According to experts, the success of the GBF will heavily lie on two factors: 1) Adopting and operationalizing GBF indicators relevant to each target and 2) Creating a mechanism quickly for those decisions that involve a multilateral system.

For example, under the new GBF, finances for biodiversity will come from rich and developed nations and private investors. But the pathways and mechanisms for these are yet to be decided, and the sooner these are done, the better it will be for all parties to begin implementing the framework.

A lot will also depend on how quickly the countries can revise their current National Biodiversity Action Plans to make ways for implanting new decisions under the GBF, according to Francis Ogwal, CBD co-chair of the GBF.

Others have also cautioned that if countries are not able to make necessary policy changes, there is a risk that the GBF could fail.

“The agreement represents a major milestone for the conservation of our natural world, and biodiversity has never been so high on the political and business agenda, but it can be undermined by slow implementation and failure to mobilize the promised resources. Governments have chosen the right side of history in Montreal, but history will judge all of us if we don’t deliver on the promise made today,” warned Marco Lambertini, Director General of WWF International.

The agreement also obligates countries to monitor and report on a large set of “headlines” and other indicators related to progress against the GBF’s goals and targets every five years or less. Headline indicators include the percent of land and seas effectively conserved, the number of companies disclosing their impacts and dependencies on biodiversity, and many others.

The CBD will combine national information submitted by late February 2026 and late June 2029 into global trends and progress reports.