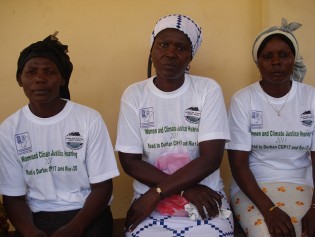 By Monde Kingsley Nfor
As climate change interest groups raise their voices across Africa to call for action at the COP20 climate meeting in December and the crucial COP21 in Paris in 2015, many worry that the continent may never have fair representation at the talks.

By Monde Kingsley Nfor
In Cameroon's Northwest Region, Judith Muma walks 9km from her home to her 300-square-metre farm. The vegetables she grows here are flourishing thanks to the money she has borrowed from her njangi (thrift group) and a local credit union to finance a small artisanal irrigation scheme.

By Monde Kingsley Nfor
For the last 13 years, Michael Ndah, 37, has worked for three road construction companies in Cameroon, but it is only in the last two years that his current employer has managed to register him with the National Social Insurance Fund (CNPS).

By Monde Kingsley Nfor
Pierre Zambo is a hotel manager in Kribi, a sea resort town in Cameroon’s South Region. In the past his hotel would have “more than 100 tourists each week. But today if I manage to have 50 people registered into my hotel weekly, then it's good business.”

By Monde Kingsley Nfor
The growing number of child deaths from diarrhoea in Cameroon has necessitated the introduction of a new vaccine (RotaTeq) designed to protect babies under five against common types of rotaviruses that cause diarrhoea. But growing skepticism over new vaccines, and lack of potable water and proper hygiene could thwart such public health efforts, experts say.

By Monde Kingsley Nfor
Ismaela Muhamadu was six years old when he lost his parents and siblings in a poisonous gas explosion at northern Cameroon’s Lake Nyos. The blast killed more than 1,800 people, and 3,000 cattle and wildlife over a 25-km radius.

By Monde Kingsley Nfor
Bordered by a rubber plantation in the west, a forestry plantation in the east and a palm oil farm in the south, the 18 local communities that live in Ocean Division, southern Cameroon, have had an uphill struggle for the rights to their land.

Protests against a controversial palm oil plantation in the Korup National Park, Africa’s oldest and richest rainforest in terms of floral and faunal diversity, in Mundemba, southwest Cameroon will continue despite the arrests and intimidation of local environmental campaigners.

By Monde Kingsley Nfor
In the small farming village of Sabongari, in Cameroon’s North West Region, the need for kerosene to light bush lamps and petrol to run electric generators has been replaced by the need for something much cheaper and cleaner: sunshine.