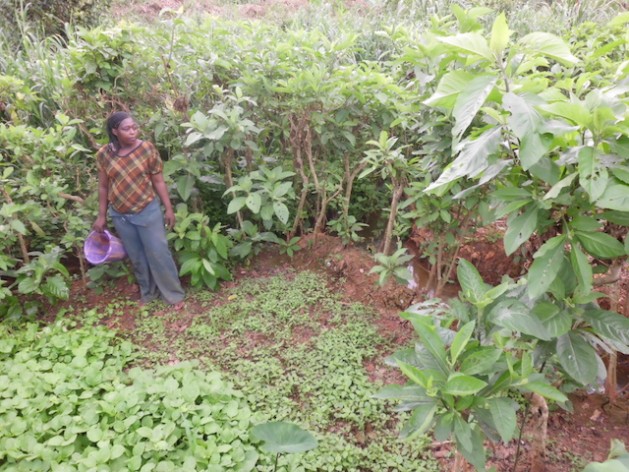 YAOUNDE, Aug 14 2014 (IPS) - In Cameroon’s Northwest Region, Judith Muma walks 9km from her home to her 300-square-metre farm. The vegetables she grows here are flourishing thanks to the money she has borrowed from her njangi (thrift group) and a local credit union to finance a small artisanal irrigation scheme.

“I spend more money today buying farm implements such as water tanks, watering pumps, fertilisers, insecticides and improved seeds. I think we must spend in farming today if we want to adapt to climate change,” Muma tells IPS.

Cameroon’s economy is primarily agrarian and about 70 percent of this Central African nation’s 21.7 million people are involved in farming. Changes in temperature and precipitation pose a serious threat to the nation’s economy where agriculture contributes about 45 percent to the annual GDP.

In the northern parts of Cameroon, the semi-arid lowlands and hills are mostly dependent on rainfall and groundwater. The impact of forest clearance on hydrological processes has also aggravated climate change impact in these areas.

“If most of the projects on climate change adaptation ... could reach us, the farmers, directly, important farm implements the cost of farming could reduce.” Judith Muma, smallholder farmer, Cameroon

Muma explains that even small-scale subsistence farmers like her now need to invest money in their livelihoods to ensure a minimal output. She says as a result of her investment, most of her harvest — 60 percent — is sold at a local vegetable market.

“This drop in concern for agriculture had a considerable influence on Africa’s capacity to develop climate adaptation policies and early warnings [systems]. But after two decades of decline, investments in agriculture are now on the rise,” Collotte Eboko, an agriculture inspector in Ministry of Agriculture and Rural Development, tells IPS.

“Sub-regional initiatives have generated a multiplicity of commitments to addressing climate change, poverty and hunger with a new focus on climate friendly agriculture,” Eboko says.

According to a United Nations’ Intergovernmental Panel on Climate Change (IPCC) report, Africa faces “very high” risks to crop production as a result of global warming.

Last year’s Adaptation Gap study published by the U.N. Environment Programme (UNEP) warned that Africa could face an annual adaptation bill of 35 to 50 billion dollars by 2050.

But Africa lags behind as far as adaptation projects to support vulnerable groups are concerned.

“African governments have not done enough for the developed world to see adaption as priority for the continent. They still think climate change is a white people’s [western] problem…

“The position of Africa is grounded on these assumptions. But if we started by showing more commitments, our claims shall be more rational,” Samuel Nguiffo, of the Centre for Environmental Development, a research organisation in Cameroon, tells IPS.

Investment in climate change adaptation can help ensure that the impacts of climate change — including a projected 20 to 50 percent decline in water availability — do not reverse decades of development progress in Africa, according to the UNEP.

As the international community prepares for the Conference of the Parties to the United Nations Framework Convention on Climate Change in Paris 2015, Africa still has much at stake in this global discuss. But the issues are many and complex due to the continent’s high level of vulnerability to climate change and its low level of resources.

But Nguiffo says that Africa should not wait for a developed nation to finance a policy formulation project.

“The will and commitments should rather come from our own parliaments and decision makers first. Africa needs an effective climate change adaptation policy that considers climate change as survival issue.

“Integrating a gender approach is vital to promoting a quick response to climate action both at international and national level,” Nguiffo says.

Many African countries are lagging behind as far as adaptation projects are concerned. The Climate Funds Update (CFU) website highlights a large gap between funding approved and funding spent on projects in Africa.

For this reason, Africans have missed out on important funding opportunity for their projects. For example, under the U.N.’s Clean Development Mechanism (CDM), only two percent of the over 7,000 projects are based on the continent.

The failure of the CDM of the Kyoto Protocol to support projects in Africa has been a major concern for African climate experts.

This lag has been blamed on Africa’s low capacity to develop and invest in mitigation as well as climate-resilient agriculture.

“Africa is in dire need of capacity building of national institutions responsible for mitigation and adaptation to facilitate and increase Africa participation in CDMs and REDD,” Timothee Kagonbe, one of Cameroon’s envoys to the climate change negotiations, tells IPS.

There are serious bottlenecks in programme implementation in Africa. In Cameroon, for example, there were over 30 CDM projects registered by Cameroon’s Ministry of Environment, but only one has been implemented and is qualified as a CDM project.

In 2010, the Japanese government supported 20 African countries with 92.1 million dollars over three years to implement integrated and comprehensive adaptation actions and resilience plans.

According to Daniel Seba of the Ministry of Environment, “the Japanese Africa Adaptation Programme helped Cameroon develop climate-resilient policies and development processes to incorporate climate change risks/opportunities in priority sectors but we need funding for its implementation.”

But Kagonbe explains that weak governance and limited capacity has resulted in failures in climate change adaptation and mitigation projects. The various international procedures for the formulation and implementation of mitigation and adaptation projects are very complicated for African countries, which have very little capacity and funding.

The African Development Bank has recently opened the Africa Climate Change Fund. This is aimed at ensuring countries on the continent get more help adapting to the effects of global warming. The fund received six million dollars from Germany in April.

“Climate change is a great opportunity for economic growth given increasing climate funding pledges and if more investment is made in agriculture it will becomes more sustainable, increasing its productivity and becomes more resilient against the impact of climate change,”  Eboko says.

Africa needs to rethink many of its basic economic assumptions and investment strategies and start spreading investment in rural and deserted regions to reduce climate induce security risk and migration, she adds.

“If most of the projects on climate change adaptation we hear about on the radio and read in publications could reach us, the farmers, directly, important farm implements the cost of farming could reduce,” Muma says.