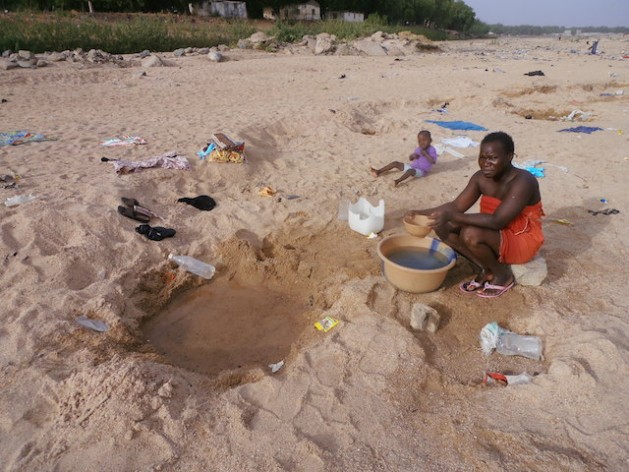 Lara Adama digs for water in a dried up river bed in Dumai, in Cameroon’s far north. There has been a nine-month drought in the region and recurrent cholera outbreaks. Credit: Monde Kingsley Nfor/IPS

DUMAI/YAOUDE, Cameroon, Aug 19 2014 (IPS) - Under a scorching sun, with temperatures soaring to over 40 degrees Celsius, Lara Adama’s family is forced to dig for water from a dried-out river bed in Dumai, in northern Cameroon.

This is one of the rivers that used to flow into the shrinking Lake Chad but there is not much water here.

There has been a nine-month-long drought in the region and Adama tells IPS that her family “digs out the sand on this river bed to tap water.”

“We depend on this water for everything in the house,” Adama, a villager in Mokolo in Cameroon’s Far North Region, says.

A cholera outbreak has been declared in Adama’s village. But she and other community members have no choice but to get their water from this river.

The lone borehole in this village of about 1,500 people is out of use due to technical problems.

“Every family comes here to retrieve drinking water. Our animals too depend on this water source to survive. When we come after the animals have already polluted a hole, we simply dig another to avoid any health problems,” she says.

This region is threatened by extreme water shortages and climate variability. Barren soils constitute some 25 to 30 percent of the surface area of this region. Lake Chad is rapidly shrinking while Lake Fianga dried up completely in December 1984.

Gregor Binkert, World Bank country director for Cameroon, tells IPS that a water-related crisis is prevalent in the north and there is an increased need for protection from floods and drought, which are affecting people more regularly.

“Northern Cameroon is characterised by high poverty levels, and it is also highly vulnerable to natural disasters and climate shocks, including frequent droughts and floods,” Binkert explains.

The protracted droughts in Far North Region have triggered a sharp increase in cholera cases. The outbreak is mainly concentrated in the Mayo-Tsanaga region as all its six health districts have cases of the infectious disease. The current outbreak has already resulted in more than 200 deaths out of the 1,500 cholera cases reported here since June.

According Cameroon’s Minister of Public Health Andre Mama Fouda, “poor sanitation and limited access to good drinking water are the main causes of recurrent outbreak in the Far North. A majority of those infected with the disease are children under the age of five and women.”

Since 2010 three cholera outbreaks have been declared in Far North Region:

“Cholera in this region is not only a water scarcity problem, it also aggravated by the poor hygienic practices that are deeply rooted in people’s culture. Water is scarce and considered as a very precious commodity, but handling it is quite unhygienic,” Félicité Tchibindat, the country representative for the United Nations Children’s Fund (UNICEF) Cameroon, tells IPS.

Cultural practices are still primitive in most villages and urban areas.

Northerners have a culture where people publicly share water jars, from which everyone drinks from.

“These practices and many others make them vulnerable to water vector diseases. [It is the] reason why cholera can easily spread to other communities. Cholera outbreaks are a result of inadequate water supplies, sanitation, food safety and hygiene practices,” Tchibindat says.

Open defecation is also common in the region. According Global Atlas of Helminth Infections, 50 to 75 percent of the rural population in Far North Cameroon defecate in the open, compared to 25 to 50 percent of people in urban areas.

Water sanitation and health (WASH) is vital for development, yet Far North Region has some of the most limited infrastructure in the entire nation, coupled with security challenges as the region is increasily throated by Nigeria’s extremist group Boko Haram.

Poverty is high in the region, UNICEF’s Tchibindat says. And the security issue in neighbouring countries has not helped Cameroon provide proper access to medical services here.

According to UNICEF, major challenges abound in Cameroon. There is a low capacity of coordination for WASH at all levels, and poor institutional leadership of sanitation issues. The decentralisation of the WASH sector means there is no proper support with inequitable distribution of human resources in regions.

“The government and many development partners have provided boreholes to communities and the region counts more than 1,000 boreholes today,” Parfait Ndeme from the Ministry of Mines, Water Resources and Energy says.

But about 30 percent of boreholes are non-functional and need repair, according to UNICEF.

Ndeme explains that, “the cost of providing potable water in the sahelian region might be three times more costly than down south. Distance is one major factor that influences cost and the arid climate in the region makes it difficult to have underground water all year round.”

“The Far North has limited access development which also has a direct influence of the quality of health care,” Tchibindat says.

The unavailability of basic infrastructure and equipment in health centres makes it difficult to practice in isolated rural areas. Consequently, most rural health centre have a high rate of desertion by staff due to the low level of rural development, she adds.

Most of Cameroon’s health workers, about 59.75 percent, are concentrated in the richest regions; Centre, Littoral and West Region, serving about 42.14 percent of Cameroon’s 21 million people.

According to the World Health Organisation:

“Due to lack of equipment in hospitals, the treatment might only start after a couple of hours increasing the probability of it spreading,” Peter Tambe, a health expert based in Maroua, the capital of Far North Region, tells IPS.

“Report of new cholera cases are numerous in isolated villages and the present efforts by the government and development partners are not sufficient to treat and also monitor prevalence,” Tambe says.

Since the discovery of cholera in the region, the government and UNICEF and other partners have doubled their services to these localities to enforce health facilities and provide the population with basic hygiene aid, water treatment tablets and free treatment for patients, regardless of their nationality, along the border with Chad and Nigeria.

“Despite insecurity challenges facing this region, the government and its partners have embarked on information exchanges with Niger, Chad, and Nigeria to avoid further cross-border cases,” Public Health Minister Fouda tells IPS.