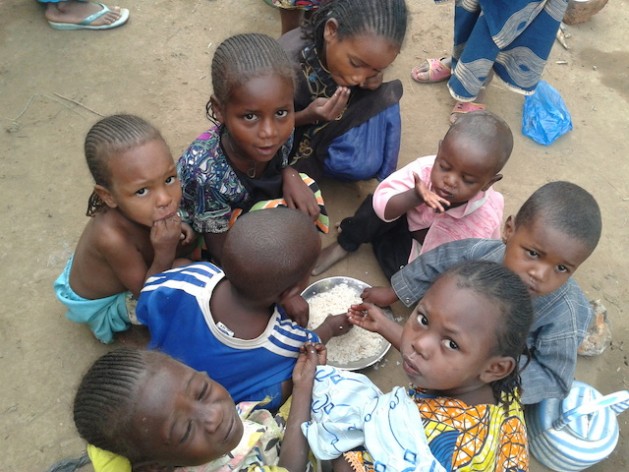 In February, some 30,000 refugees — the largest number since the crisis began in CAR last March — crossed the border into Cameroon, according to the United Nations Refugee Agency (UNHCR). And the small border town of Garoua-Boulai is struggling to meet the basic needs of both refugees and local residents.

“Over 100 trucks came in from CAR with refugees yesterday and some are already arriving today.” -- Ngotio Koeke, the Cameroon Army Commander in Garoua-Boulai

Since their arrival, Karim and 32 members of his family, have been sharing 50-square-metre UNHCR tent, in a temporary refugee camp called Pont-Bascule, in Garoua-Boulai.

“I am here with my two wives, my children, my brother’s children and my mother. We left CAR with nothing. We solely depend on UHNCR for our needs,” he told IPS.

Karim and thousands of others of refugees are waiting for UNHCR Cameroon to register them and find them places to live. According to UNHCR aid workers, several citizens from Chad and Nigeria who were in CAR and fled the violence are currently in Garoua-Boulai.

Violence between Séléka-aligned Muslims and and the anti-Balaka Christian vigilante militias has killed two thousand people and displaced a quarter of the country’s four million population since Séléka rebels staged a coup last March. It is estimated that almost 130,000 refugees from CAR are currently in Cameroon. 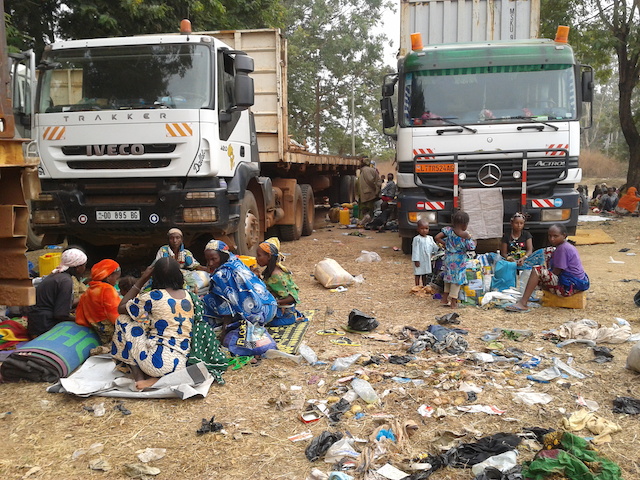 Many of the refugees enter Cameroon’s eastern border town of Garoua-Boula by travelling on the cargo trucks that make deliveries to CAR’s capital, Bangui from Cameroon. Courtesy: Monde Kingsley Nfor

The number fleeing CAR increases daily. Each day hundreds of container trucks from Cameroon’s Douala International Airport make their way into CAR along the Garoua-Boulai highway. And each day almost a hundred trucks return to Garoua-Boulai carrying mainly Muslim refugees brutalised by the anti-Balaka Christian militia.

“Over 100 trucks came in from CAR with refugees yesterday and some are already arriving today. This has been the case since February,” Ngotio Koeke, the Cameroon Army Commander in Garoua-Boulai, told IPS.

Adamu Usman, a truck driver told IPS: “We have been transporting many refugees each time we offload the trucks and return to Cameroon from Bangui [CAR’s capital].”

“I can’t estimate how many refugees my truck carries but it could be close to a hundred people.”

He explained that during his most recent trip to CAR, he witnessed some of the most heart-breaking tragedies.

“A pregnant woman on board my truck suddenly began having labour pain and lost her baby before we reached Cameroon,” Usman said.

He explained that when they reached an anti-Balaka blockade and were forced to stop “the anti-Balaka young men entered the truck” and left soon after without harassing anyone because they saw “this woman lying down in blood with a dead baby by her.”

Most of the refugees are indigenous Mbororo people from western and northern CAR who have been targeted by militia groups for their wealth and livestock.

“We did not even know who Séléka was, but now we are the ones to suffer. It is not fair for every Muslim to be hated. We do not even look like the Chadian Muslims in CAR but they still attack us,” a Mbororo refugee named Abdul told IPS.

Abdul says even if the violence stops, he won’t return home.

“I don’t have anything. I left behind a herd of cattle. I will not get it back if I ever go back.”

While adults in the camp worry about the uncertain future that awaits them and their large families in Cameroon, children can be seen staying close to their mothers, sharing meals from common trays, while others play, enjoying their new environment and having numerous playmates.

But the situation in Garoua-Boulai is far from idyllic. The town’s mayor Esther Yaffo Ndoe told IPS that their small community does not have the capacity to deal with the refugees.

“Garoua-Boulia is town with a population of just 40,000 but today we are close to 80,000 people because of CAR crisis … the present needs of the town in terms of health, food and shelter exceed the capacity of the local administration and aid agencies. Refugees have been staying in the temporary site for more than two months today waiting to be transferred on,” Ndoe said.

She said amid the influx of refugees, it was becoming difficult for locals to survive “as scarce resources are now shared with refugees.”

Food has become scarce and the prices of goods and services are increasing. There has been an upsurge in prices of basic foods like rice and maize. A kilogram of rice that used to sell for one dollar, now sells for 1.50 dollars. Maize has increased from 80 cents to one dollar per kg.

But Ndoe complained that the presence of the refugees has increased insecurity and also juvenile delinquency in the town.

Buba, 24, a local farmer and a motorcycle rider in Garoua-Boulai, told IPS that his farm had been vandalised by some of the refugees.

“The sticks I used in the fencing on my farm have been partly destroyed by refugees. My farm is now exposed to cattle [who eat the crop]. Some of the refugees are harvesting premature crops from people’s farms.”

However, many of the refugees are engaged in petty trading, selling firewood and basic foodstuffs to their fellow refugees and to local residents for their survival.

But the health of the refugees is also a concern as many have problems related to malnutrition, diarrhoea, gastrointestinal disorders and malaria, according to Médecins sans Frontières (MSF).

“Until the refugees are settled in camps and have access to clean water, sanitation, food and shelter there is also risk of epidemics of cholera, measles and malaria. These risks are increased as the rains have started and vaccination is needed,” Jon Irwin, MSF’s head of Mission to Cameroon, told IPS.

He explained that they were focusing on caring for children suffering from acute malnutrition. According to UNHCR, 51 percent of the refugees from CAR in Cameroon are children under the age of 11.

“Malnourished children are more vulnerable to malaria and chest infections and this is exactly the trend we see with the Central African refugees in Cameroon,” Irwin said.

MSF has called for urgent mobilisation of humanitarian actors and stakeholders so that the necessary resources are made available to the refugee population who are scattered across Cameroon’s border. The MSF mobile clinic, which provides assistance to refugees in different towns and villages along Cameroon’s border, attends to about 70 people daily.

“Logistically, it is also difficult for our teams to provide care to refugees who are disseminated in several locations. We want to provide health care to a maximum number of people but we spend a lot of time travelling in order to access the refugees who need us more,” Irwin said.