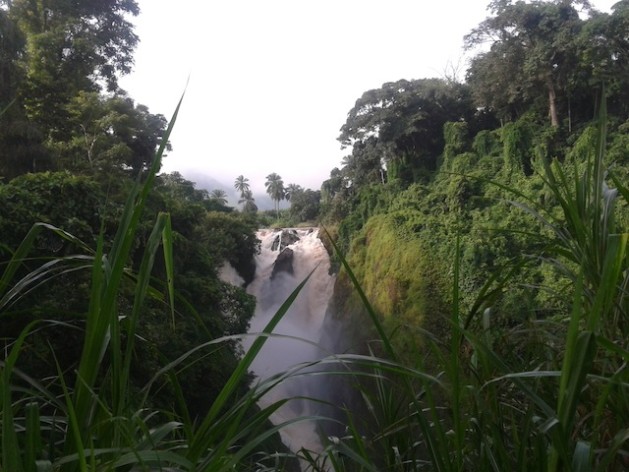 The Menchum Falls in Cameroon could be a great opportunity for REDD and ecotourism says Joseph Amougou, from the National REDD Coordination in the Ministry of Environment and Nature Protection and Sustainable Development. Credit: Monde Kingsley Nfor/IPS

YAOUNDE, Aug 8 2013 (IPS) - Uncertainty over property rights and access to forest land is potentially a major stumbling block for implementing the United Nations collaborative initiative on Reducing Emissions from Deforestation and forest Degradation in Cameroon.

In Adjab, an indigenous village in the southern region of Cameroon, Chief Marcelin Biang told IPS he feels the present regulations are pushing locals to damage the forest in order to establish their claim to it.

Following a land dispute between Adjab residents and a timber company, a piece of their land was given back to them – but on condition that the villagers “show proof” they are using the land to sustain their livelihoods.

Biang said that they depend on the forest for hunting, growing vegetables and collecting wood. Farming large plots of land is not part of their culture, but now they must learn to grow oil plams and rubber trees to be able to keep their land.

“We are confused about what to do,” said Biang. “They ask us to conserve the forest, but when we do, timber exploiters come in.”

“Even if REDD+ doesn’t bring the money, let it bring good governance.” -- Augustine Njamnshi, of the NGO Bioresources Development and Conservation Programme Cameroon

Cameroon’s plans to implement and successfully carry out REDD projects will hinge on the country resolving long-standing challenges in managing forests and other natural resources.

“Forest countries can receive payments for stocking carbon, but this must result from effective planning and implementation of the Readiness Preparation Proposal (RPP),” Serge Menang, senior environment specialist with FCPF in Cameroon told IPS.

The FCPF granted Cameroon 3.6 million dollars towards implementation of its RPP, which sets out the national strategy.

Countries in the global South hope to receive significant payments from polluters in the North in exchange for conserving and expanding forest cover. Trees hold stocks of carbon, which would otherwise be released into the atmosphere, where it would contribute to global warming through the greenhouse effect.

REDD schemes are meant to reward preservation of forests with carbon credits, which can be sold to polluting companies in the North wishing to offset their harmful emissions. REDD+ extends the concept of rewarding carbon storage beyond forests and plantations to include agriculture.

“Cameroon’s REDD+ strategy is based on a national vision of making REDD+ a tool for the socioeconomic development of the nation. It must be used to better the livelihood of communities,” Joseph Amougou, from the National REDD Coordination in the Ministry of Environment and Nature Protection and Sustainable Development told IPS.

Achieving this vision will require addressing existing governance challenges, including reviewing and strengthening policy and ensuring informed, meaningful participation by forest-dependent communities – particularly by marginalised groups in rural areas such as women and indigenous peoples.

“REDD will not work in Cameroon without development from below. It cannot be implemented without accounting for the activities of the local population who practise agriculture, forest exploitation and livestock farming. REDD should improve their activities and living conditions so that these local communities don’t put as much pressure on the forest,” Amougou said.

“For example, in the northern part of Cameroon where the problem is energy [from firewood and charcoal], REDD must prioritise the energy needs of the people.”

Several platforms are already in place to support this type of participation. The National Steering Committee – which includes representation of indigenous peoples – brings relevant government ministries together with civil society organisations and NGOs, while the REDD and Climate Change Platform provides civil society and local communities with an independent coordinating body.

Haman Unusa is from the Ministry of Environment and Nature Protection and Sustainable Development’s National REDD+ Coordination Unit, the body responsible for technical functions including meetings and consultation. He told IPS that indigenous peoples participated in consultations throughout the process of developing the RPP. This will continue in the implementation phase.

“A roadmap for integrating gender in the REDD+ process has been developed and will be enhanced as part of the development of the strategy. Women are also represented on the national bodies – in fact, one of the managerial positions of the national coordination is reserved for a woman,” said the official.

Unusa added that the communications strategy in the implementation phase will include the use of local languages and visual forms of communication such as posters and billboards. Translators and interpreters will also be used to facilitate two-way communication between REDD+ facilitators and local people.

Yet these plans for enhanced communications may point to shortcomings in the process so far. According to Aehshatu Manu, who has represented indigenous Mbororo women in the FCPF meetings, many local women are still unaware of what REDD seeks to achieve, and fear they will lose access to the forest for such things as building materials, medicinal plants and food.

“Despite the participation of our men and women in meetings,” she told IPS, “effective participation is yet to be achieved through the communications strategy that is in place. REDD is still misunderstood by local communities.”

Amougou said that policy makers are “facing a number of challenges in designing and implementing REDD strategies and policies.”

“REDD is new, but it must be built on existing assets and insights from previous policy interventions. REDD can be realised with the national policies, institutions and actions already in place,” he said.

Another threat to implementation comes from a lack of financial resources. The 3.6 million dollars from the FCPF is welcome, but the total budget for Cameroon’s RPP is 28 million dollars, and it is not yet clear where this money will come from.

“To be able to close such financial gaps, Cameroon’s REDD+ strategies should rely on already existing resources such as forest inventory data, REDD feasibility studies of drivers of deforestation and conservation efforts,” Menang said. “And the government and other development partners must support the process financially.”

Finding the rest of the money required may be a challenge, but Augustine Njamnshi of the NGO Bioresources Development and Conservation Programme Cameroon sees benefits even if those funds are not found. “Even if REDD+ doesn’t bring the money, let it bring good governance.”