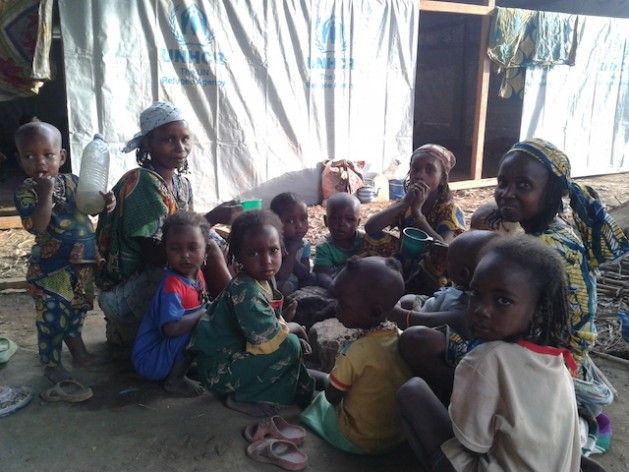 GUIWA, Cameroon, Jun 24 2014 (IPS) - Central African Republic refugees living in Cameroon’s East Region are increasingly becoming frustrated about their deteriorating living conditions and their inability to support themselves as conflict between them and and local villagers has escalated over depleting resources.

They say they have been denied access to farm tools as aid agencies fear they may use them as arms against the local population.

Clay-Man Youkoute, head of refugees in Guiwa camp, told IPS that aid agencies showed the refugees pieces of land that they could cultivate.

“Before starting work on the land, aid agencies refused to give us the right farm tools. They say if they give us machetes we will use as weapons against local population. This is very insulting.

“We went further to toil in the bushes with unsuitable farm tools just to be denied access to the farms later,” Youkoute said, explaining that “the local chief and his population drove us from the land saying that we have no right to their land.”

Now Rosaline Kusangi, a mother of three, has resorted to harvesting wild forest fruits to earn a living. She walks five kilometres to a nearby forest to harvest wild mangoes daily. She then sells the mangoes at the Guiwa market square.

“I cannot have a farm, so I depend on wild fruits for survival but the locals still think I have no right to the fruits because I am a refugee,” Kusangi told IPS.

About 1,500 refugees have settled in Guiwa, eastern Cameroon as part of the first influx from CAR after the April 2013 coup d’état that ousted President François Bozizé. However, in May 2013 a number of refugees began abandoning the border camps because of the poor living conditions there and made their way to Guiwa village. It is estimated that over 200,000 refugees from CAR are currently in Cameroon.

But even in Guiwa refugees live in squalid conditions and in tents that are wearing out quickly. There is a lack of water and proper waste treatment facilities.

“We have been here for more than a year still living in worn-out shelters. During the dry season it is very hot inside and it leaks when it rains. Moreover, insects and snakes find their way easily into the tents,”Jodel Tanga, a CAR refugee, told IPS.

In addition to poor living conditions, infections and malaria has increased during the first two months of the rainy season.

“Each day, about 10 people are sick with malaria and stomach disorders since the rains started. All the wells that were dug by the United Nations Refugee Agency [UNHCR] have dried up or are unclean, so we have to go two kilometres to fetch water,” Juliana Manga, a CAR refugee who has taken responsibility as health assistant in the Guiwa camp, told IPS.

“When we go to the clinic, we are always the last to be served. They say we should allow the people of the land first. The nurses in hospitals make comments and gestures that are insulting.”

Manga also complained that local school authorities did not allow their children to attend school because of limited space in classrooms.

The number of refugees crossing from CAR into Cameroon has dropped from more than 10,000 a week before March to about 1,000 weekly.

But the influx has already changed the make-up of most towns in East Region.

According to Guiwa local councillor, Joseph Kwette, the local community are concerned about their own security and livelihoods since the start of the refugee influx.

The locals’ water supply has been severely compromised. Local children are forced to travel long distances to fetch water and fire wood. The cassava tuber, which is the most consumed food in the region, has also become scarce and sells for double its price on the market.

“Lack of water in the refugee camps and deforestation by refugees has also threatened the food security of the Guiwa population who also depend on forest products and water for survival. Prices of goods has increased and petty theft is common,” Kwette said.

According to the police commander in Guiwa village, criminal activities have increased over the last year.

Refugees have been accused of being behind the recent spate of armed robberies and increasing sex trade.

In January, CAR refugees had taken hostage two United Nations aid workers to protest a lack of needed aid. In early May, a group of armed men from CAR abducted 18 civilians who were travelling in east of Cameroon.

But the refugees argue that they are simply victims of circumstances and are not given some of the basic human right to freedom of movement.

“We are seen as criminals because we don’t have identification papers. The police incriminate us and many refugees find themselves in Bertoua prison just because they attempted to move and search for jobs in the urban area. There is no paper to identity us as CAR refugees registered by the UNHCR,” said Youkoute, head of refugees at Guiwa camp.

Aid agencies in Cameroon have declared the current situation an emergency and have called for more aid.

The World Health Organisation has declared that health facilities are terribly understaffed and lack water and electricity. Humanitarian workers on the ground are over stretched and medical supplies are also running out.

The U.N. World Food Programme’s food stores are running empty and there is urgent need for funds to buy more food and nutritional supplements for malnourished children.

“The needs of refugees are colossal, the most pressing needs is that that of housing, food and health. Many more sites have been identified to host the refugees camped in villages,” Faustian Tchimi, Cameroon Red Cross director in East region, told IPS.