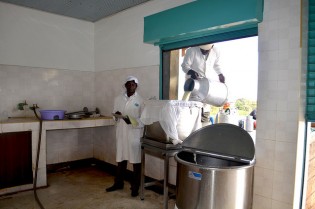 Rural Co-ops in Central America Speak Out on Climate Change

By Edgardo Ayala
Brenda Salazar has her sights set on two things: a good organic cacao harvest for the cooperative she belongs to in northern Nicaragua, and for the governments of Central America to heed the ideas of peasant farmers who have organised to fight climate change.

By IPS Correspondents
“One in eight people goes to sleep hungry every day,” according to the ‘State of Food Insecurity in the World 2012’, a document released annually by the Food and Agriculture Organisation (FAO).

By Sabina Zaccaro
It is a tried and tested truth that when women come together in groups they can address their issues more powerfully than they can as individuals.
ADVERTISEMENT ADVERTISEMENT