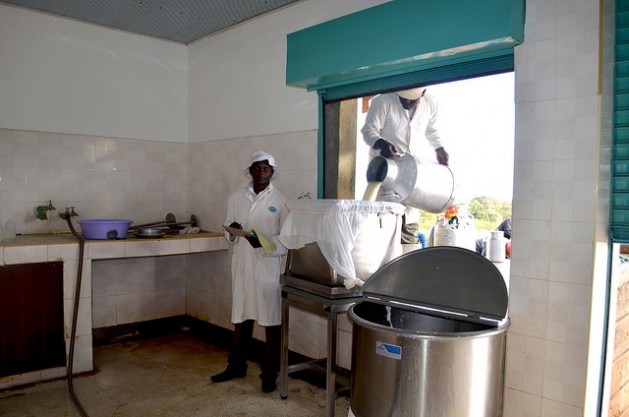 NG’ARUA, Kenya, Jun 7 2016 (IPS) - Daniel Mithamo, 28, grew up knowing that dairy farming is about producing milk in large quantities. You sell a few litres, consume some with your family, and dump the rest for lack of cold storage and decent roads to access markets.

Mithamo little knew that one day he would manage a successful dairy farmers’ co-operative, the Ng’arua Co-operative Society Limited. It is swiftly becoming a model for the region – and proof that relatively small investments can bring big development returns.

Until 2014, the best market for the Society’s milk was in Nyahururu, 52 kms from Ng’arua’s town of Kinamba, but getting the milk out of the villages was a nightmare.

“The people of Ng’arua are hardworking farmers, but they have lived in extreme poverty due to lack of a preservative mechanism for their milk. Bad roads made things even worse.  Brokers also took advantage of the situation to exploit the farmers,” Mithamo told IPS.

But now, Ng’arua dairy farmers no longer experience perennial loss of income through milk wastage as it was in past years.

The farmers incurred losses amounting to a million shillings every year, resulting from dumping a thousand litres of milk every day. Devolution has changed everything for the better, as the county government bought milk coolers for five co-operatives, bringing dumping of milk to an end.

“Our members incurred losses amounting to millions of shillings in the past, resulting from wastage of milk for lack of storage facilities, especially during rainy seasons, when roads are nearly impassable,” said the society’s chairperson, Joseph Waiganjo.

“We now have a reliable source of income to feed and educate our children, and invest for the future." -- Meshack Njuguna

The co-operative, with over 20,000 direct beneficiaries, has created over 100 jobs for youth, including the Ng’arua Boda-Boda (motorcycle taxi) Milk Transporters Self-Help Group. The 32-member group provides transportation of milk from the farmers to the cooler in Kinamba.

Depending on weather conditions, each boda-boda delivers between 350 and 700 litres of milk daily. But during the rainy season, a lot of milk is left in villages.

“We now have a reliable source of income to feed and educate our children, and invest for the future. The project has improved our economic status,” group chairperson Meshack Njuguna said.

In addition to the 10,000-litre cooler imported from Greece, the county government also financed the construction of the buildings and bought all the equipment needed for smooth operation of the project.

Brookside Dairy is the sole market for all the milk from the co-operative. The company has provided a technician to offer quality assessment and advisory to the staff and management of the cooling plant.

Besides the technical support, the company also provides detergents to ensure that the milk is received and handled in a clean environment.

“The collected milk undergoes a biological quality test before being put into the cooler, awaiting daily collection by the Brookside trucks for final processing,” technician David Kungu said.

The Society entered into a renewable one-year contract with the Brookside Dairy. According to the contract, Ng’arua Co-operative is expected to supply between 7,000 and 8,400 litres every day, out of the present output capacity of 9,000 litres.

The Society is a role model for all the dairy co-operatives in the county, with efficient management and workers, and supportive members. It started in 2011 and by 2013 it had 500 members, and annual gross income of 5,400 dollars. It transported all its milk to the Brookside depot in Nyahururu.

The intervention of the county government in 2014 has seen membership rising to 2,800 and the income going up to 960,000 dollars.

Besides the numerous achievements, Ng’arua Co-operative is not free of challenges. The most critical is dependence on a single market – the Brookside is the only buyer.

As the membership continues to grow, output is also increasing. The management, therefore, feels that additional markets are required, because the Brookside collects a maximum of 8,400 litres as per the current agreement.

According to the society manager Mithamo, the agreement provides that the society will supply between 7,000 and 8,400 litres per day at Kshs 37/= (.037 dollars) per litre.

On the other hand, the majority of members require education on storage of fodder to mitigate the effects of climate change, during the dry spells, when the milk supply is generally low.

Ng’arua Co-operative has not declared any dividend for its members since it was formed in 2011. All the profits are capitalised to cater for expansion for the growing membership and output.

However, members enjoy a lot of benefits, such as input credit against future sales, education on dairy farming techniques and management, including interest free cash advances.

The co-operative is working on value addition as part of its expansion programme in the 2016 financial year. This will include processing and distribution of Yoghurt in the local market – retail and wholesale shops, and supermarkets in Laikipia, Nyandarua, Nyeri and Nakuru Counties.

Provision of artificial semen to members at a fee is also in the plan.

It is therefore evident that devolution is not just a political structure or transformation, where the government comes closer to the people to supervise them, but it is a total change of political and economic orders.

“Laikipia was one of marginalised counties in Kenya, with poor roads since independence. The state of the roads in the county has been a major challenge and contributor to the high percentage (46 percent) of people living below poverty line (less than a dollar per day),” farmer Margaret Maina said.

Margaret believes that a prosperous future in the country and sustainable development, especially in Laikipia, will depend on devolution.

Like in many parts of the country, rural access roads in Laikipia County are dilapidated. The 2012 statistics indicate that the county total classified road network was 1,038.1 Kms of which over 80 percent are feeder roads.

The bitumen surface is 139.3 kms, covering Nyeri-Nanyuki, Nyeri-Nyahururu, and Nyahururu-Kinamba-Rumuruti roads. The gravel surface was 296.9 kms and 601.9 kms of earth surface.

The county is 9,462 square kms and ranches occupy about half of the area. Laikipia is geographically ranked the 15th largest county in the country despite its low population, estimated to be 427,173 in 2012.

“We are opening up rural roads to enable our farmers to take their products to marketplaces at all seasons,” the Chief Officer, County Ministry of Roads and Infrastructure, engineer Peter Macharia said.

The larger part of the county is accessible through the use of boda-boda, and it will take some years before modern modes of transport can go into villages. Economic analysts believe that Kenya will have no marginalised area in the next few years, as it was since independence.