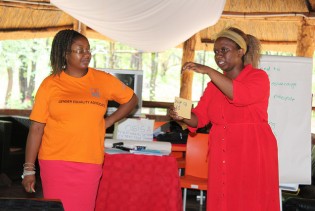 By Mavic Cabrera-Balleza
I am one of millions of women who posted #MeToo on social media. The call to post was like a flash of light that brought back vivid memories of cat calls, male colleagues making passes, lewd jokes, men rubbing their bodies against mine in packed buses and trains and a man in an act of public sexual self-gratification on the subway.

By Audrey Azoulay
Information and communication technologies have the potential to open up new worlds of ideas and the media - television, newspapers, advertising, blogs, social networks, film – is increasingly omnipresent in the lives of many of us. In line with one of the major themes of this year’s Commission on the Status of Women, UNESCO is assessing how the media and ICTs shape the lives of women.

Ensuring Equality & Inclusion Essential to Weed Out Roots of Extremism

By Ambassador Anwarul K. Chowdhury
In the next seven days two of the biggest events that drive the women’s equality agenda will energize all well-meaning people of the world. The first on 8 March the International Women’s Day will assert renewed energy for women’s activism for peace, rights and development.

By Peter Kagwanja and Siddharth Chatterjee
March 8, 2018 International Women’s Day offers another opportunity to reflect on the progress made towards gender equality and women’s political rights.

By Richard Barathe
Women’s role in the workplace is at the heart the International Women’s Day commemoration. Even though it first celebrated a demonstration by women workers in New York in 1857, it was the killing of nearly 150 young women workers in a sweatshop, engulfed by a massive fire in just 20 minutes, which marked the modern celebration of International Women’s Day, in New York’s Triangle Shirtwaist Factory on 25 March 1911.

By Victor Tsang and Shari Nijman
When Mandelena became a mother, she was only 16. During the prolonged dry season in Gwor County, South Sudan, her community saw crops failing and cattle dying. Children stopped going to school because of hunger and women and girls had to walk up to five hours every day to collect water.

By Sopho Kharazi
As a student in Rome, the closest event that left a mark in my life was the Women’s March in the Italian capital. The march allowed me to contribute to the empowerment of women and to demonstrate that no woman is free-- even if one’s rights are being violated. #MeToo.

By Sanam Naraghi-Anderlini
In 1909, the Socialist Party of America, in support of female garment workers protesting working conditions, designated March 8 as a day to honor women. By 1917, women in Russia were protesting for ‘bread and peace’ against a backdrop of war. In recognition of that protest and women’s suffrage in Soviet Russia, The International Socialist movement designated March 8 as International Women’s Day.

By Akinwumi A. Adesina
International Women's Day is a call to celebrate the extraordinary achievements of women and a reminder that globally, we are a long way from achieving gender equality.
ADVERTISEMENT ADVERTISEMENT