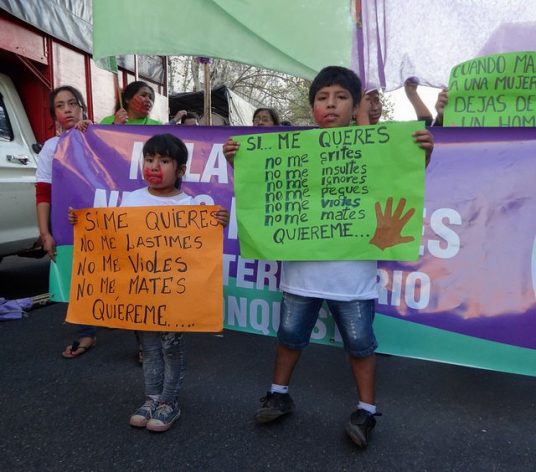 A girl and a boy hold two posters, one of which reads: "If you love me, do not hurt me, do not rape me, do not kill me, love me", during one of the demonstrations in Buenos Aires under the slogan "Ni una Menos" (Not one [woman] less), held since 2015 against gender violence. Credit: Fabiana Frayssinet / IPS

BUENOS AIRES, Mar 5 2018 (IPS) - From the Argentine slogan “Ni una menos” (Not one [woman] less)” to Colombia’s “Now is not the time to remain silent”, activism against gender violence has grown in Latin America since 2015, with campaigns that have social and cultural differences from the “MeToo” movement that emerged later, in 2017, in the United States.

Mass marches in 80 Argentine cities, in June 2015, with the theme “Ni una menos”, against femicides – gender-related murders – generated a movement that a year later was replicated in Peru, while in post-peace agreement Colombia women revived the slogan “Now is not the time to remain silent”, and in Mexico there was a National Campaign against Femicide with slogans such as “Ni una muerta más” (Not one more woman killed).

"It’s as if a new expression of a diverse feminist collective is emerging, as if there were a true ‘feminist spring’ challenging the foundations of a strong, violent and powerful patriarchy. The struggles are increasingly questioning the power relations in all areas.” -- Carmen Beramendi

The global mobilisation of women against gender violence led UN Women to decide to focus this year’s International Women’s Day, celebrated Mar. 8, on the theme “Time is Now: Rural and Urban Activists Transforming Women’s Lives”, as a way to strengthen movements that are modifying the general perception about the problem.

In the case of Latin America, Montserrat Sagot, director of the Costa Rican Research Centre for Women’s Studies, told IPS from San Jose that in the 1990s the Central American Feminist Network Against Violence Towards Women was a pioneer in demanding laws and public policies against violence.

She said Costa Rica’s law against domestic violence was passed in 1997, and that in Central America a successful campaign began more than a decade ago to introduce femicide as a new crime in domestic legislation, and thus specifically criminalise gender-based murders of women.

“The existing movements are a continuation of these first three initiatives, and respond to conditions of extreme violence against women in the region. Central America is one of the most violent regions in the world outside war zones,” said Sagot, who is also a specialist in gender issues at the Latin American Council of Social Sciences (Clacso), based in Buenos Aires.

For Sagot, feminist activism in Latin America has always been based on a political and structural analysis of violence, understood as a component of a system “deeply interwoven with the conditions of economic and political oppression.”

That, she said, differentiates it from movements born in the industrialised North, such as the “Me Too” movement, which has become viral since October 2017 on social networks, triggered by the sex abuse scandal in Hollywood.

“As an activist against violence for decades, it always seems important to me that voices be raised against this serious and prevalent problem, that voices of famous women join the fight,” said Sagot.

“But this type of movement, from my point of view, homogenises women and makes us all appear as victims of the same forms of violence. There is no analysis of the different forms of violence that affect women according to their class, race, age and migration status, for example,” she said. In Colombia, where a peace deal was signed in 2016 after 52 years of armed conflict, Adriana Arroyo, director of the International Centre of Education and Human Development (CINDE) highlighted the 1996 Women’s Peace Route and the 2009 “Now is not the time to remain silent” movement, among the movements that emerged in response to violence against women.

“Some of the particular characteristics of Colombia are its background of armed conflict, and the sexual violence of all kinds that women and girls have suffered, whose impacts are only now becoming visible,” she told IPS from the Colombian city of Medellin.

In her opinion, landmark cases of femicide in the region “generate a lot of media coverage but not necessarily visible transformations in everyday practices and in ‘machismo’ at a micro level or the broader living conditions of women and girls.”

“I think #MeToo is a valuable opportunity to denounce and make visible the different types of violence that women experience, especially in the workplace, but it is important that it does not lead to vicious extremes, and that other educational actions be carried out as well as social mobilisation to build an understanding of patriarchal violence, its causes, effects and the transformations that are necessary,” she added.

Carmen Beramendi, director of the Latin American Faculty of Social Sciences in Uruguay and alternate senator for the governing Broad Front coalition, told IPS that movements such as the Uruguayan Network against Domestic and Sexual Violence were the ones that created public debate on this issue 20 years ago.

The network was the first to carry out public campaigns with athletes, artists and other well-known figures. “Today they have been articulating with other struggles that have given it a distinctive character, bringing in younger women who are moved to take to the streets, with the slogan ‘Ni una menos’, against street harassment, against trafficking in women,” she said from Montevideo. Protesters holding black crosses symbolising the victims of femicide in Peru and other Latin American countries held a massive march through the centre of Lima in August 2016 under the slogan “Ni Una Menos” (Not one [woman] less). Credit: Noemí Melgarejo / IPS

“It’s as if a new expression of a diverse feminist collective is emerging, as if there were a true ‘feminist spring’ challenging the foundations of a strong, violent and powerful patriarchy. The struggles are increasingly questioning the power relations in all areas,” she said.

Beramendi considered that “more than establishing differences” with movements from the North, “there are issues that unite us with women warriors from different parts of the world.”

But she stressed that the region has unique instruments such as the Inter-American Convention on the Prevention, Punishment and Eradication of Violence against Women adopted by the General Assembly of the Organisation of American States (OAS) in 1994, in the Brazilian city of Belém do Pará.

She said campaigns like #MeToo “contribute to removing from the private sphere forms of oppression experienced by women who have a high level of visibility and who have access to the mass media. I think it’s part of the symbolic conflict.”

The Uruguayan activist dismissed criticism of movements such as #MeToo for taking their activism to events like beauty pageants or artist award ceremonies.

“It is also valid to think what it means that there are more and more places where women with a microphone express the harassment and violence they have suffered. I do not want to fall into a Manichaean vision of the world. Changes always include both ruptures and continuities, on the outside and within ourselves. They do not happen in a straight upward line, and progress contains contradictions,” she said.

Karina Bidaseca of Argentina, coordinator of the South-South Programme of the Latin American Council of Social Sciences (CLACSO), told IPS that movements such as Ni Una Menos or Ni Una Más “have managed to cross borders, to express a collective voice and confront the patriarchal power that structures our societies.”

For her, feminist activism in the North does not represent this region.

The Argentine, Peruvian or Mexican movements, or the “community feminism” in Bolivia or the March for the Good Living of Mapuche indigenous women in Chile and Argentina, “emerge in unique contexts and express specific historical, political and social contexts,” she said.