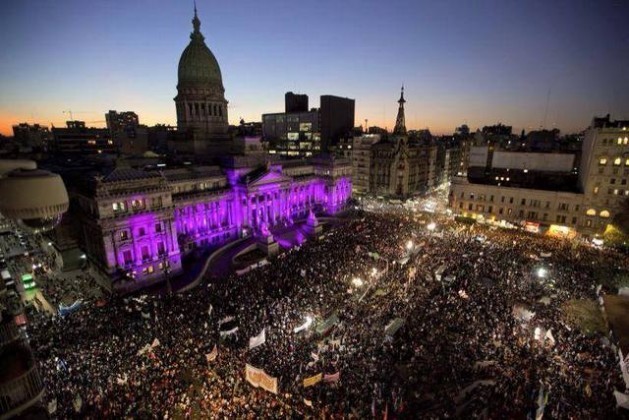 Demonstrators overflowed the plaza in front of the national legislature, in Buenos Aires, demanding an end to killings of women. Credit: Courtesy of Ni Una Menos

BUENOS AIRES, Jun 5 2015 (IPS) - In the wake of the massive response to their call to protest violence against women in Argentina, the organisers of this week’s demonstrations are starting to plan the steps to be taken to get results for their demand “Ni Una Menos” (not one less), taking advantage of the strength in numbers shown to obtain political support for public policies aimed at protecting women.

“This mobilisation has concrete proposals,” said Fabiana Túñez, one of the founders of La Casa del Encuentro, an organisation that took part in the protests that filled the streets of the capital and other cities on Wednesday Jun. 3, demanding an end to gender-related killings.

In an interview with IPS, Túñez said “the hope is that all public officials and possible candidates who were photographed (in the protests) will now respond to the strength shown by the people in the streets and incorporate in their agendas policies to step up the effort to fight violence against women.”

The call to take to the streets emerged spontaneously over the social networks in response to the slogan “Ni Una Menos” (not one less), launched by a group of journalists, artists and activists demanding that women be protected from violent deaths at the hands of men.

The response in Buenos Aires, outside of Congress, and in other cities around the country, was massive: demonstrators overflowed the parks into surrounding streets. In a politically polarised country, the slogan brought together a broad spectrum of mutually antagonistic political parties, trade unions, student organisations, and even conservative religious groups.

“No more femicides”, “Let’s stop raising helpless princesses and violent little men”, “We apologise for the inconvenience, they’re killing us”, “If you love us don’t beat us, don’t rape us, don’t kill us” read some of the signs carried by an estimated 200,000 protesters in the capital alone, according to the most conservative estimates. Most of the demonstrators were women, but there were also a significant number of men and entire families.

“Society is tired of hearing about femicides,” Tuñez said. “And that created a breeding-ground for outrage.”

Based on cases covered by the press, La Casa del Encuentro says that in the last seven years 1,808 women have been murdered in killings whose main motive or cause was gender-based discrimination, leaving thousands of children without a mother and often forced to live with their mother’s killer.

According to statistics provided by the organisation during the protest, which it stressed were not complete, the incidence of femicide increased in this country of 43 million people from one every 40 hours in 2008 to one every 30 hours in 2014.

One of the demands is for complete official statistics on femicide. Others are guaranteed access to justice and protection and more shelters for victims of domestic violence.

“We will try to meet with potential candidates (for the October general elections) to outline proposals along different lines, and we hope they will listen to us, because we will keep saying – and these protests showed this very clearly – that it is a cross-cutting issue,” Túñez said.

“All of the parties must incorporate into concrete proposals what society has already made a concrete agenda,” she said. 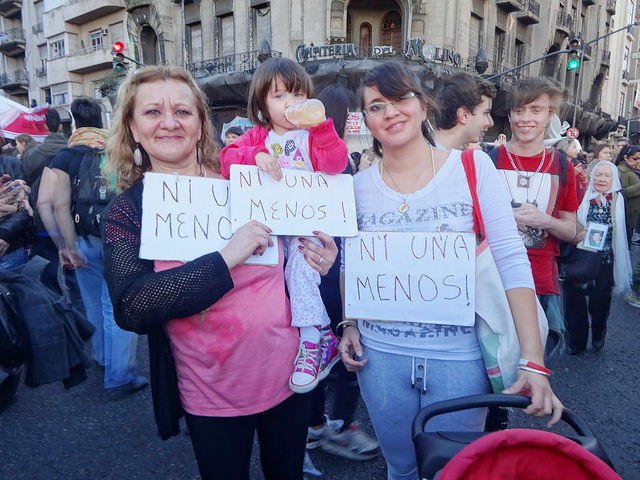 Soraima Torres, her daughter Mariela and her granddaughter, three generations of Argentine women, hold up signs with the slogan “Ni Una Menos”, in the demonstration against femicide in Buenos Aires. Credit: Fabiana Frayssinet/IPS

The document, read out during the demonstrations by artists like cartoonist Maitena (Burundarena), calls for “the implementation, budget funds and adequate monitoring of the National Action Plan for the Prevention, Assistance and Eradication of Violence Against Women, contained in law 26.485 on Integral Protection of Women,” which has not yet been codified.

Making their voices heard
Soraima Torres, a protester, told IPS “We are asking that the laws be enforced. We don’t want sexist judges – we are fighting the fact that anyone has the right to touch or rape my daughter, because she goes out in a miniskirt.”

“Men should be taught not to hurt, not to rape, not to beat, not to kill – and to call for gender equality,” said her daughter Mariela, holding her own daughter in her arms. “I’m not less than a man.”

The organisers also demanded the full implementation of the sex education plan introduced by the government of Cristina Fernández, which is not completely in effect due to pressure from conservative groups.

“I have friends with boyfriends who are verbally violent, or really controlling, who don’t let them go out with their friends,” she told IPS. “And they think that’s normal, because it’s a demand coming from the boy who supposedly loves them.”

As Maitena said, underlying femicides are cultural conceptions “that tend to see women as objects to be consumed and discarded.”

Two students who said this was their first protest told IPS they felt unsafe on the street. “There shouldn’t be the slightest violence on the street, like men shouting at you – you can even be raped or killed,” said one of them, Candela Rivero.

“People always think men are superior to women and that they can shout at you, touch your rear end, do anything they want and you have to put up with it because you don’t know if they’ll grab you or do something to you. You have to keep your mouth shut and just keep walking, afraid.”

The men who participated in the protests are prepared to take part in the struggle.

Economist Sergio Drucaroff told IPS that “Changes should also be demanded on TV if we really want to eradicate gender violence. The number of commercials that put women in the place they occupied five decades ago is obscene.

“Do they think I don’t also buy laundry soap, detergent or pasta? And it is unacceptable that dozens of programmes have segments dedicated to sexist jokes that degrade women,” he added.

Public employee Luis Bignone told IPS “As men, we have to raise awareness among all those ‘machista’ men who beat their wives, or verbally abuse them, another form of mistreatment. We have to show them that being violent doesn’t make them more macho.”

Many of the complaints targeted the justice system – and some even came from the president, who backed the demonstrations.

“Some judges don’t even bear mentioning: just six months for a man who beat a woman in the street,” said President Fernández.

“It’s not just a judicial or police problem. We’re facing a culture that is devastating to women, wherever they happen to be,” she tweeted.

The families of victims also took part in “The Day Women Said: Enough!” as one local headline described the protests.

One of the cases that caused outrage was the recent murder of Chiara Páez, a pregnant 14-year-old who was beaten to death by her teenage boyfriend and buried in his backyard.

But that was just one of the most visible of the many murders of women at the hands of their current or former boyfriends or husbands.

Julia Ibarra carried a sign with the photo of her 21-year-old daughter Tamara López, who was murdered in El Tigre, a town just north of Buenos Aires where a number of rape and murder cases have been reported, with speculation that drug and people trafficking, and complicity by the authorities, are involved.

“Tamara left home on Jan. 15 at 23:00 and told me ‘I’ll be right back.’ I reported the people who had her feeling terrified. But she turned up dead nine days later,” Tamara’s mother told IPS. Her daughter’s boyfriend was a drug dealer and has been implicated in the deaths of at least two other women.