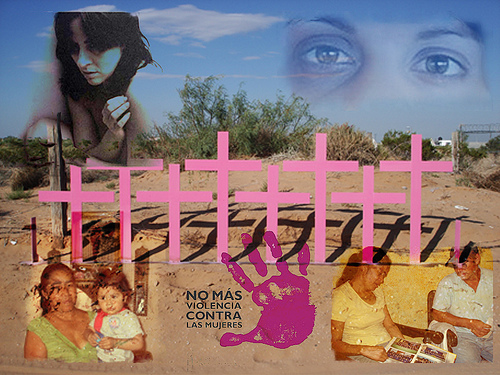 On average, 21 adolescent girls in Argentina are victims of femicides every year, a growing phenomenon linked to domestic violence on the part of current or ex-boyfriends and husbands. Credit: Juan Moseinco/IPS

BUENOS AIRES, Jan 28 2015 (IPS) - The murder of a young Argentine girl on a beach in neighbouring Uruguay shook both countries and drew attention to a kind of violence that goes almost unnoticed as a cause of death among Argentine adolescents: femicide.

In most Latin American countries, the lack of broken-down official data on femicides – a term coined to refer to the killing of females because of their gender – makes it difficult to identify the victims by their ages.

But in the case of Argentina, some independent reports, such as one by the local non-governmental organisation La Casa del Encuentro, have begun to make it clear that not only are there more gender-motivated killings, but the number of victims under 18 is increasing.

“Between 2008 and 2014 we saw the number gradually rising, and this has to do with gender violence among young unmarried couples or sexual abuse followed by death,” the NGO’s executive director, Fabiana Túñez, told IPS.

A report by the “Adriana Marisel Zambrano” Observatory on Femicides documented 295 cases in 2013 in Argentina, a country of 42 million. Between 2008 and 2013 there were 1,236 gender-related murders of women, equivalent to one femicide every 35 hours.

In Mexico, a country of 122 million people, the Network for Children’s Rights (REDIM) reported in December that 315 girls and teenage girls were murdered in 2013.

“Cases of violence against women in Mexico have been on the rise,” reported REDIM, which complained about a lack of actions by the government to prevent domestic violence. “Much of the increase is among girls and adolescents who are victims of violence that in many cases ends in femicide.”

In El Salvador, population 6.2 million, the national police registered 261 femicides in the first 11 months of 2014, 28 of them girls or adolescents 17 or younger.

In Panama, meanwhile, with a population of 3.9 million, three out of 10 victims of femicide are minors, according to the office of the public prosecutor.

According to the Observatory, in that six-year period, 124 adolescent girls between the ages of 13 and 18 were victims of femicide – an average of 21 a year – according to statistics gathered from newspaper reports. But the real number could be much higher, because in a number of cases the victim’s age was not reported.

The release of the report coincided with a case that shocked the nation: the murder of 15-year-old Lola Chomnalez, who went missing on Dec. 28 while on vacation in her godmother’s house in a Uruguayan beach town.

“They found the dead body of the Argentine girl who went missing in Uruguay,” feminist activist Verónica Lemi wrote in Facebook under her pseudonym Penélope Popplewell. “They keep killing us and there are still people asking what one of us was doing walking alone on the beach. You hear on TV: the killer saw a pretty young girl and took advantage of the situation.

“If we have to be protected, carry pepper spray or be accompanied just to take a walk on a beach, then women are not free,” she wrote with indignation. “If we act like we have the same rights as men, we increase the risk that we’ll be killed just because we’re women.”

Sometimes the perpetrators stalk their victims on the street: outside of a discotheque, or on their way home from school or university. But in most cases the victims know their killers.

According to Túñez of La Casa del Encuentro, half of all femicides involve sexual abuse followed by murder. The other half are associated with violence among couples, cases that are often referred to by the media as “crimes of passion.”

The local statistics are in line with a global tendency. The World Health Organisation (WHO) reports that three out of 10 adolescent girls suffer violence at the hands of their boyfriends.

The causes, according to Túñez, are the same as in adults. “The male perpetrator controls, dominates, has jealous fits. And the adolescent girls who are in the first stages of idealising love believe they can change things but they start to get caught up in a big spider web from which they find it impossible to escape later.”

She stressed that it is necessary to raise awareness among adolescent girls to “denaturalise” this kind of behavior.

“It’s not normal for boyfriends to be overly jealous, for girls not to be able to go out on their own, for their boyfriends to control their movements, snoop on their cell-phones, insult them or hit them,” Ada Rico, co-founder of La Casa del Encuentro, told the local media.

“On one hand we have the progress made with respect to women’s rights, but on the other, in terms of idiosyncracies, we are still living in a very ‘machista’ or sexist society in Argentina, where saying something embarrassing to a 15-year-old girl on the street is ok because it means they like you,” the activist told IPS.

“The supposed sexual freedom goes only so far,” she added. “Because every time a girl is abused, the media and commentators say ‘she must have been a little slut’. When a woman exercises her sexual freedom she’s considered a whore.”

Lemi said it is necessary to combat in society “the man-woman relationship where the man is dominant and the woman is submissive, and to counteract the culture of blaming the victim.”

Natalia Gherardi, executive director of the Latin American Justice and Gender Team (ELA), said the apparent increase in the number of femicides could be linked to greater media coverage.

“There is greater visibility, which is why we hear about more cases and deaths, when it’s too late to turn to the authorities,” she told IPS.

Argentina is among the Latin American countries where the most progress has been made in raising awareness on gender equality and women’s access to education and decision-making positions.

In 2012, the Argentine legislature passed a law that stiffened the penalties for gender violence, although it does not include the category of femicide, as in the case of legislation passed in other countries in the region.

The Argentine law provides for life in prison when the murderer is the victim’s current or ex husband or boyfriend, or when the woman is killed for gender-related reasons.

“Progress has been made in terms of insertion in the labour market, in education…but that in itself is not enough to change the ‘machista’, patriarchal culture,” Gherardi said.

The director of ELA said there were shortcomings in implementation, oversight and evaluation of public policies such as the Comprehensive Sex Education law, which takes gender aspects into account.

“I would like to see political leaders, women and men, engaging in meaningful discussions about the violence, above and beyond grand gestures, when appalling things happen,” Gherardi said.

She stressed the fundamental role played by the media in the fight against sexist violence, and added that there are media outlets and journalists who send out messages “that counteract gender stereotypes and others that perpetuate them, putting women in humiliating roles.”

“There are an enormous number of situations of subtle day-to-day violence, before things reach the stage of beatings or femicide,” she said.