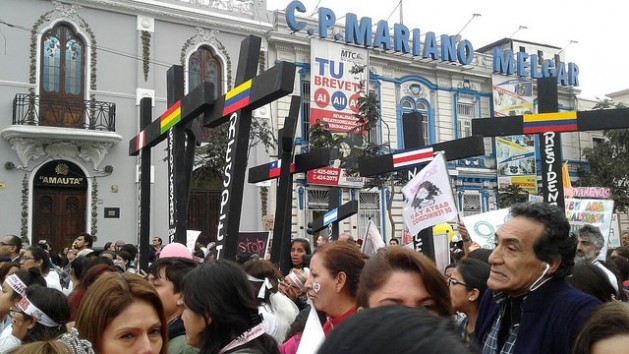 A group of demonstrators with black crosses, symbolising the victims of femicide in Peru and other countries of Latin America, march down a street in the centre of Lima during an Aug. 13 march against gender violence. Credit: Noemí Melgarejo/IPS

LIMA, Aug 16 2016 (IPS) - Peruvians took to the streets en masse to reject violence against women, in what was seen as a major new step in awareness-raising in the country that ranks third in the world in terms of domestic sexual violence.

The Saturday Aug. 13 march in Lima and simultaneous protests held in nearly a dozen other cities and towns around the country, includingCuzco, Arequipa and Libertad,was a reaction tolenient court sentences handed down in cases of femicide – defined as the violent and deliberate killing of a woman – rape and domestic violence.

The case that sparked the demonstrations was that of Arlette Contreras, who was beaten in July 2015 by her then boyfriendin the southern city of Ayacucho, Adriano Pozo, in an attack that was caught on hotel cameras.

“We want justice; we want the attackers, rapists and murderers to go to jail. We want the state to offer us, the victims, safety.” -- Arlette Contreras

Despite the evidence – the footage of the attack – Pozo, the son of a local politician, was merely given a one-year suspended sentence for rape and attempted femicide, because of “mitigating factors”: the fact that he was drunk and jealous. When a higher court upheld the sentence in July, the prosecutor described the decision as “outrageous”.

“We want justice; we want the attackers, rapists and murderers to go to jail. We want the state to offer us, the victims, safety,” Contreras told IPS during the march to the palace of justice in Lima, which was headed by victims and their families.

According to the World Health Organisation (WHO), Peru is in second place in Latin America in terms of gender-based killings, and in a multi-country study on sexual intimate partner violence, it ranked third.

“Enough!”, “The judiciary, a national disgrace”, “You touch one of us, you touch us all”were some of the chants repeated during the march, in which some 100,000 people took part according to the organisers of the protest, which emerged over the social networks and was not affiliated with any political party or movement, although President Pedro Pablo Kuczynski and members of his government participated.

Entire families took part, especially the relatives of victims of femicide, who carried signs with photos and the names of the women who have beenkilled and their attackers.

“My daughter was killed, but they only gave her murderer six months of preventive detention,” said Isabel Laines, carrying a sign with a photo of her daughter. She told IPS she had come from the southern department of Ica, over four hours away by bus, to join the protest in Lima.

Other participants in the march were families and victims of forced sterilizations carried out under the government of Alberto Fujimori (1990-2000). In 2002, a parliamentary investigation commission estimated that more than 346,000 women were sterilised against their will between 1993 and 2000.

In late June, the public prosecutor’s office ruled that Fujimori and his three health ministers were not responsible for the state policy of mass forced sterilisations, and recommended that individual doctors be charged instead.

The ruling enraged those demanding justice and reparations for the thousands of victims of forced sterilization, who are mainly poor, indigenous women.

Over the social networks, the sense of outrage grew as victims told their stories and discovered others who had undergone similar experiences, under the hashtags #YoNoMeCallo (I won’t keep quiet) and #NiUnaMenos (Not one less – a reference to the victims of femicide).

“After seeing the video of Arlette (Contreras), and the indignation when her attacker went free, a group of us organised over Facebook and we started a chat,” one of the organisers of the march and the group Ni UnaMenos, Natalia Iguíñiz, told IPS.

In the first half of this year alone, there were 54 femicides and 118 attempted femicides in Peru, according to the Women’s Ministry. The statistics also indicate that on average 16 people are raped every day in this country. President Pedro Pablo Kuczynskitook part in the march against gender violence in Peru, where 54 femicides and 118 attempted femicides were committed in the first half of 2016 alone. Credit: Presidency of Peru

Women’s rights organisations complain that up to now, Peruvian society has been tolerant of gender violence, and they say opinion polls reflect this.

In a survey carried out by the polling company Ipsos in Lima before the march, 41 percent of the women interviewed said Peru was not safe at all for women and 74 percent said they lived in a sexist society.

Meanwhile, 53 percent of men and women surveyed believed, for example, that if a woman wears a mini-skirt it is her fault if she is harassed in public areas, and 76 percent believe a man should be forgiven if he beats his wife for being unfaithful.

Since Kuczynski took office on Jul. 28, the issue of gender violence has been put on the public agenda and different political leaders have called for measures to be taken, such as gender-sensitive training for judicial officers and police, to strengthen enforcement of laws in cases of violence against women.

“The problem of gender violence is that the silence absorbs the blows and it’s not easy for people to report,” said the president before participating in the march along with several ministers, legislators and other authorities.

Iguíñiz said the march represented the start of a new way of tackling the phenomenon of violence against women in Peru, and added that the momentum of the citizen mobilisation would be kept up, with further demonstrations and other activities.

“Thousands of people are organising. We’re a small group that proposes a few basic things, but there are a lot of groups working culturally, in their neighbourhoods, in thousands of actions that are being taken at a national level: districts, vocational institutes, different associations,” she said.

In her view, the call for people to get involved “has had such a strong response because it is so broad.”

The movement Ni Una Menoshas organised previous demonstrations against violence against women in other Latin American countries, like Argentina, where a mass protest was held in the capital in June 2015.

“We are in coordination with people involved in the group in other countries,” said Iguíñiz.“We’re going to create a platform for petitions but we’re planning to do it at a regional level, in all of the countries of Latin America.”

The private Facebook group “Ni UnaMenos: movilización ya” (Not one less: mobilisation now), which started organising the march in July, now has some 60,000 members, and was the main coordinator of the demonstrations, although conventional media outlets and human rights groups later got involved as well.

In addition, hundreds of women who have suffered abuse, sexual attacks or harassment at work began to tell their stories online, in an ongoing process.

Peruvians abroad held activities in support of the march in cities like Barcelona, Geneva, London, Madrid and Washington.

With reporting by Alicia Tovar and Jaime Vargas in Lima