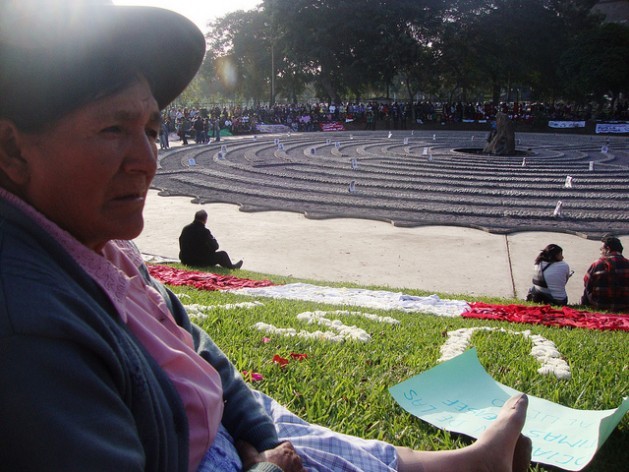 One of the mothers from Ayacucho at the “El Ojo que Llora” Memorial, demanding compensation for her lost loved one. Credit: Milagros Salazar/IPS

LIMA, Sep 2 2013 (IPS) - Venisia Ávalos, a 65-year-old indigenous woman from Peru’s highlands region of Ayacucho, looks for her son’s name among a labyrinth formed by thousands of small grey stones.

Each one of the fist-sized stones carries the name of a victim of the country’s armed conflict between government forces and left-wing guerrillas.

“Here’s my son, here he is!” she cries, bursting into tears. Her son disappeared 30 years ago, and she never found his remains – not even a garment he was wearing that day, not a single trace. Just this small stone, today.

Ávalos came to Lima from Ayacucho in Peru’s south-central highlands to take part in the activities for the commemoration of the 10th anniversary of the presentation of the Truth and Reconciliation Commission (CVR) report.

The CVR estimated that 69,000 civilians – mainly Quechua-speaking indigenous people – were killed by the guerrillas or the state security forces. The Commission held the Maoist Shining Path responsible for just over half of the killings.

Ávalos is not alone here. Dozens of mothers and other relatives of victims from the regions hardest hit by the violence reached the capital on Wednesday Aug 28 to continue to press for two chief demands: comprehensive – in other words, not just monetary – reparations and a thorough search for the remains of the victims of forced disappearance.

These two aspects are enormous debts that the state has so far failed to address in a satisfactory manner, according to a resolution recently published by the Defensoría del Pueblo, or ombudsman’s office.

As of March, the government had paid individual reparations to just 37 percent of the 78,000 people registered to receive compensation, while only 33 percent of the collective or community reparations had been paid, according to official figures.

In the search for the victims of forced disappearance, the work has moved even more slowly. As of April, 2,418 bodies had been recovered from clandestine burial sites, 1,371 of which had been identified and returned to the families.

“Given that not much over 2,000 bodies have been recovered in 10 years, at this pace it would take around 80 years in the best of cases to recover the 16,000 victims that the state estimates are in the burial sites – which is an underestimate,” states the book “Los muertos de Ayacucho” (Ayacucho’s Dead), by the non-governmental Human Rights Commission (COMISEDH).

Ayacucho, one of the poorest and most remote, rural and heavily indigenous parts of the country, accounted for a full 47 percent of the 69,000 victims.

One of the places where the families searching for missing loved ones gathered Wednesday was the “El Ojo que Llora” (The Crying Eye) Memorial, where Ávalos found the stone bearing the name of her son, Rigoberto Huamaní Ávalos.

The memorial has a labyrinth of thousands of smooth stones, each bearing the name, age and year of death of a victim. In the middle of the labyrinth is a sculpture, with a small stone in the form of an eye at the centre, which continuously trickles water, reflecting the grief of the families who want to find out what happened to their loved ones.

“Classmates of my son are now teachers, which he could have been too,” Ávalos told IPS. “They have families, and my son could have had one too.”

Rigoberto was her firstborn. In 1983, the security forces hauled him away from his school along with his teacher and several classmates, says Ávalos, who is furious at what she sees as the pittance she was given in compensation: 10,000 soles (3,600 dollars).

“That’s what my son is worth?” asks the grieving mother, who is a member of the National Association of Families of the Kidnapped, Detained and Disappeared of Peru (ANFASEP), founded 30 years ago in Ayacucho.

The CVR was created in response to demands of the women grouped in ANFASEP.

Isabel Coral, who was executive secretary of the government’s High-Level Multisectoral Commission (CMAN), told IPS that the higher amount was based on an agreement reached directly with Peruvian President Ollanta Humala, who took office in July 2011.

“I explained to Humala that the violence had been so atrocious for these people, who had been deprived of all possible strategies for getting back on their feet and moving ahead on their own, that integral, effective reparations were urgently needed,” she said.

Coral said she had agreed to draft the chapter on compensation in Humala’s government programme in exchange for his compliance with higher payments to the survivors if he was elected.

But today “there is no political will,” she complained, saying the government had not stuck to its promises and had instead been paying out small amounts of money “in trickles”.

In the massacre of Lucanamarca, in Ayacucho, Ervenciana Huancahuari lost her mother, her husband, and a sister. Some of her other sisters lost their husbands too.

She is 64 years old, and has only received 5,000 soles. In accordance with the law on reparations, she will receive the other half of the money when she turns 65.

The money received by Huancahuari has already been distributed among her five children. But the 1,000 soles (357 dollars) that each received is long gone. And she didn’t keep any for herself.

José Sayán, president of CONAVIP, the national umbrella of organisations of families of victims of the political violence, tells IPS that the 14 organisations he represents are demanding the modification of the decree that set the amount of reparations at 10,000 soles per victim, which was approved by Alan García in his second term (2006-2011).

Coral said that in December 2011 she presented a proposal, approved by 11 cabinet ministries, for the government to modify the decree, in order to officially increase the amount of reparations from 10,000 to 39,000 soles. But the ministry of the economy and finance blocked the initiative, she added.

Sayán and other activists met with lawmakers on Aug. 28 to get them to press for the modification of the decree.

Rocío Paz, a representative of the National Human Rights Coordinator, told IPS that the Humala administration had made progress on paper but not in terms of implementation.

Acting ombudsman Eduardo Vega said there had been a “setback” in the area of justice and reparations.

The president of COMISEDH, Pablo Rojas, was also discouraged. But he said the participation of the families in the 10th anniversary of the CVR report helped underscore the urgent need for public policies addressing their plight.

In response, the executive secretary of CMAN, Adolfo Chávarri, told the government news agency Andina on Aug. 29 that more progress had been made with this administration than with the last one.

He also noted that the support provided was not only economic but included scholarships as well as psychological assistance for the families when the remains of their loved ones are returned to them.

But Dora  Astuñaupa, who lost her father during the conflict, in the central jungle region of Satipo, complained that she hadn’t received any kind of support yet. Her eyes shining with sadness and anger, she said a promise was no longer enough.