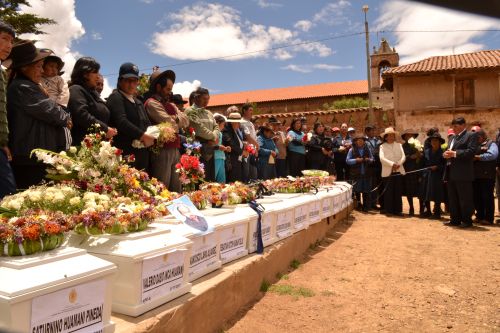 Ceremony held to hand over the remains of victims of Peru’s civil war to family members in Ayacucho. Credit: Courtesy of COMISEDH.

“The exhumation process is slow and disorderly, and moreover it is not a priority for the authorities, even though no democracy can grow strong without reconciling with its past and without recovering its dead,” historian Carola Falconí, executive director of the non-governmental Human Rights Commission (COMISEDH), told IPS.

For example, the forensic medicine institute (IML), which is in charge of the exhumations and answers to the attorney general’s office, does not have a national plan for forensic anthropological investigations to recover the remains of the victims of the civil war between government forces and the Maoist Sendero Luminoso (Shining Path) guerrillas.

Nor do the authorities have up-to-date records on the areas where bodies were buried, often in mass graves, which would give a complete picture of what still needs to be done, says the book “Los muertos de Ayacucho. Violencia y sitios de entierro clandestinos” (The Dead of Ayacucho: Violence and Clandestine Burial Sites), presented by COMISEDH on Tuesday Aug. 28.

The book was published nine years after the independent Truth and Reconciliation Commission (CVR) released its final report, which stated that 69,000 people, mainly indigenous peasants, were killed or forcibly disappeared, as victims of Sendero or the state security forces.

IML officials estimate that there are 15,731 victims – acknowledged to be an underestimate – of the conflict buried at more than 4,000 sites around the country documented by the CVR up to 2003.

But the IML was only able to find 2,064 bodies between 2002 and 2011, which means that at this rate, it would take eight decades to exhume the rest of the bodies, and much more time to identify them and turn the remains over to the victims’ families, says the book, whose journalistic investigation was carried out by this reporter.

The government inaction is especially notorious in the southern department or region of Ayacucho, which suffered the highest number of victims during the armed conflict. Official figures indicate that in the last 10 years, the remains of 1,196 of the 8,660 victims buried there – a conservative estimate – have been exhumed.

COMISEDH reveals in its book that in Ayacucho there are another 1,818 burial sites, besides the 2,234 reported by the CVR in 2003.

The new figure emerges from the updating of the records carried out by COMISEDH from 2004 to 2009, after the CVR stopped operating.

The figure has since been updated, to a total of 6,462 secret unmarked graves.

To locate the sites, a team of COMISEDH researchers headed by Falconí interviewed thousands of family members of victims, survivors and witnesses in some 100 villages and towns of Ayacucho. Several of the experts had been in charge of putting together the original CVR list in that region.

Falconí said that in late September, she would give the updated list to the office of the public prosecutor and the ombudsman’s office, so it could be used as “a tool to draw up a plan for forensic anthropological investigations and an orderly, efficient process of exhumation, in accordance with international standards.”

In its 2003 report, the CVR recommended that the government craft a national plan for forensic anthropological investigations, to make it possible to recover and identify the remains of victims and hand them over to the families, in an efficient and planned manner, especially necessary given the complexity of the events in question and the number of years that have passed.

“It’s not the same thing to exhume the body of someone who died recently as those of people who were murdered over two decades ago,” said Falconí.

Exhuming bodies implies stirring up past crimes. Forensic anthropological investigations make it possible to identify the cause of death, and provide clues as to who may have been responsible, as a result of analysing the bones and scraps of clothing and other belongings and carrying out a reconstruction of events.

The head of the IML, Gino Dávila, told IPS that his team has an annual schedule for exhumations, but that a document with a medium- to long-term scope such as the one called for by the CVR would be difficult to come up with because the government forensic experts work on the basis of requests by the prosecutors who are investigating the civil war-era human rights violations.

“For this year, we have programmed some 400 exhumations, to try to speed things up and gain time. If we assessed what would be needed to complete the work (recover the remains of all of the victims), a great deal of funds would be needed,” Dávila said.

The specialised IML forensic team has a budget of about 600,000 dollars a year – 80 percent less than what Dávila had requested from the attorney general’s office for the purpose of recovering and identifying the remains of victims, including DNA testing.

Only 50 percent of the bodies exhumed have been identified so far. The rest are still pending DNA tests. And in some cases, it is impossible to determine the identity of the victim due to the poor state of the remains, the absence of family members to provide blood samples to match with DNA, or the lack of materials to carry out the required technical process.

This high proportion of unidentified bodies indicates inadequate investigation prior to the exhumation, according to experts at the only two specialised civil society institutions, the Andean Centre for Forensic Anthropology Research (CENIA) and the Peruvian Forensic Anthropology Team (EPAF).

There are family members who have been waiting for results of DNA tests for seven years, when they gave blood samples. The civil society experts say that at the very least, grieving relatives should be informed when a match is made and a body is identified.

In response to the indifference and ignorance of much of society and the lack of political will on the part of the authorities, COMISEDH proposed a plan of forensic anthropological investigations for Ayacucho, in order to recover the victims in a more efficient manner, Falconí said.

The head of the human rights investigation team in the ombudsman’s office, César Cárdenas, said that “Allowing them to stay there (in the ground) is like recognising that Sendero Luminoso, which started the armed struggle, was right. And we know that this is not true.”