SICUANI, Peru, Jul 30 2010 (IPS) - For 26 years, Gregoria Aguilar has been mourning the loss of her son, son-in-law and nephew, who were killed in the biggest massacre committed by the Maoist Shining Path guerrillas in Peru’s highlands. 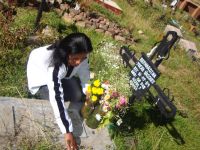 Aguilar, 70, and others who lost loved ones in the killings committed a quarter century ago in Ayacucho are planning a trip to Huamanga, the capital of that southwestern province, to demand justice for their loved ones.

The pilgrimage from their hometown of Sicuani, a day’s travel away, is scheduled for the first half of August, if they manage to drum up the funds for all of them to travel.

“I think about them all the time,” Aguilar told IPS, in tears. “I would like to recover their remains, but I don’t know where they are. Where could they be?”

On Jul. 16, 1984, a group of between 30 and 40 members of the Shining Path used pickaxes, hammers, stones and guns to slaughter around 100 villagers in several locations in the south of Ayacucho province, in a case known as the “bus of death.”

The victims included at least a dozen traders from the market town of Sicuani in the province of Cuzco, to the east of Ayacucho. They just happened to be in the area where the killings took place, buying and selling their goods.

The killing spree occurred early on in Peru’s 1980-2000 civil war, whose epicentre was Ayacucho, where Shining Path first emerged.

Ayacucho, one of the poorest and most remote, rural and heavily indigenous parts of the country, accounted for a full 47 percent of the nearly 70,000 people killed in the armed conflict, according to the Truth and Reconciliation Commission, which issued a report in 2003 after a two-year investigation.

The Commission held Shining Path responsible for 54 percent of the civil war killings.

In 2005, the Human Rights Commission (COMISEDH) took over the forensic investigation into the Ayacucho massacre, which it considers the worst one committed by Shining Path, due to the number of victims and the way they were killed. The non-governmental human rights group is also providing legal assistance to the families.

Some of the bodies of the victims, like those of Aguilar’s loved ones, have never been found. “I don’t believe they’re alive; they killed them. I want them to at least just give me their bones so I can bury them near here,” says the elderly woman, who wants the prosecutors of the province of Ayacucho, who have brought the investigation to a halt, to hear her demands.

Her hometown, Sicuani, is located 740 km southeast of Huamanga, a one-day drive away. Sicuani is located at 3,550 metres altitude and Huamanga at 2,750 metres.

The prosecutors have not yet taken the testimony of the survivors, or ordered the exhumation of the bodies, even though COMISEDH has drawn up a list of 99 victims and identified 34 locations where 72 of them are reportedly buried.

The horror arrived on Jul. 16, 1984 in the bus that came to the highlands in the south of Ayacucho province from Lima every Monday. The guerrillas, dressed in military and police uniforms, had hijacked the bus and made a macabre tour from 7:00 AM to midnight.

In those 17 hours, they stopped in each town and village where the local authorities and community leaders had refused to join Shining Path, survivors told IPS.

In December 1983, residents of the town of Soras had signed an alliance against Shining Path, after members of the rebel group tortured and killed three community leaders in public on Nov. 26.

The Jul. 16, 1984 massacre “was an act of revenge because they were always coming around and telling us to join them, but we wouldn’t listen,” Lidia Jáuregui, a Soras resident whose husband, Jorge Meléndez, was killed by the guerrillas, commented to IPS.

At that time, the Shining Path leader in the area served by the Monday bus was Víctor Quispe Palomino, who today leads a remnant of the rebel group that is once again operating in the region of the Apurímac and Ene river valleys, which run through both Ayacucho and Cuzco provinces.

The traders from Sicuani were killed in Doce Corral, where they regularly bought and sold alpaca wool.

The guerrillas stopped the bus in Doce Corral at 3:00 PM, and split up into groups to interrogate people about their activities against the Shining Path, before killing them with hammers, stones and pickaxes.

“My brother got on his knees and pleaded with them ‘don’t kill me, I have three children’. But they tied him up and beat him, they bashed in his head; that’s what the people who saw him die told me,” Esteban Sinsaya, whose brother Leonardo was one of the Sicuani traders, told IPS.

The only thing the family got back was Leonardo’s blood-stained “chullo” — the colourful traditional alpaca wool hat worn by people in the chilly highlands.

Esteban and Leonardo Sinsaya’s mother, Gabina Colque, cries every time she is asked about her “Nanildo”. The family hopes to recover his remains “to take him flowers; he is of our blood,” Esteban said.

“There has been so much injustice; we have waited so long. Look at us, we’re old already,” said the 53-year-old man, who has spent half his life mourning his brother.

The Sinsaya family will be part of the delegation travelling to Ayacucho, accompanied by representatives of the Catholic church from Sicuani, who have been providing legal assistance to relatives of victims in Cuzco since 2003.

The prosecutor’s office in Cuzco has not responded to the Ayacucho prosecutors’ request that statements be taken from survivors and victims’ relatives. “That’s why we’re doing everything we can to meet with the authorities who are in charge of the investigation,” the Sicuani Catholic vicariate’s lawyer, Wilmer Quiroz, told IPS.

Irene Arunaca and Valentina Aguilar are two women from Sicuani who survived the killings. They were tied up in Doce Corral by the Shining Path guerrillas. But they managed to escape into the mountains, with their babies on their backs.

“We fled without a thing, without a blanket, stepping on the stones so we wouldn’t leave any tracks,” said Arunaca, who remembers that the bus came back at midnight from Soras, where community leaders and local authorities had been killed. The bus was bringing the killers back to finish off any possible survivors.

“The next day, we went down to see the dead, but out of fear we fled back into the hills,” said Aguilar, who is now 67. “After that I had to go back and live there in terror, to get the money I was owed. I was living in a really bad state — some nights I would go up into the hills to sleep, or I would stay out with the livestock.”

Some survived with the marks of torture, like Hilda Condori, 41, who was hit on the head with a hammer and says that ever since then “my head sounds like a river sometimes.”

In the massacre she lost her sister-in-law Bernardina Yucra, the only victim who was actually buried in Sicuani, by her heartbroken husband Prudencio Condori, who dared to fetch her body a few days after the killings.

“We want the state to also exist for us,” said Jacqueline Condori, who lost her mother that tragic day.