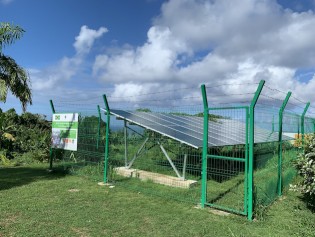 By Alison Kentish
A member-led global coalition of 202 countries and institutions, the NDC Partnership has turned the spotlight on climate action by supporting countries’ efforts to craft and implement Nationally Determined Contributions (NDCs), which outline their commitments to reducing global greenhouse gas emissions.

By Joyce Chimbi
Seychelles’ 115 islands are an exotic ocean ecosystem of beaches, coral reefs, and unique plant and animal species. Concerned with the impacts of climate change, the country has committed to decarbonize by 2050.

By Say Samal and Trần Hồng Hà
The COVID-19 pandemic has disrupted nearly every facet of our lives and delayed what was slated to be a landmark Conference of the Parties (COP26). This pivotal year marks the first due date for countries to submit revised national climate plans per the five-year cycle required by the Paris Agreement. Remarkably, countries are still moving forward with renewed urgency. And many countries are integrating green recovery into their COVID-19 responses, further contributing to climate action. While many countries have positive stories to tell, both of our nations, Vietnam and Cambodia, are sterling examples of nations taking strong, decisive action, particularly with support through the NDC Partnership. Just last month, the people of Vietnam submitted their updated national climate plan and, in short order, the people of Cambodia will do likewise.

Vietnam is the ninth country to submit its updated NDC to the UNFCCC. The submission followed a comprehensive process over three years, under the guidance of Prime Minister Nguyễn Xuân Phúc. Vietnam’s inclusive NDC review and updating process, which was coordinated by the Ministry of Natural Resources and Environment (MONRE), involved active participation by scientists, ministries, agencies, non-governmental organizations, research institutes, enterprises, international organizations, and development partners. MONRE also spearheaded a series of national, sub-national, sectoral, and thematic workshops to assess feasibility, content, and implementation measures.

By Kirla Echegaray Alfaro
On the eve of its bicentennial, Peru is addressing climate change with the needed sense of urgency and ambition. Our inclusive, ‘whole society’ approach aims to awaken new opportunities that are within reach of all of our citizens. Like COVID-19, climate change is a landmark which will have a clearly established before and after period. Without a doubt, it is paving a path towards sustainable development that will improve the well-being of all Peruvians.
ADVERTISEMENT ADVERTISEMENT