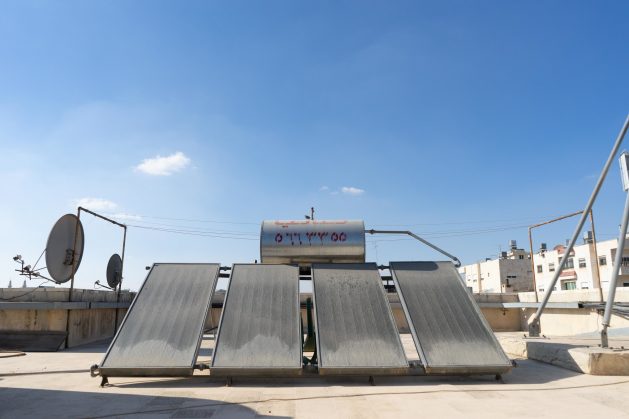 Solar water heaters on top of buildings are found across Jordan. The country has embarked upon a climate-responsive economy recovery and a new growth trajectory strategy. Photo Credit: NDC Partnership

NEW DELHI, India, Sep 24 2021 (IPS) - For the first time in decades, Jordan’s economy contracted in 2020. COVID-19 took a heavy toll on the economy, and it was concerning for the country, particularly because Jordan had managed to grow at an average rate of 2%, despite regional and international shocks to its economy amounting to 44% of Gross Domestic Product (GDP) over the past decade.

The Government of Jordan (GoJ), in light of COVID-19, has taken steps to respond to both the health and economic risks associated with the pandemic. Both are said to be of concern because some of the pandemic restrictions continue to extend into 2021, and economic recovery could be stalled.

One of the key solutions that Jordan has readily embarked on is a climate-responsive recovery and a new growth trajectory strategy. Jordan’s Nationally Determined Contributions (NDC) under the Paris Agreement on climate change is one of the key platforms through which it hopes to achieve its green development measures.

“In Jordan, the focus is on a climate-responsive, green recovery that can create jobs and economic transformation (JET), through a focus on public/private investments and climate finance,” says Al-Zoa’bi.

The climate action planning adopted a comprehensive set of strategic climate responses, including Jordan’s initial Intended Nationally Determined Contributions (INDC) in 2015, followed by its first NDC in 2016. Building on these efforts, and in collaboration with national and internal stakeholders, the country launched its NDC Action Plan with priority projects in 2020, with support from the NDC Partnership.

The Ministry of Environment, with support from the Global Green Growth Institute (GGGI), launched the Green Growth National Action Place (GG-NAPs) 2021-2025, which are mainly medium-term implementation plans. A majority of actions in the GG-NAPs are climate responsive and aligned with NDCs, which have a longer time frame for implementation until 2030. Through the Partnership’s Climate Action Enhancement Package (CAEP), Jordan conducted a Cost-Benefit Analysis (CBA) for 35 priority climate actions contributing to the implementation of Jordan’s NDC as previously identified by Sectoral Working Groups jointly with a climate finance strategy.

Earlier in June 2021, The World Bank Group approved a US$500 million program to catalyze public and private investments in Jordan for a green and inclusive recovery from the COVID-19 pandemic.

In this statement, World Bank Group’s Mashreq Regional Director, Saroj Kumar Jha says, “Jordan has been one of the most active and pioneering countries in the region in ratifying and adopting international climate change initiatives, including the Paris Agreement. Jordan can now capitalize on these efforts to become an attractive destination for green and climate-related investments.”

The Inclusive, Transparent and Climate Responsive Investments is part of the US$1.1 billion recently announced for Program-for-Results (PforR), through combined loans and grants, financing support from the World Bank Group and other international partners to support Jordan in responding to the pandemic and promoting an early, climate-resilient, and inclusive recovery.

According to a report by the United Nations Environment Programme, the Mediterranean region, which is home to several countries in the Middle East and North Africa (MENA), has been described as a ‘climate change hotspot’. According to the National Climate Change Adaptation Plan, climate-related hazards, such as extreme temperature droughts, flash floods, and storms, affect Jordan. These hazards are increasing in frequency and intensity over the years due to climate change.

Jordan, however, positioned itself well ahead in tackling these issues by advancing its climate policy framework under the Paris Agreement, which it ratified in 2016. Jordan was amongst the first countries to launch a Climate Change Policy in 2013 and has consistently issued its national communications under the United Nations Framework Convention (UNFCCC).

Ahead of COP26, Jordan is updating its NDC, building on a prioritization exercise conducted in 2020 in five key sectors as part of its engagement with the NDC Partnership. “The NDC Action Plan seeks to scale renewables and energy-efficient measures, adapt water, agriculture and health sectors to climate impacts, and strengthen the resilience of disadvantaged groups and vulnerable ecosystems,” says Al-Zoa’bi.

So far, cost-benefit analysis (CBA) for reducing GHG emissions and potential climate impacts have been conducted for 35 prioritized NDC actions.

“Generating new jobs while maintaining social protection is one of the main short-to-medium-term priorities, given the record unemployment that comprises almost 25% of the labor force. While existing jobs are under pressure from the tourism sector fallout, the path to recovery in international arrivals is uncertain. Increasing tax revenue is an important outcome, as both current and projected fiscal deficit levels require new sources of tax income. All of these are seen to be drivers for green recovery in Jordan,” Al-Zoa’bi says.

Jordan’s green growth pathway aims to provide substantial benefits for the country’s economy, people, and environment. This includes plans for reducing dependency on fuel imports through transformations in the transport sector. This helps to mitigate uncertain and exogenous economic shocks arising from volatility in fossil fuel prices and physical interruption supplies.

According to the Jordan Sustainable Consumption and Production National Action Plan 2016-2025, the combination of green growth and sustainable consumption and production efforts in energy, transport, water, agriculture, waste, and tourism has the potential to attract sustainable green investments amounting to 1.3 billion U.S dollars and create 51,000 new jobs over ten years.

“Jordan is updating its first NDC by raising its macroeconomic GHG emission reduction target, this forthcoming updated NDC with higher climate ambition aims at driving Jordan’s post-COVID-19 recovery process into a lower carbon and more climate-resilient development pathway steered by national green growth priorities while fully committing to the provisions of the UNFCCC and the Paris Agreement,” concludes Al-Zoa’bi.