PINTADAS, Brazil, Sep 21 2007 (IPS) - "It is painful to think that global warming will further aggravate the lack of rainfall" in Brazil’s semiarid northeast, said Luiz Tomacheski, who was stunned to see firsthand the dry landscape of twisted thorny shrubs and patches of brown grass in this region. 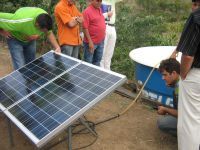 Out of a group of two dozen activists, agricultural advisers and small farmers who recently visited the small northeastern farming town of Pintadas to study a local project for adaptation to climate change and share ideas, Tomacheski, president of the Fundação Rureco, a rural development foundation in the southern state of Paraná, was the only person from that part of Brazil.

Accustomed to a rainy climate, with only occasional – "although more frequent lately" – droughts, Tomacheski felt the impact more than others when he took in the sight of the arid, gravely soil.

But he was pleasantly surprised by the high level of community organisation in the area, where local residents are facing up to the challenges, "with the sensation that they control their own destiny."

Pintadas, a town of 11,000 in the interior of the state of Bahia, was selected by the South Africa-based SouthSouthNorth network and four Brazilian and Italian non-governmental organisations (NGOs) to develop, in conjunction with the city government, a project of adaptation to climate change, producing food using drip irrigation and hydroponics.

The aim is to experiment with technologies that are applicable in the semiarid northeast, Brazil’s poorest region, which experts say will be hit especially hard by global warming.

The Pintadas Solar Project is fomenting the use of solar energy and bioenergy to mitigate the greenhouse effect by replacing fossil fuels with alternative energy sources.

The emphasis is on small-scale irrigation agriculture to boost production and food security in a region where water is the biggest problem, and one that will be accentuated by climate change, said Debora Kligerman, a civil and sanitary engineer who is a member of the SouthSouthNorth climate adaptation team.

A study carried out in 2004 found that 80 percent of the fruit and vegetables consumed in Pintadas was brought in from outside of the district, said former nun Nereide Segala, an adviser on the "solidarity economy" to the local government’s Secretariat of Agriculture and Economic Development, who is managing the project.

The low level of local food production, high rural poverty rate, and strong political leadership based on community organisation and activism led to the selection of Pintadas for the pilot project, which was visited in late August by the group of activists, agronomists, technical advisers and small farmers from other parts of Brazil.

Another aim of the project is to generate local sources of income. Every year, some 3,000 people leave Pintadas for several months to work in the sugar cane harvest in the state of Sao Paulo.

Mayor Valcyr Almeida Rios himself spent 10 years living in Sao Paulo, working at a sugar mill and with the Catholic Church’s Pastoral Service for Migrants.

The Pintadas Solar Project adopted the drip irrigation system as the most efficient low-water consumption technique in a district that has no rivers that run year-round, but where more than 60 small ponds have been built over the past few decades to store water for irrigation.

The project consists of the installation of electric water pumps powered by solar panels and connected to a drip irrigation system on local family farms.

Florisvaldo Guimaraes, a young farmer who has accumulated enough know-how to become a technical adviser to the project, uses the system to grow corn, cassava, beans, lettuce and other vegetables on his mother’s farm.

He installed the system that pumps water from a small irrigation pond to his garden, which now serves as a showcase for other farmers. He has since become the biggest local producer of mangos and jabuticaba (a native Brazilian fruit), and he also uses agricultural waste products to feed his cows and other farm animals.

Storing fodder is key to keeping up the milk production of his six cows, which can produce up to 60 litres a day when the grass is green during the few months of rain, but produce only 15 or 16 litres a day in the dry periods, he explained.

"I’m happy because Florisvaldo stayed here, and I could stay on the farm," said his 68-year-old mother Laura Mercés Guimaraes, who is grateful that her son is interested in farming and that he has learned new techniques that have boosted the productivity of their land.

Her other six children moved away to the town of Pintadas or to distant cities.

The pump, tank and irrigation pipes that irrigate gardens of up to one hectare in size cost around 2,000 dollars, but families can cut the cost if several of them share a pond.

Four other families have also benefited from the pilot project, which got underway last year. An initial evaluation will be carried out in March.

The families also planted crops around a larger irrigation pond, near the village of Raspador, where a diesel-fuelled pump was installed. "The photovoltaic panels can be stolen. Recently the panels were stolen from a nearby school," explained Antonio de Brito, one of the farmers involved in the project.

"It used to take hours to walk back and forth from the pond with the watering can; now it takes just 30 minutes to water, after you turn the pump on," he enthused.

One of the project’s ideas for the future is to produce biodiesel to run the pump.

But Valter Almeida, another local farmer, is hoping for a more immediate solution: he is waiting for his house to be hooked up to the public electricity grid next year.

His wife, Elisângela, believes the project will ensure them a better future. At the start there was little enthusiasm among their neighbours. Some complained that "they’re going to dry up the pond for nothing," she said. But now many are keen on following the example of the first families to get involved in the project, she added.

For the families who do not have access to irrigation ponds, the project offers hydroponics, a method of growing plants using mineral nutrient solutions instead of soil, based on the collection and use of rainwater. The production will be organic, or "organoponics," said Guimaraes.

The methodology used in Pintadas Solar is "to build know-how in conjunction with the family farmers," not impose on them technical assistance from outside, said Segala.

Farmers and technical advisers participating in the project were taken to visit similar initiatives in other parts of Brazil.

An intensification of the sharing of experiences and visits to other projects, especially involving agroecology and renewable energy, in northeastern states like Paraíba and Pernambuco, was one of the needs mentioned in the meeting of activists in favour of sustainable family farming held in Pintadas the last two days of August.

Some of the visitors from other areas recommended diversifying production and incorporating a range of rotating activities, such as the production of fruit and vegetables and small-scale livestock farming, to make production sustainable on each farm, without exhausting the soil.

"We are on the route to recuperating small-scale agriculture, overcoming the dominance of extensive livestock breeding that led to the devastation of the "caatinga" ("white forest" in the Tupi indigenous language), the native shrubland and thorn forest vegetation of this semiarid zone, said Guimaraes.

Any initiative undertaken in Pintadas can count on one factor that helps guarantee success: a strong network of 11 local bodies, including women’s associations, young peoples’ groups, bee-keepers, credit cooperatives and agribusiness concerns.

The Catholic Church, with its base communities, was involved in the birth of the local community organisation process three decades ago.

The city government forms part of that community. "The organised community runs this municipality," said the secretary of Agriculture and Economic Development, Bernival Epifanio, who has a background in trade union organising. That means that any project based on the local social movements will continue no matter who is in the government.

Pintadas has been governed since 1996 by the leftist Workers Party (PT) of President Luiz Inácio Lula da Silva.

Under the local PT administration, a number of social projects have been carried out in the area. Practically all of the more than 1,600 rural households in the district, for example, now have rainwater storage tanks, which have saved families hours a month of walking to often unsafe water sources to haul water.

The NGOs supporting the Pintadas Solar Project are the Brazilian groups Human Development Network and CEMINA (Communication, Education and Information on Gender), Ambiente Italia and the Cariplo Foundation from Italy, and SouthSouthNorth.

The solidarity built in the process, in which "the beneficiaries and designers of the projects are one and the same," is the engine of local development, said Segala, the 49-year-old former nun, who now has four children and has been living in Pintadas for 20 years, where she is a social activist and small farmer.

Segala is one of six Catholic nuns who came from the southern state of Santa Catarina in the 1970s and 1980s and helped turn Pintadas into an organised community that is forging a way to improving adaptation to present and future droughts.