HAVANA, Dec 26 2007 (IPS) - The veils, gloves, roses and dresses are white. Monica and Elizabeth hold hands and exchange rings on this afternoon in Cuba overflowing with symbolism, tears, laughter and hugs from people who have supported them over the last two years. 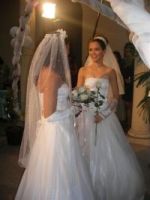 “I loved you from the moment I first saw you. You were the woman I was looking for, and I am the woman of your dreams,” says Mónica, 19, who cannot help remembering the hard times their relationship went through. “We were on the point of living under a bridge, but there were always good friends who understood and helped us.”

Elizabeth, 28, responds, moments before the ring and the kiss. “I always said that every day I discover something new about you. I’m still amazed at your attitude towards life’s challenges. I owe my strength to you. Because of you, I know where I’m going and what I want, and what freedom means. You are my bride, my friend and my lifelong partner.”

The words and images of every moment of Sunday’s ceremony were recorded on film by a team of students from the Cuban Higher Institute of Art (ISA). It is not the first symbolic wedding of a lesbian couple to have taken place on this Caribbean island, but it is the first to enjoy support from a state institution.

The National Centre for Sex Education (CENESEX), which for several years has been promoting greater understanding of sexual diversity, loaned its inner courtyard for the ceremony and the celebration that followed for 60 friends, ISA students and a handful of representatives of the institution.

“It made sense for us to open our doors for this, even though we’re not a party salon. Where better to experience such an event?” psychologist Norma Guillard, deputy head of the sexual diversity section of the Cuban Multidisciplinary Society for the Study of Sexuality (SOCUMES), told IPS.

Guillard, who also coordinates a discussion group for lesbian and bisexual women which has been meeting at CENESEX for three years now, said that opening its doors to an event like Sunday’s wedding is completely consistent with the work of an institution that “is open to understanding and to the struggle against homophobia.”

“An event will happen that will change our lives, and yours too. We invite you to take part in this revolution of love … It will become a part of history or it will just remain in your memory, it’s up to you,” said the handmade invitation on recycled paper received by IPS.

A study carried out by journalists in Cuba early this decade found that social disapproval of lesbians is far greater even than that faced by homosexual or bisexual men. Lesbians or bisexual women have greater difficulties coming out of the closet, in their families or in society, because of the traditional roles assigned to women and mothers.

Lesbians even come across incomprehension within the gay community, which is itself affected by the dominant machista culture. A man may do as he wishes with his life and his sexuality, according to many homosexual and bisexual men, but women are not accorded the same freedom.

“In the view of many young lesbian women, this is an homage to love. We are trying to raise awareness of this issue based on that which makes us most human, our feelings – in this case love,” Hanny Marín, a third year student at ISA and the director of the filming of the wedding, told IPS.

Their story began many years ago, when Monica was a little girl and Elizabeth used to visit Monica’s brother. Time passed and each went their own way, until they met again about two years ago. “I was always an open book to everyone since childhood. Elizabeth wasn’t; she was always more reserved,” said Monica.

They had to overcome obstacles and hostility. Elizabeth just told her family they were having a party. Monica’s mother helped them with all the preparations, but did not want to be there for one of the most important events of her daughter’s life. “It would have been too hard for her to swallow,” Monica told IPS.

A proposal for legal reform advocated by CENESEX and the Cuban Women’s Federation calls for the recognition of de facto unions between same-sex couples and equal rights for heterosexual and homosexual couples, as well as eligibility to adopt children and, for women, access to assisted fertilisation services.

The legal machinery is already rolling and the initiative may reach parliament in 2008, but no one can predict how long it will take to come to a vote. Meanwhile, CENESEX was advised by the ruling Communist Party to make efforts to prepare the public through a media campaign.

“This should be seen as absolutely normal. Each to his or her own. I’m heterosexual, but that doesn’t prevent me from understanding people who are different. What this couple is doing is really courageous, at the present time,” Aldo Díaz, an old friend of Elizabeth’s and best man at the wedding, told IPS.

Díaz read the “essential requirements” before sealing the union: “may you never lack the commitment, honesty, courage and intelligence to enjoy the good and accept the bad in your partner and in yourselves. From this moment you are to speak your thoughts aloud to your other half, and this is the best gift and the highest encouragement.”

“May there always be a warm kiss on your lips, a sweet and ardent look in your eyes, a gentle caress in your hands, and in your minds thoughts of affection, admiration and concern for the needs of your other half,” added the other best man at this marriage which, for the moment, requires no lawyers or legal registry.

Mónica and Elizabeth look forward to the day that their union can be legalised, but for them it will only be a bureaucratic procedure. “We’ll go and sign, and that’s all. And that day will come, because we have made great progress on these issues, in spite of the lack of understanding. We are a living example,” said Monica.