LA PAZ, May 2 2008 (IPS) - Efforts by Bolivia’s land reform authorities to free 167 Guaraní families living in servitude in Alto Parapetí, a rural area in the eastern Bolivian lowlands province of Santa Cruz, have brought to light a phenomenon that had remained largely hidden and ignored until now in the country’s vast Chaco plains region. 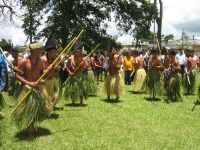 The scandal broke out a few weeks ago in Bolivia as the media began to report on the indigenous families’ appalling living conditions.

In the Chaco grasslands region, which covers the eastern and southeastern part of the provinces of Santa Cruz, Tarija and Chuquisaca and where temperatures regularly climb above 40 degrees Celsius, there are also another 1,050 families living in a kind of modern-day slavery.

A study carried out in 2007 by the German Development Service’s (DED) Programme to Foment Intercultural Dialogue in the Bolivian Chaco identified the municipalities in which the enslaved families live.

The spotlight is now focused on the municipality of Alto Parapetí in the province of Cordillera, where the government’s National Institute of Agrarian Reform (INRA) decided early this year to enforce the land reform law and recover the property of around 20 Guaraní communities, in response to a legal claim to community land presented by indigenous people in the area in 1996.

Twelve years after the Guaraní’s initial claim to their ancestral land was filed, a team of INRA inspectors is attempting to regularise land ownership and redistribute idle or fraudulently obtained land – by means of expropriation with economic compensation – in the Chaco region.

But the INRA agents have run into violent opposition from white and mestizo (mixed-race) medium and large landowners, farmers and ranchers in eastern Bolivia, which concentrates most of the country’s natural gas production, industry and gross domestic product, as opposed to the western highlands, which are home to the country’s poor indigenous majority.

The situation has aggravated the tension between the leftist government of indigenous President Evo Morales and landowners in Santa Cruz, ahead of a controversial May 4 referendum organised by the provincial government and the pro-business Santa Cruz Civic Committee, in which local residents will vote on autonomy for the province.

A special commission set up by the Chamber of Deputies last week has until Jun. 17 to carry out a fact-finding mission in Alto Parapetí to investigate the reports of forced labour and servitude, lawmaker Bernabé Paredes of the governing Movement to Socialism (MAS) told IPS.

The commission is made up of representatives of MAS and the main opposition parties.

“There is no doubt that (servitude) exists, I can tell you. I lived for 14 years in the Santa Cruz Chaco working with the Guaraní, and I became very familiar with that master-slave relationship,” Javier Guillaumet, head of Teko Guaraní, a non-governmental organisation that works with indigenous people on education issues, told IPS.

“The families there are treated as just another piece of merchandise belonging to the ‘hacienda’ (estate),” Guillaumet said by telephone from Santa Cruz. “The ‘patrones’ (owners) don’t let them grow crops for themselves or raise their own animals. If they dare raise a pig and it is found wandering around the hacienda, the patrón simply kills it, and that’s that. What I mean is that the families live under constant psychological pressure.”

Guillaumet, a former Franciscan priest, described the “captive” families as completely resigned to their situation, with no hope of anything better. Most are older people, “because the young escape as soon as they are old enough to fend for themselves.”

Those who stay rarely learn to read and write, “because when it’s time for the peanut harvest or other work, the children go to work for the patrón. Among those children there are always Guaraní Indians with blue eyes, children of the landowners of course, because they use the young girls to (sexually) initiate their sons. I’ve seen it for myself, no one has had to tell me about it,” he said.

Jesuit priest Xavier Albó, an anthropologist, told IPS that the 1892 massacre of Kuruyuki (in the province of Santa Cruz), in which nearly 1,000 Guaraní Indians were killed by the army, led to “a brutal growth of haciendas, thanks to the large numbers of captive farmhands.”

Historian Isabelle Combès, who wrote “Etnohistorias del Isoso: chané y chiriguanos en el Chaco boliviano” (Ethnohistories of the Isoso: Chané and Chiriguano in Bolivia’s Chaco Region), published in 2005, says the tradition of servitude disappeared in a number of areas as a result of the 1932-1935 Chaco War fought by Bolivia and Paraguay for control over part of the region.

“Many properties collapsed, the patrones abandoned their estates and the Guaraní continued to live in the area, as communities,” said Combés.

But in some areas, like Alto Parapetí, social relations have remained unaltered since 1850, she noted.

After a land reform law was passed in 1953 by the government of the time, in the hands of the Nationalist Revolutionary Movement, there was an attempt to enforce the law in 1957 in the Chaco, but the officials “were ambushed and killed by the patrones, so the reform was carried out backwards, by consolidating the large haciendas,” said Albó.

The book caused quite a stir and upset the local elites, said Albó

As the founder of the non-governmental Centre for Research and Advancement of Peasant Farmers (CIPCA), Albó has worked closely with Guaraní communities. In the late 1970s he found that even the “free” indigenous families were in a state of debt bondage to sugar cane growers in Santa Cruz.

“They had the obligation to go and work every year to pay off the debt. So our first task was to raise funds, give them to the Guaraní communities, who surprised the sugar cane growers by showing up and saying ‘here’s everything we owe you,’ and leaving,” he said.

In 1980, CIPCA found that the Guaraní people only had 14 percent of the land that was rightfully theirs. “That gave rise to the idea of getting more land. The initiative was mentioned to the bishop of Cuevo, Father Juan Pellegrini, who called our attention especially to the ‘captive’ communities.”

The route chosen by CIPCA was to purchase haciendas to free the indigenous people living on them in servitude.

Wilson Changaray, president of the Guaraní People’s Assembly (APG), which groups a number of Guaraní villages, told IPS that despite these and other efforts by non-governmental organisations, seven communities remain in servitude in Santa Cruz, under a system of verbal contracts and an average wage of 20 Bolivianos (around three dollars) a year.

Albó said the APG heard that 88 families had been forced to leave the haciendas where they work without pay, before the special Chamber of Deputies commission arrives.

“But they don’t want to leave because they are older, they have no other home, they have no land, they have nothing,” said Guillaumet, who is wary of INRA’s intentions. “This operation (by the land reform authorities) is political in its timing, but they have already begun, and they have to complete it. If they don’t do so now, then when?”

Bolivia’s Chaco region covers nearly 128,000 square kilometres and has a total population of 300,000, 20 percent of whom belong to the Guaraní ethnic group, says the Food and Agriculture Organisation (FAO) report Yasarekomo (Wake Up), published in Spanish in 2004.

Deputy Minister of Land Alejandro Almaráz said the Guaraní are legally entitled to around 54,000 hectares in that region.