MOGADISHU, Aug 13 2008 (IPS) - Pipes, reservoirs and water treatment plants in south and central Somalia have been extensively vandalised in the years since the collapse of Siad Barre's government in 1991. In the long absence of central authority, Mogadishu's residents have devised their own informal water distribution systems, but there are many shortcomings. 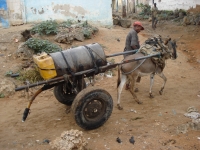 The Bimalow neighborhood, one of the few remaining populated pockets in Hawlwadag district in the south of Mogadishu, is served by a well. All the public pipes have been looted, so like other privately-owned wells in the city, the Bimalow well's management has laid a backbone of its own pipes.

The wealthier households in the area pay for additional pipes to connect their homes. Water is pumped from the well into huge tanks perched on structures above the neighbourhood, and gravity does the rest.

Amina Mohamed's family of seven is one of the lucky ones in Bimalow who have a semblance of running water in their house, but she says the service is neither ideal nor regular.

"We get the water from eight in the morning to one in the afternoon, but the problem is that the water comes directly from the well to our house untreated and is really unsafe to drink," Mohamed told IPS. "There are times when the pump at the well breaks down and we have to revert to donkey water which is less hygienic than tap water."

The "donkey water" she refers to is water from the same well, but delivered to households by donkey carts mounted with a 200 litre barrel – just enough to sustain an average Bimalow family of eight for a day or two.

Water brought by donkey carts is considered to be less hygienic because of the sometimes poor state of cleanliness of the barrels and the containers used by the donkey drivers to transfer the water from the barrel to a family’s own water storage.

Doctors say chronic diarrhoea outbreaks in Mogadishu are among the adverse effects of the untreated water used by the city's residents.

There are a number water purification plants that supply purified drinking water to those who can afford the luxury.

Several of these purification and bottling plants, including the largest, the Saafi Water Factory, have been closed due to the insecurity prevailing in Mogadishu, yet there are some plants still operating in the relatively stable and sparsely populated neighborhoods in the restive coastal capital, producing 20 litre bottles which cost around 50 cents a bottle – out of reach for all but a tiny minority in Mogadishu.

It is not clear what standards of purity this water meets, since there are no regulatory agencies functioning in Somalia.

Khalid Jamal, manager of Bimalow well, says his well serves nearly 137 households with piped water. Four donkey carts take water to the rest of the neighborhood and beyond. He says some families still depend on collecting water from the well in jerrycans.

Most wells in Mogadishu are owned by local business people who provide water to surrounding neighborhoods for profit.

The price of water has more than doubled since the beginning of the year. Yusuf Elmi remarks that water vendors explain the increases in terms of the price of fuel, but notes the price rarely goes down when fuel becomes cheaper.

"My family of eight used to rely on water fetched in 20 litre jerrycans on the heads of my wife and our daughters, but we started using donkey water since we live so far from the well. Our worst problem is not the purity of the water, but the very high cost because of the rising fuel prices."

Elmi says that his family gets by on 200 litres a day for the entire family's needs: for drinking, cooking, washing, everything. But he adds that there are relatively few donkey carts that serve the entire neighbourhood, which makes it difficult to get water regularly.

Usually families have one regular vendor who delivers water to them once a day or once every other day. Each of the donkey drivers services dozens of households. Drivers say they do not earn much, as the difference between the money they pay for a barrel of water and how much they sell it for is very small.

Elmi said that when his family runs out, like many others in Bimalow they turn to their luckier neighbours with running water. "I spend a third of the family's budget on water, but it is still not enough," Elmi told IPS.

Bimalow's small scale water system is replicated all over Mogadishu.