KARACHI, Sep 15 2008 (IPS) - Prominent civil rights activists are demanding that the government act against those responsible for the burial alive of five women in Balochistan, in July, that politicians from the province have defended as an age-old custom. 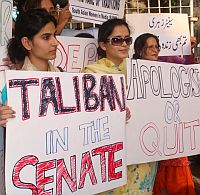 On Jul. 14, in the remote village of Babakot, 80 km from Usta Mohammad town in Jafferabad district, three teenage girls and two older women were buried alive, allegedly on the orders of Abdul Sattar Umrani, brother of Sadiq Umrani, a provincial minister belonging to the ruling Pakistan People’s Party (PPP).

According to the version released by the Hong-Kong-based Asian Human Rights Commission (AHRC), the victims were taken to Nau Abadi, in the vicinity of Babakot, where Umrani and his six companions dragged the three younger women out of his jeep and beat them up before shooting and seriously injuring them. The girls were reported still alive when Umrani and his accomplices hurled them into a wide ditch and covered them with earth and stones.

AHRC said the two older women were an aunt and the mother of one of the girls. When they protested at the treatment meted out to the girls, they were also pushed into the ditch and buried alive.

Apparently the teenagers were being punished for asking to be allowed to marry men of their choice.

When the matter was raised in on Aug. 30 in parliament by opposition senator Yasmin Shah – who accused the government of turning a blind eye to the killings – a senator from Balochistan, Israrullah Zehri, retorted: "It is part of our custom". Zehri was supported by Senator Jan Mohammad Jamali who said the incident was being ‘’unnecessarily politicised.’’

"Arguing [in parliament] that it should not be raised because in doing so tribal customs are being politicised is dishonest and contempt of the Senate and the Constitution under which it has been elected," he added.

"These beasts in human form have no place in a modern society," said Pervez Hoodbhoy talking to IPS. An internationally-known peace activist, Hoodbhoy said senators Zehri and Jamali were "Neanderthals whose mental framework is that of cavemen’’.

Samar Minallah, who has long been fighting against cruel tribal practices in Pakistan, said there are many Zehris and Jamalis in parliament who shared ‘’the same mindset that has more to do with perpetuating the status quo of powerful against weak, man against woman’’. She said the only difference was that the two legislators were honest enough to speak "their minds".

Hasan has demanded Zehri’s immediate resignation. "As things stand, he is propagating criminality in the name of tribal custom."

"By supporting the unspeakably cruel acts, they [Zehri and Jamali] have shown themselves to be violent, aggressive, and dangerous fiends who should be removed immediately from every public post," said Hoodbhoy.

"That there are people in this society who commit multiple murders and then get away with it using their political influence draws a huge question mark on our civility," said A.H. Nayyar, an Islamabad-based academician and rights activist. "Our heads hang in shame for being a part of a nation that tolerates such barbarism."

Nayyar recalled that this was not the first time such heinous crimes have been justified in the name of tribal traditions. "Some of our exalted senators from the North West Frontier Province had also justified the cold-blooded killing of a woman by an assassin hired by her parents in the office of her lawyer in Lahore." He was referring to the 1999 murder of 29-year-old Samia Sarwar, who was shot dead for attempting to divorce her husband.

Pakistan’s constitution allows a woman aged 18 and above to marry of her own free will, but in practice women are often severely punished or even put to death for straying from tradition.

According to the independent Human Rights Commission of Pakistan, in 2007, as many as 636 deaths were attributable to honour killings. Many more such deaths may have gone unreported.

Honour killings were banned in 2004 and made punishable with the death sentence, but the law is weak and culprits rarely face justice.

"He (Umrani) is going about life with the same pomp and show with armed guards surrounding him, without a fear in the world," a political worker from the Baloch Republican Party (BRP) told IPS over telephone.

Speaking on condition of anonymity for fear of reprisals, the BRP representative said: "The bodies of the three girls have been dug up and buried somewhere else so that the police cannot complete their investigation."

He also said that it was a well-known fact that Sattar had killed over two dozen people, mostly over land disputes, but no case has been registered against him. "If you think he will be caught this time, you are mistaken. This is Pakistan, the influential can truly get away with murder, not just one, but scores!" he said.