BULAWAYO, Dec 2 2008 (IPS) - Growing and selling vegetables has become a lifeline for 41-year-old Mavis Dube at a time when millions of Zimbabweans face increasing poverty and hunger after years of debilitating economic recession. 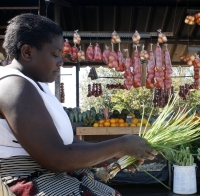 Given access to no more than water & a piece of land, a group of women is growing abundant vegetables in a Bulawayo neighbourhood. Credit: Anthony Kaminju/IRIN

Due to severe food shortages and high unemployment rates, Dube, like many other Zimbabweans, had no way of income generation and had to find a different way to feed her family. Together with nine other unemployed women, she applied to the Bulawayo municipality for a piece of land close to a council borehole.

The women now grow tomatoes, cabbages, onions, lettuce and other vegetables in a communal garden in Nkulumane, a working-class suburb in western Bulawayo. Their yields feed their families but also generate income in sought-after foreign currency, as they sell their vegetables in exchange for South African rand.

Dube is one of few Zimbabweans who can still afford to buy basic commodities, such as bread, sugar and meat. "We are not rich, but we can look after our families and feed ourselves," she said. "From what I grow here, I have been able to send my children to school and occasionally buy a loaf of bread."

Bread has become a luxury for many. A loaf currently costs about $1 – the average Zimbabwean, such as teachers for example, earns less than $10 a month.

"We sell to people who purchase in bulk. They pay us in rands and this enables us to cushion ourselves against inflation," explained Katherine Zulu, another member of the neighbourhood vegetable garden.

In addition, the women sell their produce for local currency to individual customers.

Each member of the communal garden makes about $50 per month, Zulu explained – five times the average Zimbabwean’s salary.

It has become important for Zimbabweans to earn foreign currency after the country’s Central Bank authorised retailers earlier this year to peg their goods in other currencies alongside the Zimbabwean dollar.

As a result, most goods available in the country are now priced in US dollars and the South African rand.

Whatever additional income the women generate is pooled for special bulk purchases. "With our savings, we plan to buy basic commodities that are currently not available in Zimbabwe, like maize meal, cooking oil, laundry soap and rice in bulk in South Africa," said Zulu.

The women also use the money to purchase pesticides and maintain the council borehole.

Dube and her colleagues are not the first women to start planting vegetables out of hunger. Gardening self-help projects have sprouted throughout the country, which has failed to overcome a months-old political logjam that has seen humanitarian agencies, such as the World Food Programme (WFP), estimate that up to half of Zimbabwe’s population will need food assistance in the coming year because of poor harvests in successive seasons.

Nkulumane councillor, Ralph Maweni, says he supported the gardening project because it enables women to survive in an "unbearable economic environment".

Zimbabwe currently has the highest rate of inflation in the world and, according to the World Bank, the economy has shrunk by more than 70 percent since 2000, the time president Robert Mugabe embarked on his controversial land redistribution programme.

Because of the difficult economic situation in the country, the Bulawayo municipality decided to encourage income-generating activities initiated by residents. "Such gardening projects empower women at a time that many households are failing to make ends meet," said Maweni.

The area has a history of communal gardening projects. The Bulawayo City Council has helped to set up numerous township communal gardens in the past two decades. But many of these gardens have been abandoned due to water shortages.

That’s why Dube, Zulu and eight others carefully chose a piece of land close to a borehole, which provides access to water free of charge.

To kick-start the project, the women pooled resources to purchase seedlings, gum poles and barbed wire to demarcate their garden, which now stands at about half the size of a football pitch.

"We put together 100,000 Zimbabwean dollars, which was a lot of money for us when we started late last year," Zulu said.

A few months later, the project received a financial boost from a local benefactor, Pauline Jubane, a retired primary school headmistress, who purchased seedlings so that the women could expand their garden.

Jubane says she decided to assist the women who had impressed her with their proactive resolve to find a way out of poverty and hunger. "There are very few projects where a little cash can guarantee returns on such a scale," she told IPS.

"The fact that the women are able to send their children to school and afford every-day basic goods shows that this project is bearing fruit," she added.

While the local Ministry of Women's Affairs, Gender and Community Development encourages women to be self-reliant, the Dube and her colleagues say they are disappointed they have not received any assistance from the ministry.

"With the progress we have made to far, we would be happy to be allocated more space and other inputs from government like seedlings, pesticides and fertiliser," said Dube.

At the launch of the International Women's Day commemorations in Harare in March, Minister of Women's Affairs, Gender and Community Development, Oppah Muchinguri, emphasised the importance of "the equitable distribution of national resources of the country," for the empowerment of women.

"We feel the ministry is only helping people who support political parties. They always get the land and any kind of assistance. But here we are trying to show that even with little or no help we can do something in these trying times," Zulu told IPS.