SANTIAGO, Mar 20 2009 (IPS) - Although agricultural exports are among the most productive and steadily growing sectors in Chile, rural women continue to face precarious jobs, low wages, little access to land and the growing dominance of agribusiness. 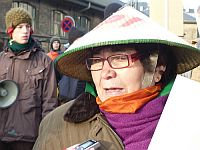 Driving south out of Santiago, the skyscrapers fade from view and the landscape shifts to one of endless extensions of vineyards to either side of the road, in a country where the food industry represents 10 to 15 percent of GDP.

Four hours later, the highway into Los Cristales, a farming town of 2,600 people located 330 km from the capital, turns into a dirt road.

In the town itself, there is only one paved road.

Large apple orchards and fields of wheat or potatoes for export, along with public offices and large houses scattered here and there give way to small family plots next to modest homes and low-income housing complexes with little surrounding land.

“It’s not easy to have a bit of land here. I have a tiny little plot,” Los Cristales resident Miriam Guzmán told IPS. “But not everyone has access to a little plot of land to grow their own crops. I was lucky to inherit.”

The land where Guzmán grows her family’s vegetables and a few crops for market is part of an inherited field that was divided between her and her three siblings. Her portion, where she grows mainly onions, potatoes and tomatoes, is 1,000 square metres in size. She is saving up to build a house with the aid of a government subsidy for rural housing.

“It’s not even big enough to raise some livestock. My siblings already have their homes. But since I don’t have mine yet, I’m taking full advantage of the land in the meantime, because when I build my house, the land area is really going to shrink,” said Guzmán.

Lack of access to land is especially a hurdle for women. The Food and Agriculture Organisation (FAO) stresses the urgent need to provide equal access to land in order to strengthen global food security.

Lack of security in terms of land tenure, ownership or use is one of the main obstacles to an increase in agricultural productivity and income for rural women, says the United Nations agency, whose regional office is based in Santiago.

The National Association of Rural and Indigenous Women (ANAMURI), which groups around 10,000 women farmers, says the Chilean state has yet to respond fully to their demand for equal access to land and for solutions to the specific social and economic problems they face.

“Very little land is in the hands of small farmers, because they were driven under during 17 years of dictatorship,” the president of ANAMURI, Alicia Muñoz, told IPS.

Muñoz pointed out that the 1973-1990 dictatorship of General Augusto Pinochet rolled back the redistribution of land that had been carried out under an agrarian reform programme by the government of president Salvador Allende (1970-1973), after the socialist leader was overthrown by Pinochet.

Today, nearly 19 years after Chile’s return to democracy, most of the country’s farmland is in the hands of agribusiness interests.

The process was described as the “empresarización” (roughly, the “businessation”) of the Chilean countryside, in an “analysis on the ownership of agricultural land from a gender perspective”, drawn up by the Agriculture Ministry’s Office of Agrarian Studies and Policies (ODEPA).

Although only 11 percent of all rural properties are owned by the business sector, 64 percent of farmland in Chile is in the hands of private companies.

The distribution of land is determined by the market in this South American country of 16.5 million people, where only 13 percent of the population is rural.

Since it was adopted by the dictatorship, the neoliberal free-market model has prevailed in Chile, say analysts.

In an interview with IPS, Alfredo Apey, head of agrarian policies in ODEPA, said “many companies have acquired land and are getting involved in agribusiness: vineyards, fruit exporting companies, and limited liability companies…which is not necessarily good or bad.”

The problem, he said, is when companies, which are more efficient in terms of productivity and production, crowd out small farmers and leave them with less and less land.

And that is precisely what small farmers are worried about, especially in the face of a global economic crisis whose impact on a sector that is highly dependent on exports has just begun to be felt.

The debts that built up last year as a result of harvest loss caused by severe drought could be compounded by new debts that will ultimately drive more small farmers off their land.

In that case, “it has a negative effect from the cultural point of view,” because it affects social and economic equilibrium and fuels the rural exodus to urban areas, said Apey.

Seventy-five percent of the owners of family farms are men and only 25 percent are women, who own just nine percent of Chile’s farm and forest land.

The inequality in the distribution of land has not changed in the last 10 years, said Apey.

Associations of women farmers complain that this inequality is rooted in a patriarchal culture and that the state has done nothing to generate more equal access to land.

Although ANAMURI says Chilean governments have favoured agribusiness over small farmers, the group acknowledges that President Michelle Bachelet, in office since March 2006, has at least expressed concern over the situation of rural women.

For his part, Apey pointed to several government initiatives aimed at eradicating gender inequality, such as measures to improve women’s access to credit and to irrigation and forestry programmes.

He also mentioned policies like government purchases of land to restore the property of indigenous communities, and initiatives to help the rural population stay on their land and continue to carry out their traditional activities.

“For us it is important, not only to recuperate land, but to keep people, especially the smallest-scale farmers, from losing their property as a result of the inequalities of the productive processes,” said Apey.

“That is why there are credits and development and technology transfer programmes to support families” who depend on small-scale farming for a living, not only to help them continue to practice subsistence farming, but to strengthen and expand their activities, he added.

ANAMURI’s Muñoz recognised the advances made by the Bachelet administration, including measures like providing training for rural women, but was critical of the government when it came to the question of access to land and support for small-scale farmers.

“The government supports big business, which does not care if it goes bankrupt today or tomorrow, because the government will come running to bail it out,” she said.

By contrast, “small farmers who own half a hectare of land are not subsidised,” even though they are most vulnerable to the phenomenon of climate change and to price swings, she added.

Guzmán from Los Cristales agrees that greater facilities are available to those who own more land. “But then they start suffering losses. So women, for example, do not dare to get into debt, because the products used here in the countryside are extremely expensive, and if you have a bad season you end up indebted more than ever,” she said.

Chile is seen as an example of macroeconomic stability and social advances. But for women in rural areas, the statistics are much less impressive.

The poverty rate in Chile dropped from nearly 40 to 13.7 percent between 1990 and 2006, in both urban and rural areas. But the National Women’s Service reports that rural women are among the most vulnerable social groups, as are female heads of households.

According to researchers at the Latin American Centre for Rural Development (RIMISP), it was not the agricultural growth of the last 15 years that brought down rural poverty levels in Chile, but the diversification of work in the countryside.

The reduction of rural poverty was largely due to the diversification of income, by means of non-agricultural jobs, alternative income-generating activities, and government assistance, RIMISP reported in 2008, in a study on the “agricultural boom and persistence of rural poverty”.

Last year, forestry and farm exports grew 23 percent, to total earnings of 8.4 billion dollars, in a year when exports overall expanded just 0.2 percent, and even fell by eight percent in some industries.

But rural women did not share the benefits of the boom. In fact, their wages have not grown in 20 years, ANAMURI reports.

Female rural workers earn 67 to 150 dollars a month – far below the official minimum monthly wage of 265 dollars. In addition, most of them work at least part of the time in the informal sector, without job contracts, health coverage or payments into the social security programme.

“I work for a small farmer. Right now I am harvesting beans from Monday through Saturday, for eight hours a day, from eight in the morning to three in the afternoon,” Guzmán told IPS.

She earns 10 dollars a day – 240 dollars a month. But that is only during harvest time, from November to March.

“This work is really bad for women,” said Guzmán. “It’s really hard, heavy work. Generally you work in large fields, or for companies. And it’s bad, because the season is short and if you don’t take advantage of it, winter comes and there is no work.”

She gets by the rest of the year working as a domestic in nearby towns, where she earns even less.

The vegetables she grows feed her family and earn her “a few pesos” on the market, says the 32-year-old Guzmán, whose partner is unemployed and who wants to build a house before they have children.

Muñoz said that in ANAMURI’s view, it is the agribusiness and agroexport model that has devastated the countryside and reduced the number of small farmers.

The solution, she said, would lie in a change of model, in order to enable traditional family farmers to help design their own farm and food policies, to move towards food sovereignty, and to underscore the need for a land reform programme once again.

“The current model does not favour small-scale production or distribution of food; on the contrary it destroys the environment, generates labour precariousness and devalues agricultural labour and the work of rural women,” said Muñoz.