SANTIAGO, Apr 2 2009 (IPS) - The debate on the decriminalisation of therapeutic abortion has been revived ahead of the December presidential elections in Chile, one of the few countries in the world where abortion is illegal even under extreme circumstances, such as risk to the mother's life or a severely deformed foetus. 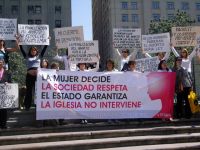 Nevertheless, tens of thousands of Chilean women resort to illegal abortions every year. A number of reasons lie behind each woman’s decision to terminate a pregnancy, as several women who have had abortions described to IPS.

One of them, Paz, had just separated from her husband when she found out she was pregnant three years ago.

"He was the absolute worst, I didn’t want to have his child," said the 32-year-old victim of domestic abuse, who asked that her real name not be used.

She paid more than 950 dollars for a vacuum aspiration abortion at an illegal clinic when she was seven weeks pregnant.

"I have never felt guilty about it, although I do think it is always a tough decision, even if you are really sure," she said.

Now happily eight months pregnant with her new partner, she stressed that "I always meant to become a mother."

"I know dozens of cases where having an abortion has been a traumatic experience because economic difficulties, for example, have led women to try less safe methods," said Paz. "I had support, money, everything I needed to do it safely. Other women aren’t that fortunate."

No one in her family knows she had an abortion. "Nor does my current partner, and I don’t think he needs to know. My ex-husband never found out either; for me his opinion was irrelevant."

Therapeutic abortion was legal in Chile from 1931 to 1989, when it was banned by the government of late dictator General Augusto Pinochet (1973-1990).

The ban remains in place 19 years after the return to democracy, and abortion is punishable by three to five years in prison for the woman who undergoes it and by slightly shorter sentences for the medical professionals or others who perform the procedure.

Abortion is illegal under all circumstances in only a few countries: Chile, El Salvador, Malta, Nicaragua and the Philippines.

The reinstatement of therapeutic abortion, a demand that has been voiced constantly by women’s organisations since the restoration of democracy, has so far not made it onto the agenda of the centre-left Coalition for Democracy governments that have ruled Chile since 1990.

The main cause of what women’s rights activists call the failure to pay a debt to democracy for Chilean women is the staunch opposition by the Christian Democracy Party. Not even socialist President Michelle Bachelet has managed to convince that co-governing party to take a more flexible position.

That is why women’s groups have reacted warily to the recent statement by former president Eduardo Frei (1994-2000) – who hopes to be nominated by his party as a presidential candidate – on the need to "open the debate" on the question of abortion.

A group of organisations immediately demanded that abortion not be used as an election issue.

Influenced by the leadership of the Catholic Church, which condemns abortion under any circumstances, the right-wing opposition alliance has already slammed the door on any possible discussion of the issue.

In the last 19 years, none of the draft laws in favour of the partial decriminalisation of abortion has made any headway in parliament. The latest initiative was blocked in 2007.

There are only rough estimates on the number of abortions practiced in this country of just over 16 million people. The Health Ministry referred IPS to a study by researcher Mónica Weisner, who puts the number at 120,000 a year. Other reports talk about 160,000, which would be one of the highest rates of illegal abortion in Latin America.

The estimates are extrapolations based on the number of women hospitalised for miscarriage or abortion in the first five months of pregnancy, as registered by the health system. In 2006, the total was 23,052 cases.

Both miscarriages and voluntary interruptions of pregnancy are included in that figure, as patients do not admit that they had an abortion. Many back street abortions lead to complications, which land women in the hospital.

"In countries where abortion is illegal, it is estimated that for every case of hospitalisation related to abortion, there are five cases that do not lead to hospitalisation," wrote an expert on the issue, Dr. Enrique Donoso, in an article published in 2008 by the magazine of the Chilean Society of Obstetrics and Gynecology.

But although around one-third of pregnancies apparently end in abortion in Chile, there are few deaths related to that cause, said the gynecologist. According to figures from the National Institute of Statistics, the abortion-related maternal mortality rate was two deaths for every 10,000 live births in 2000 and 1.4 per 10,000 in 2005.

"It is difficult to draw a profile of a typical woman who aborts, because the women come from all social strata and all educational levels, and range in age from 12 to 50," Gloria Maira of the Chilean Network against Domestic and Sexual Violence, which published a study last year on abortion and sexual violence, told IPS.

"What predominated in the 1960s were poor, married women who already had several children. But in the 1980s, Mónica Weisner found cases of women who were not necessarily in a relationship, and who had never had a child," she said.

The only difference, said Maira, is that wealthy women generally have greater access to sex education and birth control, and can afford to have safe abortions at clandestine private clinics – the existence of which doctors themselves admit to – or abroad.

MULTIPLICITY OF REASONS BEHIND EACH CASE

Nelly Lizama, a 63-year-old Catholic, never questioned her decision to terminate her second pregnancy. She was 16 and already had a young baby when she went to the family gynecologist. She never knew exactly what procedure was carried out, but she felt relief when it was over.

Back then, abortions were referred to merely as "remedies," said Lizama. "They were very common, because of the scant knowledge that women had of birth control methods," the mother of four sons told IPS.

But Cristina de la Sotta, executive director of the Fundación Chile Unido (United Chile Foundation), an independent private organisation that supports women with unwanted pregnancies or who have had an abortion and regret it, told another story.

The women who come to the Foundation for help were unable to get over the impact of having an abortion, de la Sotta told IPS.

"They tell us the abortion was a solution, but a bad one," she said. With the Foundation’s support, many pregnant women decide not to terminate their pregnancies, because they discover that the feelings behind maternity and motherhood run deep, she added.

Nevertheless, she believes abortion "should not be a crime for the woman involved," because "she is a victim of circumstance, rather than a perpetrator, harbourer or accomplice," and needs support.

The decision to have an abortion is not easy for anyone, said de la Sotta.

"I was 14, in the first year of middle school, and had a boyfriend who was my first sexual partner," Tamara Vidaurrázaga told IPS, describing her first pregnancy, which occurred nearly two decades ago.

When her parents found out, they decided that she had to abort. "I wasn’t thinking clearly, I was really scared," she said. But she clarified that she never felt pressured by her parents. On the contrary, she is tremendously grateful for the support they gave her.

"I didn’t have any doubts. My family isn’t religious, and I have never felt that Catholic sense of guilt or the belief that I should sacrifice my life because there is a god that wants that," she said.

The procedure, carried out at the eighth week of pregnancy by a gynecologist the family knew, cost 500,000 pesos (equivalent to around 870 dollars at the time), she said.

"The clandestine nature of the whole process is what makes abortions so unpleasant, not the decision itself," said Vidaurrázaga, who has a daughter "who was wanted and hoped for, who I adore and who is the centre of my life today."

The timid electoral debate on therapeutic abortion that is emerging in Chile involves politicians, doctors, and religious leaders, most of whom are men, and is limited to cases of women at risk of losing their life – for example, cases of ectopic pregnancies (when the baby develops outside of the uterus).

Surveys show that a majority of Chileans believe therapeutic abortion should be legal when the mother’s life is at risk, the pregnancy is the result of rape, or the foetus is severely malformed.

The other reasons that women cite for having abortions have been ignored.

"The debate has been mediocre, short-sighted and small-minded," said Maira.

WHO BENEFITS FROM THEIR PAIN?

Midwife Pamela Eguiguren, who holds a master’s degree in public health and is a researcher at the University of Chile School of Public Health, recently completed a study on pregnancies involving foetal anomalies that are incompatible with life outside the womb, like anencephaly (a condition in which most of the foetus’s brain and parts of the skull are missing). The study was carried out jointly with two women’s organisations.

"We ran across extremely painful experiences, with a health system that reacts in a very slow, clumsy manner, because there are no protocols for these cases. The care that is received depends on the sensitivity of the doctor," Eguiguren told IPS.

The nightmare that these women go through starts when the foetus is first diagnosed as anencephalic. Instead of enthusiastically shopping for baby clothes and furniture, they have to arrange for a spot in the cemetery because they have no choice but to carry the pregnancy to term, she said. Many fall into depression or develop other psychological problems. Some decide never to get pregnant again.

In the end, some try to draw some meaning from the process and salvage some positive aspect that might help justify so much suffering, said Eguiguren. For example, they say it was good to be able to hold their babies before they died, which generally occurs shortly after birth.

"There are many women who have had an abortion and were not marked by it. But going through an entire pregnancy carrying a foetus that is incompatible with life outside the womb – that is something you remember forever," she said.

It is legitimate for some women not to choose to abort in these cases, she said. "But to me it seems like torture to force someone to carry the child, when they don’t want to go through with it. You wonder who gets anything out of their suffering. And who is there to give them support? Who is there to give them economic assistance?"

Maira is convinced that if Chile does not make an effort "to be a better informed society," more open-minded and with more sex education and more widely available birth control, the number of abortions will not go down.

"We need public debate, in which women do not have to feel guilty or stigmatised for speaking up," she said. "Women’s voices are not respected today. Whatever we say, we don’t exist."