PORT-AU-PRINCE, Jul 8 2009 (IPS) - In the shadow of the Eglise Sainte Claire in the Petite Place Cazeau neighbourhood of Haiti’s bustling capital, Frantz Saintil is visiting his daughter and reflecting on the more than two decades he spent abroad before finding himself back in his native country of Haiti seven years ago. 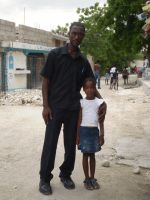 Frantz Saintil, who was deported back to Haiti after more than two decades in the U.S., and his daughter. Credit: Michael Deibert/IPS

“It didn’t take me long to become very Americanised,” says Saintil, 34, who left Haiti for Canada and eventually the United States with his family when he was six years old.

“I like baseball and apple pie and everything American. I didn’t want to be identified as Haitian and discriminated against. I didn’t understand their way of dress, their musical preferences. I was more into rock, some R&B, country music. I didn’t identify with them at all.”

Saintil is one of 3,250 Haitians that Department of Homeland Security figures show were deported from the United States back to Haiti on the basis of criminal convictions between 1997 and 2005. A soft-spoken man who was a permanent legal resident when a nolo contendere (“no contest”) plea to an assault charge in Colorado landed him in prison at 19, after serving his sentence Saintil was subsequently deported to Haiti, a country he barely knew.

“When you don’t identify yourself as an immigrant or a foreigner, it’s when you get in trouble that all these things come to fruition,” says Saintil of his experience with the U.S. justice system, speaking a measured, American-accented English in contrast to the boisterous Kreyol being shouted at a nearby football match.

“When you realise that you’re detained to be deported, then you start to identify (as Haitian), at that point you can’t deny it,” he said.

Saintil is not alone. A recent study by the 15-member Caribbean Community (CARICOM) found, upon analysing deportation data from Guyana, Jamaica, and Trinidad and Tobago, that almost 30,000 criminal offenders had been deported to those countries between 1990 and 2005.

Even more strikingly, according to migration data in El Salvador, between 2006 and 2008 some 14,608 deportees with criminal records were sent back from the U.S. to the Central American country of 7 million, home to such transnational criminal syndicates as the Mara Salvatrucha and a nation with one of the world’s highest homicide rates.

It is thus a delicate issue, with deportees who have left their birth countries at very young ages – and having become culturally and linguistically American – being digested through the U.S. prison system and then spit out to their familial homelands only to confront a wall of mutual misunderstanding.

According to figures supplied by the Centre Oecuménique des Droits de l’Homme (the Ecumenical Centre for Human Rights or CEDH), a Haitian human rights group, the average age of deportees when they left Haiti was between four and seven years old.

Having become assimilated in the United States, deportees suffered severe culture shock when returning to Haiti, where a lifestyle unfamiliar to most is expressed in a language that only a few had been able to master with any degree of proficiency while abroad.

“What we request from the authorities of Canada and the U.S. is to take into account the family factor when considering the nature of the delinquency which leads to the decision of deportation,” says CEDH’s director, Jean-Claude Bajeux. “And it is essential that the governments involved in a policy of returning people to Haiti make an evaluation of the precarious situation in this country.”

Add to the mix Haiti’s dire economic condition – with 80 percent of the population living under the poverty line and GDP per capita of just 1,300 dollars per year – and periodic political unrest that sees politicians only too willing to use pools of jobless young men as muscle in the country’s political wars, one quickly sees how the deportees, or dp’s, as they call themselves, marked with the stigma of forced exit from a country that many Haitians regard as the promised land, have a tough row to hoe once they step off the plane in Port-au-Prince.

In December 2006, for example, with no hard evidence supporting his claim, then-Prime Minister Jacques Edouard Alexis blamed deportees from the U.S. for helping to spur the country’s at-the-time spiraling kidnapping rates. The fearsome reputation of such gangs as Florida’s Zoe Pound, a Haitian-identified clique that specialises in robbing drug dealers of their product and money, often with extreme violence, only adds to the trepidation with which local Haitians view the deportees.

It is a reputation that some among their number feel is undeserved.

“If there was a way to integrate us into society, it wouldn’t be such a hardship on us,” says Junior Telusca, who moved with his family to Florida at age three and was returned to Haiti after doing two years in prison on a drug conviction. “There’s only one thing I want, and that’s to integrate into this society, to get a job, pay for my child’s school and live my life.”

Deportees often mix a certain wistfulness for the land they have been exiled from with a stated desire to try and gain some sort of advantage, both spiritual and material, from their particular status. In recent years, local organisations such as the Fondation haïtienne des familles des rapatriés have attempted to build some sort of solidarity among the newly-returned.

In tandem with Haiti’s Ministry of Social Affairs and Ministry of Interior, the International Organisation for Migration has recently developed a program focusing on deportee reintegration into Haitian society that focuses on such aspects as micro-enterprise support and language training.

But for many, it has been anything but an easy lesson.

“Life in the States is great, in all senses of the word,” says Frantz Saintil. “But if you get a second chance to be free, then you’ve got to make the best of it. If I can affect the life of even one person, even it is by teaching them English, to me that is a big step. There is no telling what that person might become.”

“And I am hopeful that one day I will get to see the United States again,” he added.

*Michael Deibert is the author of Notes from the Last Testament: The Struggle for Haiti (Seven Stories Press).