MEXICO CITY, Aug 7 2009 (IPS) - Tequila, part of the national identity of Mexico, is invariably present at family celebrations and national holidays. But many are unaware of the bitter taste the tequila industry leaves in the water and soil. 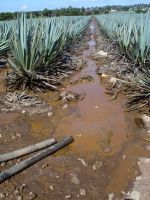 About 38 percent alcohol (76 proof), tequila is the product of the fermentation and distillation of the blue agave (Agave tequilana Weber), a plant native to Mexico that has thick, spiky leaves that can grow to over two metres in length.

Among the more than 200 agave varieties in this country, blue agave is the best for making tequila. Its Latin name refers to German botanist Franz Weber, who classified it in 1902.

The agave is grown in 180 municipalities in the western states of Jalisco, Nayarit and Michoacán, the central state of Guanajuato, and Tamaulipas in the east. This is the territory of the Tequila Denomination of Origin, established by the government in December 1974 to ensure the validity and quality of the liquor.

Mexico has 118 tequila factories and 715 brands. In Jalisco alone, considered the birthplace of tequila, the industry employs 38,000 people. From January to April, the factories produced 48 million litres, with about 40 million to be sold in Mexico and the rest for export.

But Mexico’s tequila tradition and the tequila industry have environmental costs, particularly for water and the soil.

One litre of tequila requires an input of at least 10 litres of water. However, the negative effect does not lie in the volume of water, “but rather the fact that the water is unlikely to be treated and will be discharged as industrial waste, in the ground and into streams and rivers. It is polluted water that goes on to pollute more water,” José Hernández, a researcher with the University of Guadalajara and member of the Mexican Academy of Sciences, told Tierramérica.

For every litre of tequila bottled, the process generates five kilograms of agave pulp and seven to 10 litres of distillation waste, or “vinaza”.

“The vinaza is acidic, it has an oil that makes the soil impermeable, and is hot when it is dumped. The acid is not recommended for agriculture; it should be neutralised. The oil makes the soil hard so it is useless for farming. And where the ground cracks, the vinaza filters into underground water sources,” explained Hernández.

The indigenous peoples who lived in the region before the arrival of the Spanish Conquistadors revered the agave for its many benefits. The plant represented Mayahuel, the Nahuatl goddess of fertility, whose 400 breasts were believed to feed an equal number of children.

As a distilled beverage, tequila emerged in the 16th century from the combination of the native raw material and a fermentation process introduced by the Spaniards.

Eight years after planting, the blue agave is ready for harvest. Its leaves are removed in order to extract the “piña”, or heart of the plant, from the ground.

The pineapple-shaped hearts are set to bake 50 to 72 hours in brick ovens or steel tanks. The hearts soften and release the sugars used for fermentation.

In the fermentation process, the sugars are mixed with leavening, converting them into alcohol. The liquid is distilled twice, generally in stills made of copper or steel. The result is tequila, which can then be aged in oak barrels – “añejo” on the bottle’s label indicates it has been aged.

In 1996, the Secretariat (ministry) of Environment and Natural Resources introduced standards for the degree of toxicity permitted in the waste and vinaza, which were to be adopted by the tequila industry in 2000. But none of the distilleries comply with all of the rules.

According to the Jalisco State Environment Secretariat, only one of the 67 tequila factories there complies with the law on discharge of waste into rivers and lakes.

In 2007, the authorities conducted 197 inspections, found irregularities at 51 distilleries, and shut down two of them.

Due to increased tequila consumption within Mexico and abroad, the cultivation of blue agave has expanded to other regions.

“They are growing in a protected forest, invading several hectares, where they have replaced the encino trees,” said Adriana Hernández, an activist with the non-governmental Save the Forest Committee, dedicated to protecting El Nixticuil forest.

El Nixticuil, declared a protected area in December 2005, extends across 1,850 hectares in the Jalisco municipality of Zapopán, 550 km from the Mexican capital.

The tequila industry has taken slow steps towards recognising its responsibility for the pollution. Some distilleries are neutralising the acidity of the wastewater, and cool down the vinaza before discharging it, while producing compost from the agave pulp.

Two vinaza treatment plants are slated to begin operating in 2010.

In Hernández’s opinion, there is no single solution to the environment problem. “The most common now is composting. In addition, they are trying to remove the oil coming from the cooked agave before distilling so that the vinaza is more environmentally friendly,” said the researcher.