KAOLACK, Senegal, Nov 3 2009 (IPS) - Farmers are complaining about a lack of technical assistance and the poor quality of seeds they’ve planted this year in the Kaolack region, Senegal’s groundnut-producing area, 200 kilometres south of the capital Dakar. 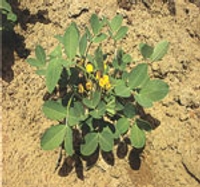 New varieties of groundnuts that are suited to the local soil and climate are part of arresting falling production. Credit: ICRISAT

The production of groundnuts, Senegal’s third-largest export product after fishing and phosphates, is in freefall. The 2008 harvest fell by over 47 percent, according to the most recent report of the groundnut producers’ association, the Cadre de concertation des producteurs des arachides.

According to the report, groundnut prices are increasingly tight in Europe, its main market. Drought and soil degradation – too severe to be corrected by applying fertiliser – are the root causes of Senegal’s agricultural difficulties.

Samba Ka, regional head of the National Council for Dialogue and Cooperation of Rural People, says if the countryside is plagued by problems, the fault lies with farmers who expect government assistance for everything.

“Farmers in Senegal have failed to instill a love of the land and an appreciation of livestock in their children. The earth is not tilled, it is scratched at. Livestock is no longer looked after, it is merely used,” he explains to IPS.

Ka however acknowledges the urgent need to put in place new agricultural policy addressing the supply of quality seeds, which would be reviewed every four years. He also recommends providing basic varieties of peanuts, millet, sorghum, maize and good quality fertiliser to smallholder farmers at subsidised prices, as well as new farming aids.

Visiting millet, maize and groundnut fields in Thiaré, not far from Kaolack, IPS found that some crops have not benefited from technical support, thereby compromising yields.

Malick Seck from the Senegalese Union of Farmers and Vegetable Market Gardeners, says farmers do not have good seeds to sow this year.

“The state no longer helps us; the seed we received this year is not good and furthermore, there was no support. As small farmers, we go into debt to buy pesticides. After the harvest we pay the money back, but more often than not, problems arise when the harvest is not good,” he laments.

Thiaré farmer Habib Ndiaye is more concerned with the sale of farm produce after harvest. “We are being forced to sell our harvest at low prices in the weekly markets. We just end up in deeper debt,” he tells IPS.

To help small farmers, the World Food Program (WFP) on Oct. 7 launched a “food facility” programme. This programme has a funding of 22.6 million dollars from the European Union and will help keep vulnerable small-scale farmers in Senegal afloat.

According to the WFP’s West Africa regional director, Thomas Yanga, the programme will help small-scale farmers boost production and improve food security. He says it is a “mission of food security and social welfare.”

According to the Association for the Promotion of Development (ASPRODEB), a programme to rebuild stocks of quality seed has been in place since last year and is running in most areas of the groundnut basin. Based in Dakar, ASPRODEB is an association working in private partnership with the ministry of agriculture.

“The Senegalese government, alongside its development partners supports groundnut producers in the Senegal River valley,” says Cheikh Fall, a member of ASPRODEB’s board.

“It seeks to ensure the availability of 79,000 tonnes of groundnut seeds before December 2010 – and these must be certified N2 seeds (new varieties suited to the local soil and climate),”

According to Macoumba Diouf, director general of the Institute of Agricultural Research based in Dakar, there is a research programme for the diversification of certified seed for cultivation in Senegal. The programme seeks to revive traditional farming practices around food production, which have either been lost or not used in 30 years.

“The programme will permit producers not only to continue using the seed and other resources they are accustomed to, but offers smallholder farmers the possibility of a higher yield – estimated at five to six tonnes per hectare in research station conditions, or between 500 kilos and 1.5 tonnes per hectare in the field.”