GURUVE, Zimbabwe, Nov 12 2009 (IPS) - Last season, for the first time in her more than 20 years as a farmer, Elizabeth Runema harvested her maize crop at the beginning of February. 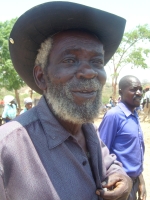 Many farmers get a first harvest in February, but for Runema this was never possible because she had no way to plough.

“I used to rely on other people’s cattle for draught power, and I never got to harvest on time,” Runema told IPS.   “I always failed to benefit from the first rains because those with draught power would still be busy and could only lend me their livestock and equipment when they had finished ploughing their own fields.”

As a result, Runema’s field was always planted late. Given that Guruve is among Zimbabwe’s driest districts, by the time she finally planted, it would be too late to beat the beginning of the dry spell. As a result, her crops always stunted.

She still does not have oxen of her own for ploughing. But she no longer needs them.

“These days I use zero tillage, and I am getting much more yield than I ever used to get when I used to rely on other people’s draught power,” she told IPS.

The 62-year-old Runema is among 775 communal farmers from Ward 5 in Guruve, a dry district in the Zambezi Valley in Zimbabwe’s Mashonaland Central province who received seed and fertiliser from the United Nations Food and Agriculture Organisation (FAO) through the European Union Global Food Security Facility Scheme. It is part of a global effort to assist developing countries to rapidly overcome food insecurity.

As part of the humanitarian community’s response to revive agriculture and food security in Zimbabwe, 176,000 smallholder farmers nationwide will receive inputs for the 2009/2010 summer cropping season from FAO under the EU Food Facility. Of these, 10,000 are in the 13 wards of Guruve District.

The primary result is increased yields, but there are many more benefits – among them efficient use of seeds and fertiliser, water harvesting and preservation of the environment.

During the days when farmers relied on draught power, men dominated crop production. But now the tables have turned.

“We have not really carried out a detailed assessment, but I have noticed there are now many more women farmers than men,” said Judas Phiri, a senior supervisor at the Sustainable Agriculture Trust (SAT), a non-governmental organisation that is distributing the inputs on behalf of the FAO.

“If you look at our agriculture, it is mostly women who do the bigger part. It is just our cultural beliefs that make it seem only men can be good farmers, but if you look at what is happening on the ground, it’s the other way round.”

During the dry season, conservation farmers dig small holes. They then put small portions of fertiliser into each hole, and once the rains come, they just plant.

“Right now I have done more than 12,000 holes. If the rains do not come this week, I will clock 15,000. That means I will be ready to plant 15,000 maize plants from the first rains. If the fertiliser is not enough, I will supplement with manure,” said another farmer, Castina Chigonyeka.

According to Phiri, tillage directly affects water retention and infiltration.

The new method has also reduced the workload for farmers. In the past, Runema always had a tough time clearing plant remains from the previous crops.

“The easiest thing would be for us to burn the residue (stalks), but we were told that this could make our area drier in future years. Now I no longer worry about removing the residue, I just leave it to rot in the fields and it boosts the fertiliser,” she told IPS.

While the farmers believe the new programme is the best for their circumstances, they believe it still has some gaps that need to be addressed.

“They should also provide top dressing fertiliser, because most of us still face many challenges accessing it,” said Dorica Tsongoro, another farmer.

The farmers have so far received 50 kilogrammes of Compound D fertiliser, which is applied to the soil before planting, and 15 kilos of open-pollinated seed maize, which are easy for farmers to recycle.

Phiri said this is part of their strategy to ensure that all the inputs are not diverted to other uses. If they give the farmers top dressing fertiliser before planting, some could sell it.

“This actually helps make the farmers more effective and responsible,” said Phiri. “We only give inputs to farmers who have prepared holes, and this makes it difficult for anyone to sell the seed or fertiliser after working so hard preparing the holes. We are still putting in place other mechanisms to ensure the inputs are properly and responsibly used.”

For the younger farmers, the programme is an opportunity to prove that they can also do better.

“I have prepared holes in one and half acres where I will plant maize,” said Edward Banda, 25. “I have another two acres where I will put beans and other crops. For me, this is a chance to prove that being young does not mean one cannot be a farmer.”

And for the older ones, it is a chance to prove that age is nothing but a number.

“I can do things at my own pace, and by the time the rains come, I would have covered some ground,” said 74-year-old Mukambi Chimanikire, a village head.

“When the programme started, the village was in immense hunger and we had run out of options on how we will get out. Many people did not have cattle for draught power, and there were slim chances of getting tractors from government. People no longer come to complain that they have nothing to draw their implements.”