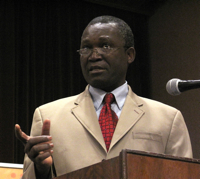 Bunmi Makinwa: Women must be included at all levels in responding to climate change. Credit: Nastasya Tay/IPS

The report emphasises that climate change is more than an issue of energy efficiency or industrial carbon emissions; it is also an issue of population dynamics, poverty and gender equity.

Poor and vulnerable populations the world over are the ones who will be hardest hit by climate change, despite their comparatively minute contribution to our global carbon footprint – the poorest billion people on Earth contribute a mere three percent of the world’s total carbon footprint.

The UNFPA’s report, subtitled “Facing a changing world: women, population and climate”, attempts to move the focus of climate change debates away from the ‘what’ and the ‘where’ to the ‘who’.

The report finds that members of poor households are especially vulnerable, as many live in rural areas and depend on the land and sea for their livelihoods. Their scant income provides little security to protect them against threats from changing conditions, and limited access to health services.

Bunmi Makinwa, director of the UNFPA regional office for Sub-Saharan Africa, spoke to IPS about three challenges likely to exacerbate the effects of climate change for African populations.

He noted that Africa is home to a large proportion of the world’s poor and vulnerable – who are likely to be worst affected by climate change.

Adding to the strain, he said, “Africa has many other problems that it is forced to grapple with, including HIV/AIDS, a lack of industrialisation… and will require more resources to tackle climate change challenges.”

Thirdly, Makinwa identified the disparity between men and women as being more acute in Africa than in some other parts of the globe. “Special attention needs to be paid to issues of gender… Women have the potential to make an enormous contribution. They must be consulted and made part of the discussion.”

Of the poorest and most vulnerable, those who will bear the greatest climate burden are women.

Why? Women comprise the majority of the world’s farmers, and have access to fewer income-earning opportunities. They manage households and hence, have limited mobility, making them more vulnerable to natural disasters.

Women are on average poorer, they have less power, less recognition of their economic productivity and shoulder a disproportionate burden in reproduction and child-raising.

Although they may be hardest hit by climate change, women also represent a crucial part of the solution. The U.N. Framework Convention on Climate Change (UNFCCC) Secretariat has stated that “Women are important actors in ensuring their communities’ ability to cope with and adapt to climate change. They can be effective agents of change and are often the ones turned to in times of need and can play a role in crisis situations.”

UNFPA’s report concurs. Slower population growth, it says, may assist with the task of bringing global emissions into balance, and enable more immediate adaptation to change already under way.

Women again play a key role here – and the report goes on to argue that if needs for voluntary family planning and reproductive healthcare are met, population stabilisation will occur naturally, without coercion or control.

The World Bank in a 2007 paper noted that the poorest women and couples are the least likely to be using contraception, despite wanting to avoid pregnancy. The availability of family planning facilities will have a direct impact on population growth, and hence, emissions.

The UNFPA makes five recommendations to bring us “back from the brink”. It suggests that a better understanding of population dynamics, gender and reproductive health should form a basis for climate change and environmental discussions at all levels.

It advocates for fully funded family planning services and contraceptive supplies within the framework of reproductive health and rights, to assure that low income is no barrier to access.

It proposes that research and data collection be prioritised in order to improve the understanding of gender and population dynamics in climate change mitigation and adaptation. Existing research is heavily based on projections and estimates, and research is required to fill in the gaps.

It warns that we must prepare now for increases in population movements resulting from climate change, and improve the disaggregation of data by sex that is related to migration flows influenced by environmental factors.

Finally, it emphasises that we must make conscious efforts to integrate gender considerations into global efforts to mitigate and adapt to climate change.

The report calls for governments to remove obstacles to women’s participation in the climate change debate – not only within legislative bodies, but through improving the life conditions of women – especially those related to education, health and opportunity – allowing them to reach for and achieve personal and collective goals.

Greater representation of women within civil society at formal climate change negotiations is a critical first step, but the report goes on to say that “Women’s voices will need to be forceful and heard, from tribal councils to national energy ministries, to the halls of the United Nations.”

Thoraya Ahmed Obaid, UNFPA’s Executive Director, suggests in the foreword that the most effective solutions to climate change “will be the ones that come from the bottom up, that are based on communities’ knowledge of their immediate environment, that empower – not victimise or overburden – those who must adapt to a new world… The only lasting solution will be one that puts people at its centre.”

The report is fundamentally about people, and how people – not only through the development of technologies that aim to cope with climate change, but through harnessing the full potential of populations, including the poor and vulnerable – can have a positive effect on environmental and development outcomes.

Makinwa calls on the negotiators in Copenhagen to consciously focus on vulnerable populations, especially taking into account the gender dimension of climate change. He insists, “Women must be included at all levels… It will not happen by chance – it has to be deliberate”.

“As we face the brink of disaster, our future as humanity depends on unleashing the full potential of all human beings, and the full capacity of women, to bring about change,” Makinwa told IPS.

“People cause climate change. People are affected by it. People need to adapt to it. And only people can stop it.”