KARACHI, Apr 30 2010 (IPS) - Perween Riaz, 36, waited till after she gave birth to her sixth child before she finally got herself sterilised. 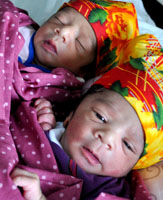 Before then she had undergone a total of four abortions in a span of six years despite her basic knowledge of contraceptive methods and the risks of abortion.

“It was after I got pregnant for the fifth time that I decided to terminate my pregnancy,” said Riaz, who added that she sought the help of an untrained ‘dai’ (traditional birth attendant) to perform her first and succeeding abortions.

Her abortions were followed by two more pregnancies before she finally decided to undergo a medically safe and permanent contraceptive procedure.

Riaz lives in a low-income settlement in the southern port city of Karachi with her husband and children, including a divorced daughter and her two- year-old grandson.

According to the latest Pakistan Demographic and Health Survey (PDHS 2006- 7), women in Pakistan have about four children although they want only three, or less. Moreover, only 22 percent of married Pakistani women (ages 15-49) use modern methods of family planning (FP), with sterilisation (8 percent) among the most popular of them, followed by the use of condoms (7 percent).

While women want to limit family size, almost 84 percent of them do not use any FP method, according to the PDHS. These women have an “unmet need” for FP, because they lack access to contraception. Many rural areas do not provide reproductive health care. As such, one out of every three pregnancies is unplanned.

Riaz said going to a health centre from her village was not easy due to constraints on women’s mobility. She got her first abortion when she was on birth control pills, which she was taking intermittently.

“Women often forget to take pills regularly. We get so caught up with work, both at home and out in the fields that we lose track of the time,” she said. In the process, they also ignore their reproductive health and well-being as well as end up having unplanned pregnancies.

About 900,000 abortions are carried out annually, based on a 2004 study of the non-governmental Population Council of Pakistan. Almost 200,000 women – over 30 years old and with at least three children – turn to hospitals for complications from unsafe abortions.

In his recent blog post, James Gribble, vice president for International Programmes at the Population Reference Bureau (PRB), a Washington, D.C.- based research organisation that monitors population trends around the world, said: “It isn’t until women have three or more children that they really begin to think about FP. After having five or more children, women opt for sterilization.”

On Apr. 21, the PRB launched its ENGAGE (Eliminating National Gaps – Advanced Global Equity) project in Karachi, with the aim of “creating an enabling environment for strengthening family planning and selected reproductive services.”

The project also seeks to raise the “visibility of unmet need for family planning and high levels of unplanned pregnancies, and their costs, consequences, and solutions”.

At present, Pakistan has the sixth largest population – 180 million – in the world. If women continue to have at least four children, the country’s population is projected to balloon to over 450 million by 2050, according to the United Nations.

A new draft of the Population Policy 2010 Pakistan aims at reducing fertility to three births per woman by 2015. Such a goal has been attained by countries like Iran and Indonesia.

Iran’s total fertility rate – the average number of children born to a woman in her childbearing years – declined from seven to less than three in 2001, with 73.8 percentage of couples using modern methods of contraception.

Indonesia brought down its fertility rate from six during the 1960s to between two and three by 2003. Some 58 percent of married couples use modern contraception methods in this South-east Asian country.

“The runaway population is the mother of all problems,” said Dr Babar Sheikh, assistant professor and director of the Health Policy and Management Programme, at Aga Khan University Hospital, during the ENGAGE launch. He said since addressing the women’s reproductive health issue seems to be lost on the Pakistani government, it is time to take it out of the health silo and view it from a development angle.

Sheikh warned that Pakistan is already on the verge of water scarcity and a serious food shortage. Already, three out of five Pakistanis live in poverty, experts say. This means half the population lives on less than two U.S. dollars a day. Riaz’s family lives on just 88 cents daily.

“By managing the size of the population, we can address these issues and contribute to Pakistan’s development,” said Mehtab Rashidi, vice president of the Family Planning Association of Pakistan-Rahnuma in Karachi. “We can start by meeting the reproductive health needs of Pakistan’s couples so they can plan and space their children.”

“If the government increased investment in FP planning by $136 million between 2007 and 2015, which would satisfy the unmet need for FP planning, substantial savings could be realized,” said the fact sheet of the ENGAGE project.

“By 2015, the government could have saved about $400 million, which is about three times the amount it would have spent.”