BUENOS AIRES, Apr 8 2010 (IPS) - Invisible beneath a vast area of Argentina, Brazil, Paraguay and Uruguay, the Guaraní Aquifer is one of the world’s largest reserves of freshwater. Despite supplying water to millions of people, it is neither contaminated nor overexploited. 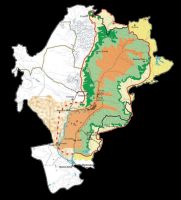 “The general health of the aquifer is good, but it is essential to take care of the areas where it is recharged” in order to prevent contaminants from agrochemicals or waste from human settlements from filtering in, Jorge Santa Cruz, an Argentine expert in geology, told Tierramérica.

Santa Cruz, professor at the University of Buenos Aires, served from 2003 to 2009 as the technical coordinator of the Project for the Environmental Protection and Sustainable Development of the Guaraní Aquifer System, under the four countries that sit above the reserve and which make up Mercosur (Southern Common Market).

The governments of the bloc pledged to care for the aquifer and to continue joint efforts for better management, stated Uruguayan officials in late December in Montevideo when they presented the results of the study financed by the Global Environment Facility, which in turn is administered by the World Bank.

Santa Cruz pointed out that 97 percent of the planet’s water is saltwater. Of the remaining three percent that is freshwater, 70 percent is found in glaciers and the polar caps, 29 percent is underground, and one percent is lakes, rivers and streams.

“Two billion people rely daily on subterranean water, as does most irrigated farmland and countless industries around the world,” but in general the concern is centred on the water resources that are visible, commented the expert.

The Guaraní is one of the world’s largest aquifers. It covers 1.2 million square kilometres in the South American southeast, between 12 and 35 degrees latitude south, and 47 and 65 degrees longitude west, according to official data.

The permanent volume of water is estimated at 45,000 cubic kilometres, with 200 cubic kilometres recharged per year. In some places it extends towards the earth’s surface, at just 50 metres underground, and in others it is 1,800 metres deep.

The aquifer’s water becomes salty in some areas, and in others can have arsenic or fluoride, and is not potable, but can be used for other purposes, such as energy production.

“The aquifer is excellent for urban water supply, but it must be well managed and care must be taken where it nears the earth’s surface,” said Uruguayan hydrologist Danilo Antón, who proposed the name Guaraní and worked on the project.

The reserve is fed by rivers and streams, and by rainfall in the areas where it is nearest the surface, which is also where contaminants can filter in, he explained to Tierramérica.

The experts also noted that Brazil is the Mercosur member that makes most use of the aquifer for potable water, with thousands of wells for about 500 cities. The largest that uses the aquifer as its sole supply of water is Ribeirão Preto, home to one million people.

There are some 200 wells in Paraguay to supply rural populations and for agricultural use. In Uruguay, there are 135, many of which are found at hot spring resorts because the water naturally reaches temperatures warmer than 40 degrees Celsius.

The issue on which there is disagreement among the experts is the geothermic exploitation of the waters, such as in the thermal areas of northwestern Uruguay, or other sites where aquifer water temperatures reach 65 degrees.

Antón believes that for such use to be profitable, the temperatures would have to be higher. But Santa Cruz maintains that it could be used as a source of energy for smaller local enterprise, such as meatpacking plants, poultry or fish farming and plant nurseries.

The ideal, according to Santa Cruz, “is to seek alternative uses for the aquifer, in addition to potable water or thermal spas.”

The risk of contamination comes mostly from urban zones, due to the possibility of leaks from sewage tanks and runoff from industries.

Antón pointed to the situation of rural areas in Paraguay. “The excess of fertilisers or insecticides where the aquifer comes to the surface could be a threat because the aquifer is very porous.”

But he also sees the aquifer as being “underutilised.” With powerful extraction pumps in some areas, 200,000 litres per hour could be obtained, compared to 10,000 currently.

With greater exploitation, there is greater risk that extraction could surpass the aquifer’s recharging capacity – as occurs in the U.S. aquifer Ogallala, where “irrational use” could mean an end to its productive use within a few decades, Antón said.

The Guaraní is “an extraordinary resource… and much more known about it” than a few years ago, he said. But some mysteries remain that could not be solved by the study, so the idea is to continue the research – but now it is up to each of the Mercosur countries.