PORT-AU-PRINCE, May 18 2010 (IPS) - There are shortages of lots of things in Haiti: clean water, arable land, trees, living-wage jobs, housing, schools, fuel, reliable sources of electricity and Internet access. But one thing Haiti has in abundance is sunny days. 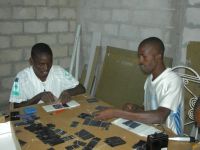 The sun beats down relentlessly on Port-au-Prince: on the tin and plastic roofs of the shacks in the neighbourhood of Cité Soleil (not without reason named “Sun City”) and on the red tiles of the mansions in the hills in the suburb of Pétionville.

Even when clouds roll in from the Caribbean, the sun heats the water droplets and turns Haiti into an enormous sauna.

Haiti’s solar potential is an estimated six sun-hours in the dry season, about the same as that of Phoenix, Arizona, the sunniest U.S. city. In the rainy season it’s not much less.

For the poorest country of the Americas, one with no oil, a crippling dependency on imports, and a landscape denuded in part by charcoal production, harnessing an abundant and free resource to generate power would seem a no-brainer.

And no doubt this idea has occurred to many people. But it took Jean Ronel Noël and Alex Georges to turn the obvious into reality. Starting six years ago, after graduating in engineering and business administration, respectively, from Canadian universities, Noël and Georges put their heads together to find ways to bring jobs to Haiti.

The idea behind ENERSA originated with a friend they had in common. His mental “light bulb” turned on while standing with Noël under a broken streetlamp.

In addition to the benefits of clean energy, the two Haitian entrepreneurs hoped to employ and transfer skills to young people in a country where the jobless rate is estimated at 70 to 80 percent, and where, for those lucky enough to have a job, the minimum wage was raised last year from 1.75 to 5.50 dollars per day.

They were also doing their part to reverse the brain drain that has long plagued their country. “We don’t just make solar equipment here,” Noël told Tierramérica. “We make citizens. People have to feel they have a future in Haiti.”

The firm began as a research and development effort in a business incubator that provided a low-rent space for three years and guidance in how to run a business in Haiti. This support came from the faith-based non-governmental organisation Haitian Partners for Christian Development, located in Varreux, an industrial area of Port-au-Prince.

Despite the political upheavals in 2005 and 2006 that forced them to close temporarily, in September 2009 they were able to move out on their own to their current location. The factory is a modern concrete-block warehouse with a steel frame and 930 square metres of floor space, located in the capital’s outskirts.

The business, which reported just 40,000 dollars in sales in 2007, is projected to see sales totalling 2 million dollars for 2010. ENERSA sells to the government, NGOs and the private sector, but so far only in the domestic market.

To date, ENERSA has installed more than 500 solar streetlamps, which run about 1,400 dollars each, in 60 towns. But their long-term target is 35,000 streetlamps in 500 municipalities.

A pile of concrete rubble sits in the factory’s parking lot, a reminder of the Jan. 12 earthquake that wreaked havoc on Port-au-Prince and surrounding areas, leaving a death toll of more than 220,000 and damages worth 7.8 billion dollars.

One exterior wall of the warehouse and all of the interior rooms, which had been built of concrete block, were destroyed. But all of the employees survived unharmed.

Despite the destruction, many of ENERSA’s streetlamps shone through the night.

“People formed their own refugee camps around those streetlights before the outside aid groups ever showed up,” Richard J. Komp of the U.S.-based Skyheat Associates, told Tierramérica. Komp is a global expert in solar energy who mentored Noël and Georges.

Three months after the quake, ENERSA had risen from the ashes, rebuilding the factory, and once again producing solar streetlamps – and now looking to expand the products the company offers.

ENERSA’s 22 employees are mainly young men from nearby Cité Soleil. Most of them have had little schooling, so Noël and Georges train them for several weeks in technical skills. Without these jobs, Noël says, their most likely alternative for making a living would have been to join a gang and sell drugs.

According to Noël, ENERSA is the only firm that manufactures solar streetlights in Haiti, although two other firms distribute them here. Steel tubing and sheet metal for lamp poles and mounts are sourced from Haitian suppliers, along with any other parts they can find domestically.

Komp trained the ENERSA staff how to manufacture their own photovoltaic modules, the solar panels mounted on rooftops that convert sunlight to electricity. The firm has to import the components from the United States.

ENERSA also builds its own simple inverters, devices that control the voltage for cell-phone charging circuits.

A recent innovation is a box with electrical outlets, mounted near the bottom of the streetlamp post. There, people can recharge their cell phones, which are ubiquitous in Haiti.

Last Christmas, ENERSA gave motorcycles to four of its outstanding employees. Now they are circulating through Cité Soleil as proof of the possibility of making a decent living at a good job in Haiti.