REYKJAVIK, May 12 2010 (IPS) - Vigorously pursuing those allegedly responsible for Iceland’s 2008 financial crisis, investigators have got issued an international arrest warrant against Sigurdur Einarsson, chairman of the board of governors of the failed Kaupthing Bank. 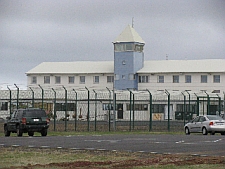 The prison where some of the Kaupthing bank officials are being held. Credit: Lowana Veal/IPS

An Interpol notice on Tuesday said Einarsson was wanted on charges of counterfeiting, forgery and fraud.

Einarsson, who lives in London, was said to be reluctant to come to Reykjavik for fear of being arrested and Icelandic authorities have refused to offer any assurances.

Curiously, in December, Britain’s Serious Fraud Office had opened an investigation into suspected fraud by Kaupthing while trying to attract British investors to its high interest deposit accounts.

On May 6 two former top officials of Kaupthing, formerly Iceland’s largest bank, were called in for questioning by Iceland’s special prosecutor and were then detained in isolation at the main Litla-Hrauni prison in the southern part of the country.

Hreidar Mar Sigurdsson, former CEO of Kaupthing, was placed on 12 days in remand, while Magnus Gudmundsson, former director of the bank in Luxembourg, was remanded to seven days in custody.

Kaupthing, Glitnir Bank hf and Landsbanki Islands hf collapsed in October 2008 after running up total debts worth 61 billion US dollars, calculated as being equivalent to 12 times the country’s GDP.

The government was compelled to take over the three banks and seek an International Monetary Fund bailout as Iceland fell into a deep economic slump, triggering public outrage.

Special Prosecutor Olafur Thor Hauksson was appointed in January last year to investigate suspected criminal actions around the time of the collapse of the banks in October 2008.

“We are researching alleged market abuse by Sigurdsson and Gudmundsson, along with illegal loan granting and breach of trust,” said Bjorn Thorvaldsson, one of the prosecutors who works at the Office of the Special Prosecutor (OSP), when asked why the two men were taken into custody.

However, the arrests would not have been possible had it not been for the Parliamentary Althingi’s Special Investigation Committee (SIC), which published its report on the causes behind the 2008 collapse of the Icelandic banks on Apr. 12.

The authors of the report interviewed people from banks, government ministries, the Financial Supervisory Authority (FSA), the Central Bank of Iceland (CBI) and other bodies, although it states that “the Commission was not expected to address possible criminal conduct of the directors of the banks in their operations”.

Amongst other things, the report summary says: “The banks had invested their funds in their own shares”, and “the banks held a lot of their own shares as collateral for their lending. With share prices declining, the quality of their loan portfolio declined. This could in turn affect the banks’ performance and, consequently, the price of their stock. Additionally, the employees of the banks in many cases owned significant shares in their own bank, sometimes even financed by the bank itself.”

Hauksson’s team used information found in the report, widely acclaimed by Icelanders as thorough and hard-hitting, to build on its case for questioning Sigurdsson and Gudmundsson.

According to the Icelandic State Broadcasting Service, at a meeting between Joly and Icelandic Prime Minister Johanna Sigurdardottir, four days after the publication of the SIC report, Joly said she was pleased with it and called it “extremely well researched’’ and giving ‘’investigating bodies a true picture of the lead-up to the economic collapse”.

Top Kaupthing officials expected to be interviewed this week include Ingolfur Helgason and Steingrimur Arason, who now run the financial advisory company Consolium in Luxembourg. They arrived in Iceland on Monday.

Officials of companies that Kaupthing had been dealing with immediately before the collapse of the bank have also been interviewed.

Thorvaldur Gylfason, economics professor at the University of Iceland, has publicly encouraged the Icelandic authorities “to seek assistance from Poland on how to deal with the seven politicians and public officials found by the SIC to have ‘shown neglect’, a polite way of referring to gross dereliction of duty.”

“The Polish parliament recently passed legislation to curtail the self-dealt pensions and related privileges of 40,000 former agents of the security services. Their pensions had on average been three times those of ordinary Poles. In view of human rights considerations and retroactivity, such legislation needs to be carefully crafted,’’ Gylfason said.

Gylfason reference was to the main conclusions of the SIC that Geir Haarde, Arni Mathiesen and Bjorgvin Sigurdsson – then prime minister, finance minister and minister of business affairs respectively – showed negligence “by omitting to respond in an appropriate fashion to the impending danger for the Icelandic economy that was caused by the deteriorating situation of the banks.”