MANZINI, Swaziland, Jun 19 2010 (IPS) - A proud mother, Nonhlanhla Mabuza cuddles her one-day-old baby boy, at the circumcision clinic of Raleigh Fitkin Memorial (RFM) Hospital. A day after delivering her second son, Thabiso Dlamini, the 20-year-old mother is not only beaming because she has just successfully delivered her tiny little tot – her bundle of joy has just undergone male circumcision. 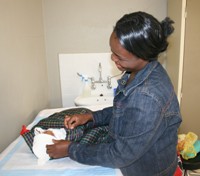 Nonhlanhla Mabuza with her baby, Thabiso Dlamini, after the circumcision. Credit: Mantoe Phakathi/IPS

“I’m happy that my boy will be less exposed to sexually transmitted infections as he grows up and becomes sexually active,” said Mabuza.

Neonatal male circumcision is a new concept in the Kingdom with the highest HIV/AIDS prevalence in the world. About 26 percent of the reproductive age group between 15 and 49 years old is infected with the virus that causes AIDS.

She said she decided to have her baby’s penile foreskin removed after attending antenatal care classes at the hospital. Now her boyfriend wants to circumcise together with their six-year-old son.

But the service is not accessible in all public health facilities for now.

According to Faith Dlamini, the head of programmes-coordination at the National Emergency Response Council on HIV/AIDS, to provide safe neonatal male circumcision healthcare providers should be adequately guided and trained.

“That being the case, the programme rollout started in some facilities such as the RFM hospital,” said Dlamini.

Globally there is evidence that male circumcision reduces chances of getting HIV by 60 percent in men.

With adult male circumcision, clients are expected to undergo HIV counselling and testing first. But adults are not discriminated on the basis of being HIV positive.

To date, emphasis has been placed on the developing and scaling up of programmes for adult male circumcision in Swaziland. The country seems to be winning the drive in getting more men circumcised, said Bongiwe Zwane, the public relations coordinator at the Population Services International-Swaziland, an international NGO.

"Since we started the programme last year in June we already have circumcised over 6 000 men at our clinic," said Zwane.


“In Swaziland we are fortunate that we don’t have traditional male circumcision providers,” said Dlamini.

Until now, the main target for male circumcision has been men aged 15 and older because, according to United Nations Children Fund (UNICEF) HIV/AIDS specialist Dr Fabian Mwanyumba, this group is already sexually active and needed to be targeted immediately.

“We started by circumcising adult males as an emergency measure because they are already at risk,” said Mwanyumba. “Now we want to also focus on infants as a long-term measure of male circumcision as an intervention against HIV/AIDS.”

UNICEF donated the male circumcision clinic to RFM in 2009. So far 183 babies have been circumcised at the clinic. Infants aged between 12 hours and eight weeks qualify for neonatal male circumcision.

Bitchong said the healing process usually takes 48 hours for infants unlike in adults where they are supposed to delay any vigorous exercise for two weeks. Adults are also supposed to abstain from sex for six weeks after the procedure to allow the penis to heal properly.

“Circumcising infants is less costly than adults because in neonatal (circumcision) we use a device that is quick and easy to operate,” said Bitchong. “Adult male circumcision is done at the theatre and this requires more space and personnel.”

Infants aged between zero and eight weeks are given a local anaesthesia to ease the pain, said Bitchong.

“But for those above eight weeks they have energy and they fight during circumcision. Therefore they need to go to theatre for a light general anaesthesia. That requires specialised equipment and more people to work on the circumcision,” said Bitchong.

“We also target mothers who bring their babies for the six-week vaccination,” said Lukhele.

At first, mothers were a bit reluctant about the idea of getting their babies circumcised because they were not informed about the benefits of this programme. When the programme started, Lukhele said, the clinic used to see between 10 and 15 clients a month.

“But now we see an average of 25 neonatal clients every month,” said Lukhele.

In the meantime, UNICEF is expanding the number of neonatal male circumcision clinics to other public hospitals and clinics throughout the country.

More mothers, like Mabuza, will be smiling from ear from ear as the programme moves to other public health facilities so that more children can be circumcised.