BRAZIL: Football Paves the Way to Masculinity Without Violence

RIO DE JANEIRO, Jul 19 2010 (IPS) - It’s Friday night, and in a “favela” (shanty town) in this Brazilian city, a group of men relax with a beer after a hard week, while a song can be heard above the rowdy chatter. 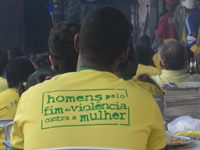 'Men for an End to Violence against Women', a slogan on a T-shirt in Santa Marta. Credit: Fabiana Frayssinet/IPS

The lyrics, set to a samba rhythm, are about typical topics like football and women, but also about gender violence. They mingle with the smoke from an “asado,” where meat is roasting over a makeshift grill on the pavement. This is Santa Marta, a favela in the south of Rio de Janeiro.

Many people are following the beat and singing along with the song, which speaks of a man who has a row with his wife because in her anxiety over paying the rent, she forgot to wash his football kit.

“Problems between a husband and wife are normal. But don’t cross the line into verbal or physical aggression,” repeats the catchy refrain.

The song is part of the strategy of Promundo, a non-governmental organisation, aiming to raise the consciousness of men in Santa Marta, using two of Brazil’s cultural icons, football and music, to address another of its leading concerns: women – but with a difference.

This samba is also the informal anthem of a football tournament which has been taking place for the last six months in this favela of 10,000 people atop a steep hill in Rio. Anyone who wants to can play, with only one condition: they must participate in a workshop about violence against women and about masculinity.

“The project broke all precedents by talking about these issues man to man,” said Gilson*, a 32-year-old rap singer, on the evening IPS joined with some of the 119 participants in the Santa Marta workshops.

“You get to do what you like most, which is playing football,” Gilson added, and proudly pointed out a photo of himself wearing the team jersey, with a slogan against violence against women on the back, which was published in a community newspaper by Promundo, an organisation with nationwide scope.

Leaning against the bar, Gilson chats with other players about the tournament final. “Let’s have an ‘asado’ here in the favela, for everyone,” proposes Samuel Marques, one of the community coordinators.

Marques, who is from Santa Marta, recalled that at the beginning no one wanted to put their names down for the group workshops, which dealt with issues like gender violence, sexuality, the division of labour in the home, men’s health and homophobia.

Fabio Verani, a senior programme officer with Promundo, said “the idea is to involve men in discussion about gender equity,” and is part of the White Ribbon Campaign (WRC), a movement against sexist violence initiated in Canada in 1991 that has since spread to many other countries.

Eventually, the workshops attracted mass participation with only occasional absences from the sessions. It was “a huge achievement,” said Marques.

Leandro, a 29-year-old married man and father of four children, who is currently unemployed, said that at first he was extremely wary of telling others in the group about his personal life. “Talking about what happens at home, in your private realm, is difficult at first,” he said.

But with time “it became easy,” and he learned to see the relationships between couples and within families differently. “It’s not just women who have to learn how to look after the children, but men too. Just because the man puts the rice and beans on the table doesn’t mean he has no further responsibilities in the home,” he said.

Now he takes his children out to the playground so that his wife can study at home; he reads them stories, and plays with them. “My daughter makes pretend meals and says, ‘eat, Daddy’, and I eat,” he says. “The meetings opened my mind to new ideas.”

Marques described the process of attitude change in men, saying that first the socially imposed model of behaviour has to be taken apart. This model, reproduced by men, by women, the family and institutions like the church, teaches that the masculine role in the family is that of only “protector and breadwinner.”

Verónica Moura, another community coordinator, said violence against women is fuelled by what she called a “machista society.”

“It can arise from the domestic situation. The father may physically attack the mother, or the mother assaults the father, and the children go on to do the same to their sweetheart or spouse, because it is what they have seen since they were born,” Leandro said.

Verani says he is surprised by the number of men who are unaware that they themselves exercise violence, and see it as socially acceptable.

Promundo found that between 20 and 25 percent of men in the group meetings all over Brazil recounted their own acts of violence against the women they live with.

Marques stressed that many men think that hurling insults is not violence, and others justify their violence as a way of “disciplining women.”

In Brazil, since 2006 the “Maria da Penha Law” has condemned violence against women and the family, and includes prison terms of between three months and three years if someone is injured.

Gilson, the rap singer, admits the workshops “were my salvation, because I did not want to be violent, but I didn’t know how to change my ways.”

“I have met up again with ex-girlfriends who at one time used to drive me up the wall. But now I reflect and calm myself down,” he said with elation. Male aggressiveness, he said, is due to men being “closed-minded because of ideology.”

“People stop by the bar and talk about football and women, but no one ever talks about sexuality, or the children, or helping with the chores at home,” he said.

Gilson is aware that violence cannot be ended overnight. But he said “the issue can be worked on with the children who are tomorrow’s adults, by talking to them about sexuality, about violence against women, about raising the children together.”

Promundo plans to evaluate the workshops when the tournament ends in late July, but there are already visible results. “This football tournament is one of the most peaceful in the history of Santa Marta,” Verani said.

Ana Claudia Pereira, a consultant on gender violence at the Centro Feminista de Estudos e Assessoria, which works for gender equality, told IPS that projects like this one are important for “attracting men to the debate.”

However, she expressed criticism that “often in an emergency situation, when a woman’s life needs to be saved and when there are such limited resources for implementing public policies, the need to redouble help for the victim and the preservation of her physical integrity can be overlooked.”

* The surnames of the workshop participants have been withheld at their request.